Belfast side head back up the road with a victory 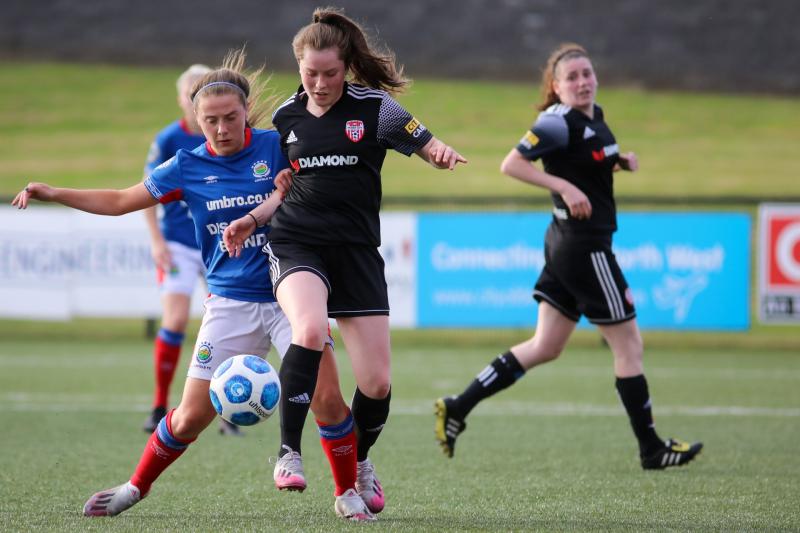 Derry City suffered another difficult evening at the Brandywell last night as they were beaten 4-1 by Linfield.

The opening twenty minutes were an even contest and both sides equipped themselves well, with few chances.

The impressive Rebecca McKenna had the first shot in anger on 12 minutes for the visitors, but her effort sailed hopelessly wide.

The deadlock was broken on 19 minutes, as Derry City's Caroline Gallagher unseated the attention of the Linfield defence, superbly beating Erin McAllister in the Linfield goal.

The joy was short lived though as Rebecca Bassett executed an equally accomplished equaliser on 23 minutes.

Linfield's tails were up and Derry struggled to cover the open spaces of the Linfield shadows.

A slightly fortuitous second on 33 minutes by Kate Dickson, signalled the pattern for the remainder of the game.

As the ball trickled across the Derry six-yard line, Derry second guessed every needed action and never got a second chance. Dickson stole in to put the blues in front.

Bassett doubled the lead on 50 minutes and would remain a constant threat for the remainder of the game.

Derry continued to counter-attack, often with the high ball aimed at the energetic Paula McCrory.

That threat was effectively nullified on 67 minutes when Victoria Carleton somehow managed to win three consecutive second balls on the edge of the Derry box, to effortlessly hit the back of the Derry net.

On 82 minutes, Linfield were awarded a penalty after Bassett was adjudged to have been fouled by Kathryn Canavan.

On 83 minutes, with more orthodox hands on head, Bassett knew she had failed to add to that all important, end of season goal difference.