Nine people arrested, including several in Derry, during a massive police operation against the INLA

Searches linked to drug-dealing activities of the republican group 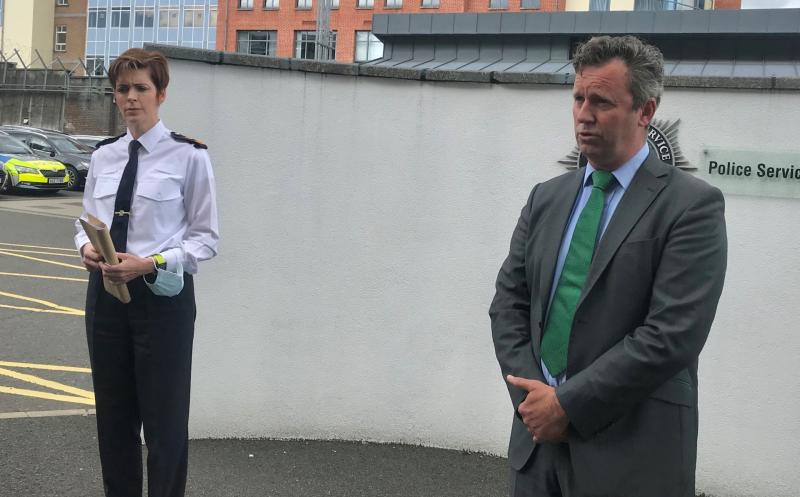 PSNI Detective Chief Superintendent John McVea and Superintendent Goretti Sheridan from the gardai speaking at a press conference this afternoon about the joint operation.

Eight men and one woman have been arrested during a massive cross-border police operation against drug-dealing activities being linked to the INLA.

The operation, which involved up to 200 officers on both sides of the border, has taken place over the last two days.

A number of the searches took place in the Galliagh area of Derry.

Gardai officers conducted searches in the Buncrana and Kerrykeel areas of County Donegal.

Searches were also carried out in Dublin as part of the operation.

The PSNI today said that all nine people arrested were arrested on the northern side of the border.

The suspects, aged between 27 and 42, were arrested in the Derry and Limavady areas yesterday and today.

The woman has been released on street bail and all eight men remain in custody at this time.

A large quantity of drugs and cash were seized during the searches.

Detective Chief Superintendent John McVea, Head of Criminal Investigation Branch said: “The INLA in the North West are involved in all forms of criminality including the organised illegal supply of controlled drugs.

"This operation looks to take action against those involved in this illegal drugs supply.

"These criminals don’t care about the wider impact their drug dealing will have on the wider community and public services.

“They do not care about the harm and devastation they cause, all they want is to make money by whatever means they can.  They prey on the most vulnerable in our communities, using fear and intimidation, callously exploiting peoples’ vulnerabilities in the most despicable ways possible.

"The money they take from people who may be struggling financially, is used to line their own pockets and feed their own greedy needs.

“They use violence indiscriminately to control the community, stopping people giving information to police, leaving them free to exploit ordinary people in the areas where they operate.

“This operation is a prime example of how the Joint Agency Task Force (JATF) works on the ground to tackle organised and cross jurisdictional crime.

"The Cross Border JATF continues to provide opportunities for, and promote real time collaboration, between An Garda Síochána and the PSNI in our combined efforts to frustrate, disrupt and dismantle the activity of organised crime groups." Garda Superintendent Goretti Sheridan said: “This operation has been ongoing since the summer of 2020 where An Garda Síochána and the PSNI have been liaising and gathering intelligence regarding the unlawful activities of the INLA, an unlawful organisation, and their involvement in the sale and supply of drugs in the North Western part of the Country on both sides of the border.

"This is a borderless crime and is imperative we in An Garda Síochána work closely with our colleagues in the PSNI in order to combat the sale and supply of controlled drugs which are devastating our communicates.

"The INLA like other gangs involved in drug dealing are making huge profits and benefitting from this legal activity.

"With our colleagues in the Police Service of Northern Ireland we are committed to working together to ensure we keep everyone safe on both sides of the border.

"Our search operation yesterday forms part of our continued efforts to disrupt the movements and activities of organised crime groups and works to reduce and prevent criminal activity in border areas.

"We will continue to work together with our colleagues in the Police Service of Northern Ireland to frustrate and dismantle these organised crime groups.

"Criminals do not recognise borders and through the work of the Joint Agency Task Force we are able to do everything we can to ensure those involved in this type of organised and cross jurisdictional crime are dismantled and dealt with through the criminal justice system."