New Mayor and Deputy appointed in Causeway Coast and Glens

The incoming Mayor quoted Bruce Springsteen in his opening address. 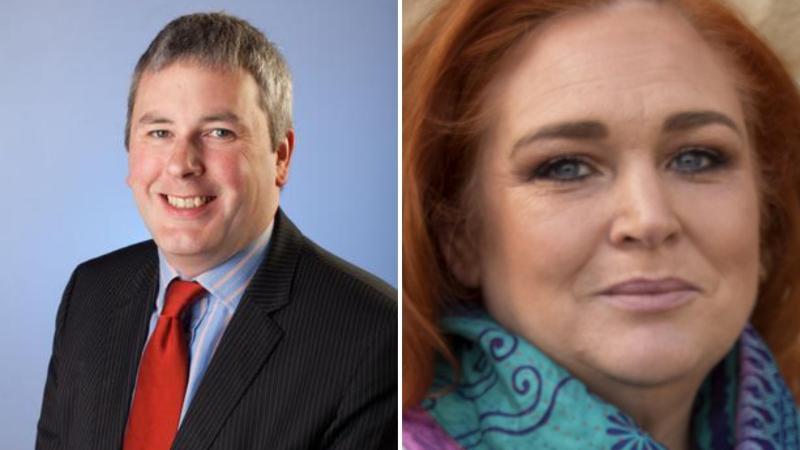 Richard Holmes of the UUP has officially taken the chains as Mayor of Causeway Coast and Glens Borough Council following this evening's annual meeting, with SDLP councillor Ashleen Schenning being appointed as Deputy Mayor.

Cllr Holmes paid tribute to the outgoing Mayor Mark Fielding as he began his address.

"This has been a difficult year for any mayor," he said.

"The last few weeks have been a flurry of activity, with the Mayor and his wife all over the Borough, doing the guts of a year's worth of work in a few short weeks.

"You've made the most of a difficult situation and we'd like to thank you for your stewardship, fairness, integrity and the dignity you showed throughout."

The Bann councillor also said he was 'deeply honoured' to have been nominated by his party colleagues for the role.

"This is not a role I ever thought I would assume but God opens doors and we should make the most of the opportunities He provides," he told the meeting.

"I would echo the tributes paid by the outgoing Mayor to the work of the council staff who have kept vital functions running throughout the pandemic and also to the National Health Service who have been the front-line.

"We should also thank those in retail and industry who have managed to make a way where perhaps 15 months ago it seemed there was no way.

"I know that in this country there is so much that we don’t agree on. Northern Ireland gets called the North, Londonderry – Derry and Causeway Coast and Glens referred to as Causeway.

"Somewhere someone is always feeling irritated. But I think we can all agree on one name – home.

"Bruce Springsteen once sang the lyrics: 'My father said "Son, we're lucky in this town, it's a beautiful place to be born. It just wraps its arms around you, nobody crowds you and nobody goes it alone.

"I know every Councillor is as passionate about their home area as I am about Garvagh. We all love this beautiful place. And we all want to make it the best it can possibly be.

"That means working together to ensure nowhere and no one is left behind. After the year we’ve just had that is more critical than ever as families, businesses and communities recover. As a Council and as Councillors it is our job to lead.

"Our Council is not perfect but it is up to us as leaders to ensure it is the best it can possibly be. Staff should be proud to work for a great organisation and the public should have confidence in our functions and our decisions.

"Undermining that trust helps no one.

"During the incoming year I want to focus on business, communities and tourism. I want us to continue to help locally established businesses and new startups.

"I want us to build our communities making them strong and cohesive. We are Northern Ireland’s jewel in the crown of the tourist industry and we want to see it grow once more."

SDLP councillor Ashleen Schenning has also taken up the position of Deputy Mayor, after being nominated by the party's nomination officer Margaret-Anne McKillop.