Friendships and memories put to one side for crucial promotion showdown 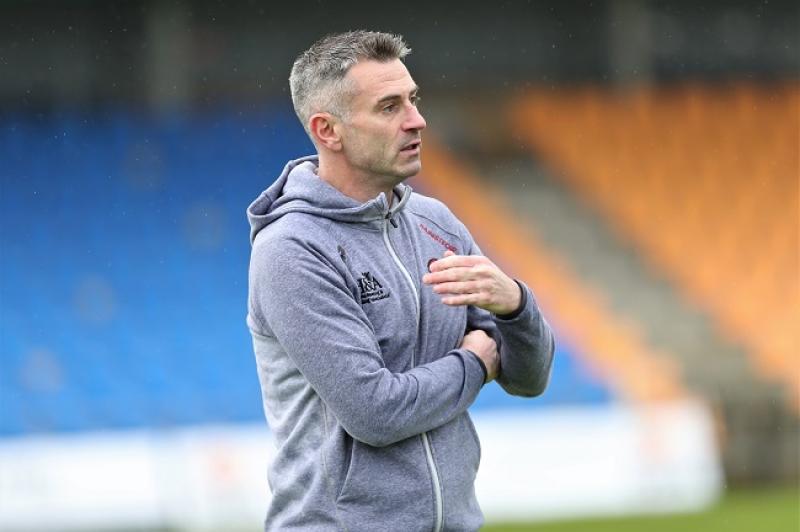 Derry manager Rory Gallagher said 'nice friendships' and 'fond memories' will be put to one side on Saturday as the Oakleafers go in search of back to back wins.
Fermanagh come to Owenbeg on Saturday evening in a top of the table clash and an Ulster derby after their narrow win over Cavan last weekend.
Gallagher, a native of Erne Gaels, took Fermanagh to Division 1 and an Ulster Final during his two-year term. After stepping down, he succeeded Damian McErlain as Derry boss.
After being brought into his management team by Gallagher in Fermanagh, Ryan McMenamin succeeded him as manager.
“I've worked with Ricey (McMenamin) and a number of them. My own brother Ronan is involved,” Gallagher said.
“There are nice friendships there, but they will be set to one side. I have very fond memories and a lot of great days with the players and there is a lot of new players as well.
“That goes out the window, they'll be trying to cut my throat and I will be trying to cut theirs.”
Derry only picked up one point from their opening two games last season and Gallagher felt the 'Gods were against' his side with their 2021 league draw.
“We were very disappointed with the start we got to the league last year. We have to man up to it now and we have to face Fermanagh,” Gallagher added, after Saturday's win over Longford.
Gareth McKinless was replaced during the game with cramp and will be 'grand' for this weekend. Karl McKaigue will be 'in contention' and the Derry boss hopes to have the Slaughtneil man on the bench, while Conor McCluskey (impact knee injury) 'won't be far away'.
Gallagher was 'delighted' with the performance of Conor Glass who kicked two points, the first of his senior inter-county career on Saturday night
“I am just delighted to get him in, he is a brilliant fella, he is a massive addition and he is a physical presence that we didn't always have,” the Derry manager stated.
Summarising their 16-point victory, Gallagher said his side would've have learned the potential they had to do 'very enjoyable things' in football and classed Derry as a 'very good team'.
“We have to prove it every day and commit to each other,” he stressed. “There are very few teams like Dublin, who just win, win, win. You have got to learn how to graft and earn victories. I hope the boys see the potential that we can have.”
Derry were six points clear at half time of Saturday's clash in a rainswept Pearse Park, but Gallagher admitted it should've been more.
"I was bitterly disappointed we only had eight points at half-time, we should've been sitting with 1-11 or 1-12 at our ease and that was relying Niall (Loughlin) kicking a couple of fifties in tough conditions.
"I felt we left scores too easily behind and to be honest, if Longford had been more clinical or when you move up the gears against opposition higher up the divisions we'd have suffered for it."
Derry dipped into their bench on Saturday night, with Ben McCarron notching a point and Conleth McShane coming on to make his debut, a 12th across Gallagher's 11 games in charge to date.
“We brought him (McShane) in last year before the championship, he is a really committed lad. It is a great reward for him, as it is for the others. We want to get as much game time into players, to develop a squad if we can.”
Derry senior hurlers will be back in league action on Sunday against Kildare in Hawkfield (4.00).
After a narrow defeat in Round 1, Derry had a bye last weekend. Kildare's only game so far was their 4-29 to 0-13 mauling of Donegal in Newbridge.
Brian Byrne hit 11 points for the current Christy Ring Champions, with goals from James Burke (2), Johnny Byrne and Conor Dowling.
Derry beat Kildare two years ago and last season's clash ended level thanks to a late Conor Kelly point.
Mayo sit top of the table on four points after back to back wins. In the absence of a league final, only the top team will gain promotion to Division 2A.