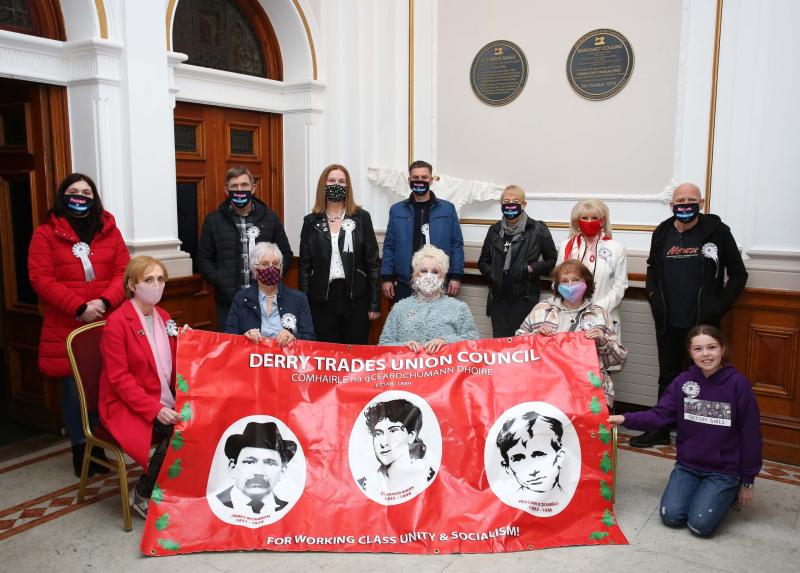 Guests pictured at the unveiling of the plaques.

Plaques marking ground-breaking visits to Derry by two highly revered women’s rights activists more than a century ago have been unveiled in the city’s historic St Columb’s Hall.

The Grade A listed building also known as ‘The People’s Hall,’ was the venue of choice for some of the world’s most iconic performers and notaries after it was built in 1886.

But how many people nowadays know that its remarkable guests included both Emmeline Pankhurst and Eleanor Marx? 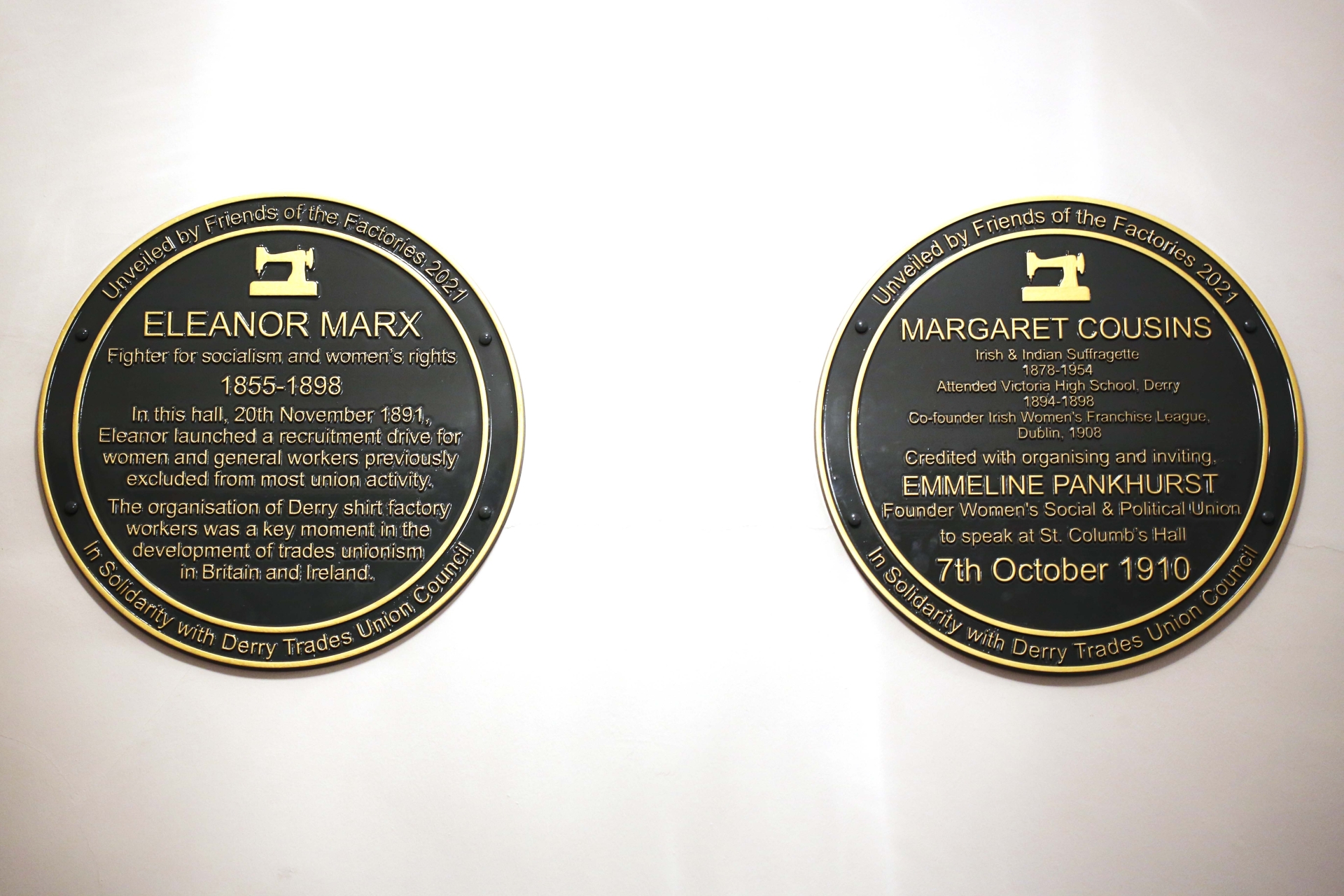 Emmeline Pankhurst (1858–1928) was the leader of the radical suffragette movement that played a key role in helping to win British women the right to vote.

She was founder of the Women’s Social and Political Union and gave a rousing speech in St Columb’s Hall on 7th October 1910.

Friends of the Factories 2021 “in solidarity with” Derry Trades Union Council, organised the placement of two plaques side by side to coincide with events to mark May Day weekend, the annual celebration of workers and union rights across the world.

The plaque erected in memory of Emmeline Pankhurst was a tribute shared with Margaret Cousins, the Irish and Indian suffragette (1878-1954) who attended Victoria High School in Derry. Co-founder of the Irish Women’s Franchise League, Dublin in 1908, she was credited with organising and inviting Pankhurst to speak at St Columb’s Hall in 1910.

The plaque dedicated to Eleanor Marx who visited the Hall almost 20 years before Pankhurst, reads: “Eleanor Marx, Fighter for socialism and women’s rights (1855-1898).

In this hall, 20th November 1891, Eleanor launched a recruitment drive for women and general workers previously excluded from most union activity.

The organisation of Derry shirt factory workers was a key moment in the development of trades unionism in Britain and Ireland.”

"I have been honoured to be part of an initiative made up of so many formidable women, driven by women and achieved by women. We thank the Derry Trades Union Council for their unwavering support of our project, it has got us to the point we have reached today."

As well as the ceremony in honour of the two female revolutionary thinkers who addressed rallies in St Columb’s Hall, plaques to honour the legacy of the workers were also unveiled at a number of former shirt factory sites including Welch Margeston, Sinclair, Ebrington, Rosemount, Hogg & Mitchell and the City Factory.

Anne-Marie Gallagher, Project Director of St Columb’s Hall, said she was delighted that the roles of three illustrious women historically associated with the venue, had finally been etched into the fabric of the building more than a century later.

She said: “These beautiful plaques are very much in keeping with the character of the Hall and add to the already vibrant story of Derry’s built heritage and history. The fact that these remarkable women left such a lasting legacy is very poignant, especially to think that they were standing in here over 100 years ago.

“We are thankful to Friends of the Factories and Derry Trades Union Council for their foresight and determination in shining the spotlight on the somewhat lesser-known connections with this building’s rich history to the wider world.”

St Columb’s Hall is located on the East Wall of the city’s historic Walls and was originally built in 1886 by the St Columb’s Hall Total Abstinence Society as part of the Temperance movement.

Now used as a noted conference and events venue, the building is currently in the midst of a major regeneration project.