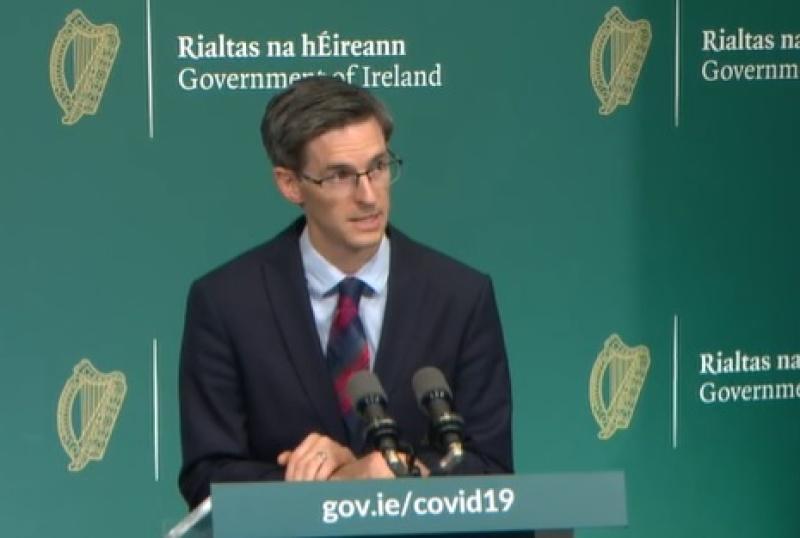 Deputy chief medical officer Dr Ronan Glynn has said Donegal will move out of Level 5 public health restrictions along with the rest of the Republic on Monday amid concerns about the high levels of Covid-19 in the county.

Dr Glynn said he is hopeful that additional measures will not be required for the county in the coming weeks and he is confident that the situation in Donegal will improve quickly.

He was speaking at a press briefing for the media in Donegal on Wednesday following the fallout from comments made by chief medical officer Dr Tony Holohan last Friday about the high incidence of Covid-19 in the county.

There has been a backlash in Donegal to the tone of the comments Dr Holohan made when he said there were concerns about things happening in the county that “even the dogs on the street” know shouldn’t be happening.

Figures released at the press briefing put the national incidence rate in the county at 308 cases per 100,000 people compared to a national rate of 134.

The highest rates are in the Milford local electoral area at 682.6 and the Letterkenny area where the rate is 547.1. The lowest rate in the county is in the Donegal LEA at 79.3.

The briefing was told there were 205 GP referrals for testing in the county on Tuesday, an increase of 52% on the same day last week.

Dr Glynn said the concerns were raised last week so that people can take protective measures and ensure the situation does not get worse.

He said there is a bigger number of smaller clusters in Donegal than in other parts of the country.

“It was not meant as blame. It certainly was not made as a threat,” he said.

“It would be very strange for us to preside over a situation where incidence is very high and increasing in a county and not draw attention to that.”

At the briefing, director of public health for the HSE in the north-west, Dr Anthony Breslin, highlighted a number of clusters that have occurred due to events in the county in recent weeks, including awake, a family gathering and an 18th birthday party.

The events resulted in dozens of cases and infections in workplaces, in families and at a school.

One social gathering has been linked to 84 cases of Covid-19, he said.

Dr Glynn said that there are concerns about the situation in the county and that some people in Donegal have “pushed the boundaries”.

“We are concerned about the current incidence. That is not to say that Donegal has not come a very long way over the past number of months, just as the rest of the country has, and that can only have happened because the majority of people are trying to do the right thing,” he said.

“This is not in any way a reflection on the majority but clearly there are a number of incidents where people have pushed the boundaries.

“We have seen that in other counties, it is not just in Donegal. But I suppose the difference at the moment versus some other places where we have particularly high incidences, is that there are large clusters driving incidences.

“In Donegal, it seems to be a little bit more widespread with a bigger number of smaller clusters which makes it that little bit harder to control.

"So if we can continue to emphasise, and if we can get people who have been pushing the boundaries a little bit just to comply that bit more over the coming weeks, we should see incidence drop quickly in Donegal.”

He said we can not get away from the fact that the high incidence rates in parts of the county are due to the fact the disease is being transmitted from person to person.

“It gets transmitted from person to person when people come into contact with one another and when for whatever reason masks are not worn, distance is not kept, people who are symptomatic don’t self-isolate.

“Right now we are seeing a higher incidence in Donegal than we have in other parts of the country and in that regard, it is incumbent on us as doctors to point out our concerns so that people can take proactive actions because there are many people who remain very vulnerable to this disease over the coming weeks,” he said.

“All we are asking people in Donegal to do is to protect themselves and their families. We are not proposing any different measures for any one part of Donegal as things currently stand, and I would be hopeful and optimistic given the level of engagement over the past number of days that we won't be looking at some sort of additional measures for the county or any part of the county over the coming weeks.”

He said the priority for people over the coming weeks is to meet people outside.

“As far as is possible at all, do not meet up with friends or extended families or do not have parties inside. Inside gives this virus such an advantage in terms of transmission,” he said.