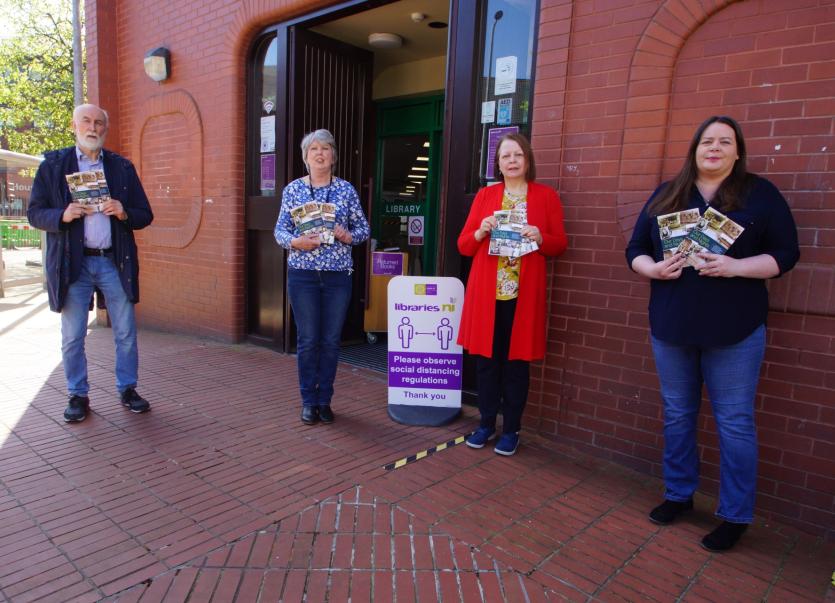 Eamonn Baker and Tracey McRory (far right) pictured on Friday handing over copies of the new book to Linda Ming and Anne Duffy from the Central Library in Derry.

A new book has given people in Derry and Inishowen a chance to write about their favourite memories.

The book is called 'Our Days and Nights'.

In the final few months of 2020, Tracey McRory, a project worker with Inishowen Development Partnership (IDP), gathered people from Derry and Inishowen to take part in a cross-border reminiscence programme jointly facilitated by Anne Tracey and Eamonn Baker.

Tracey said: “We would have loved to have delivered this programme face-to-face but such gatherings proved impossible due to the lockdown restrictions.

“Zoom worked better than we could have hoped however.

“Participants—there were thirty and more- told us that even though they were meeting ‘through screens’, they really valued the human connections that grew from the storytelling, the recall, the craic and the song.”

“These zoom sessions were, by agreement, recorded, the audio faithfully transcribed by Kirstie Wright and then edited by Anne, Eamonn and myself to create a brand new publication ‘Our Days and Nights’.

“It features many of the family stories, tall tales, faery stories, ghost stories, reminiscences, song lyrics, photos shared by participants during the autumn months of 2020.”

Tracey said that Anne Tracey, as well as being a highly regarded psychologist and counsellor, is also a noted singer.

“Her singing brought an extra dimension of warmth to the sessions especially where we listened to local songs and remembered the ‘showband’ scene of the sixties and early seventies on both sides of the border.

“We also reflected on some tough times – living though the Troubles with shootings and bombs an everyday occurrence crossing the border during those precarious times.

“We were privileged to welcome Margo O’Donnell as a special guest during one of the sessions that brought together the Derry and Inishowen groups.

“As well as treating us to a couple of songs, Margo spoke about some of the challenges that she has faced in her life. We all felt moved by her openness and honesty.

“One of the participants, Betty Beattie, regaled us with the following poem during one of our sessions.

“Betty’s poem underlines the challenges Covid has brought and how human contact can make that vital difference.

“I can’t go out, it’s much too wet
I can’t stay in, I would just fret
About the folks I would’ve met for coffee and a chat
So what am I to do?
I’ll do some household chore, no that won’t do, it’s such a bore
I’ve decided just to watch TV, oh no, it’s all shows I’ve seen before
So what am I to do?
Out come the needles, I’ll find something to knit
I’ll try on some clothes to see if they still fit
Oh no, I’m still bored
What am I to do?
And then the doorbell rings
It’s Tilly my friend, and what does she bring?
A bottle of wine, she says, we will enjoy a few glasses
The time will soon pass
We don’t care if it's gonna rain or shine.”

Some limited copies of the new book are available from Inishowen Development Partnership and other copies will be available through the Buncrana Library, Carndonagh Community Library, Free Wee Libraries (at locations throughout Inishowen) and all libraries in Derry.

Remaining copies will be distributed to local care homes and older people projects to be enjoyed on both sides of the border.
For more information about the project, contact tracey@inishowen.ie.