O'Doherty taking everything in his stride 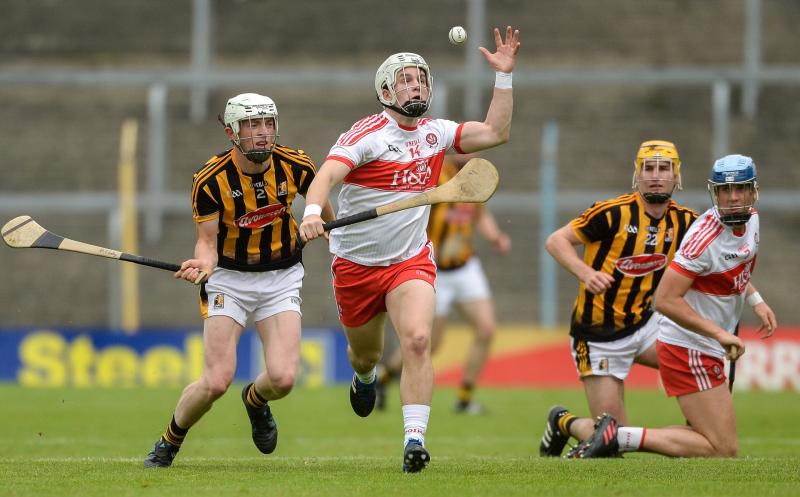 Wise beyond his years. That's always been Cormac O'Doherty. From the U10 playing in goals for Slaughtneil's Féile team, with a stick almost as big as him, to playing in the field at home with his older brothers and sisters, he has always had to learn fast.

He sits relaxed in Owenbeg's canteen. Wearing a customary red baseball hat and the same ice cool look as standing over frees on pitches across Ulster and beyond.

Now 25, he has eight seasons of senior championship hurling under his belt with Slaughtneil and going into a fifth at county level, having been called up by Collie McGurk in Derry's Nicky Rackard winning season. A veteran now.

“Maybe,” comes the reply, with a smirk and the same affable nature in which it was offered.

“It's starting to feel that way, there are a lot of young boys involved so I am getting to the older half of the group now.”

“This is another big step, it is a challenge and something to look forward to...something that hopefully will be a successful one,” he points out.

The new role doesn't bring pressure. The new skipper points to the leaders in the squad that still includes Sean Cassidy, captain under John McEvoy.

“We have a lot of players who have played big games, a lot of leaders and it is up to everyone to step up to the mark,” he adds.

Personally, it's about performing as well as he can. And hopefully the results will fall into place.

Looking ahead, Sunday's Mayo game is as far as he ventures. And looking back, the two promotion finals stick in the throat, but they are yesterday's news.

In the last two seasons, Derry's scoring average was 1-17 versus 1-16 against. The margins are small. Goalkeeper Sean Kelly saved their bacon on many occasions, but at the other end they didn't lift the green flag often enough to trouble teams, when it matters.

O'Doherty is often the man picking open defences for club and county. He feels they need to be more clinical in the final third.

“It's in the tight games, with a point or two each way. It's maybe that we can create them (goal chances), but we didn't take them. It is costly in tight games.”

It will be the third county management he has played under and he is enthused about having Cormac 'Hippy' Donnelly in the frame, who coached Slaughtneil to two Ulster senior titles.

“It is hard to put your finger on it,” said O'Doherty of the input of Donnelly, who was a popular addition with the Derry players.

“Mickey (McShane) had been there and he came in with new ideas to the group and a fresh voice that gave us a bit of renewed energy. A new coach always brings new ideas.

“Then you have Woody's (Dominic McKinley's) success with the (Slaughtneil) camogs, that's two experienced men.

“They were good players and Cormac is new into (county) management, we saw in Slaughtneil what he brings to the setup.

“Then you back that up with Conor (Murray) and Kevin (Hinphey), two players who gave a lot to Derry hurling and have that Derry experience, so hopefully that will stand to them.”

“It is something (to compete in an Ulster championship) that we don't have the opportunity to do any more,” O'Doherty adds.

“He is somebody who had success with Derry senior hurlers and won major honours, it is great to see that and he brings something different to the party as well.”

Of the 11 new players in this year's panel, his brother Oisin makes a return, with Gerald Bradley, Conor McAllister, Niall Ferris and Brian Cassidy.

“It is a strong panel of players,” Cormac states. “Ferry (Niall Ferris) has committed and it is something we have worked on over the past number of years, getting the best players out. We have managed that and it is a good opportunity to take advantage of it.”

It has been something that has been a theme since Collie McGurk took over in 2017, of getting the best players hurling for the county.

“Collie was a big believer in getting the best players on the pitch and we'll see what happens after that.

“Dominic and Cormac have put a very strong panel together, it is up to the players to make use of it.”

Getting off to a winning start in Mayo on Sunday is crucial. Despite the Kildare game poised in the distance as a potential top of the table clash in the group, O'Doherty is keeping his thoughts in the short term. Any mention of the Christy Ring Cup is casually brushed off.

If you start looking too far down the line you'll get caught,” he said. “Our focus is on the Mayo game, if you lose that then you are chasing for the rest of the league, so it is important to get a good start.”