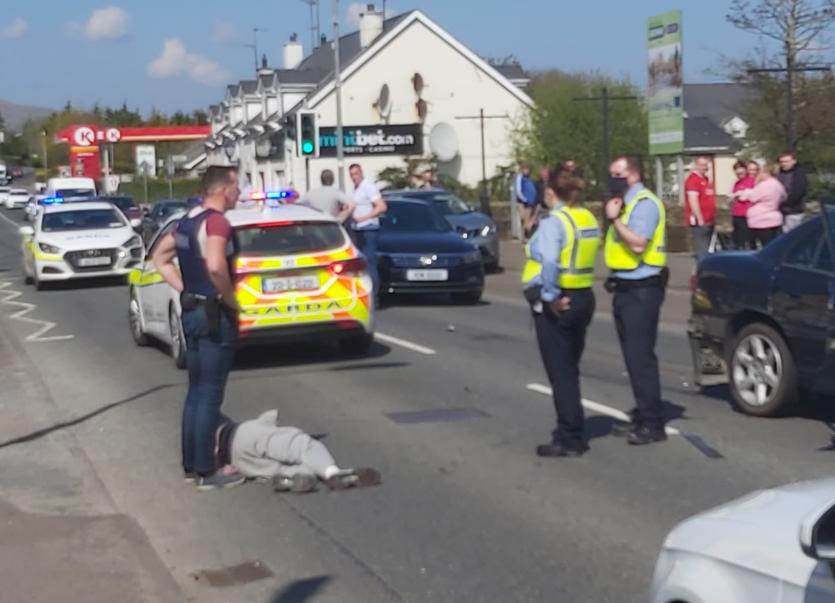 Garda officers surround a man during Sunday's incident in Muff.

A Derry man arrested after he tried to drive through a Garda checkpoint following a 25km pursuit was today refused bail.

Michael Ward, 27,  of 44 Drumleck Drive, Shantallow, Derry, was arrested on Sunday close to the border at Muff.

Ward appeared this morning at Buncrana District Court sitting in Letterkenny via videolink from Castlerea prison.

A previous court hearing was told that five vehicles, including two garda cars, and a building were damaged during the incident.

The accused was arrested after a 25km pursuit from Carndonagh to Quigley’s Point that only ended when he crashed after ramming through a garda checkpoint in Muff at around 2.30pm.

He was arrested after attempting to flee across the border on foot.

A bail application, which included the offer of €2,000 in surety and an undertaking to sign on at Buncrana garda station, was refused by Judge Paul Kelly after gardaí expressed concern that Ward is a flight risk.

Sgt Jim Collins told the court that directions from the Director of Public Prosecutions (DPP) should be at an advanced stage after a two-week remand.

A lot of CCTV footage that should be of assistance is being sought and a number of statements have already been taken, Sgt Collins said.

Ward had been refused bail at a special court sitting on Sunday night.

Judge Kelly said the offer of surety was not enough to meet concerns that Mr Ward remains a serious flight risk.

Ward was remanded in custody to appear at Buncrana District Court via video link on May 10 for directions from the DPP.