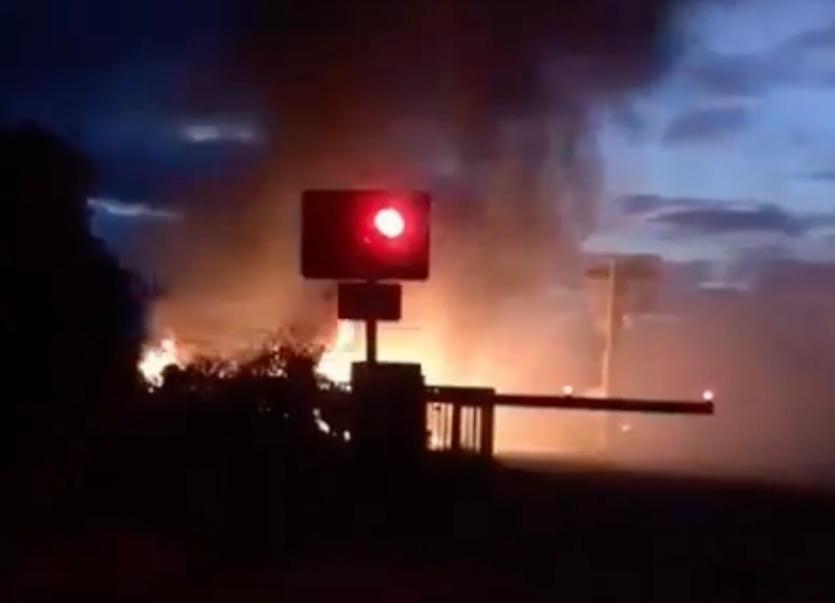 An image from a video of the burning car at Bellarena last night.

The Derry to Belfast railway line has reopened this morning after a burning car was placed on the track.

The car was set on fire on the track at Bellarena last night around 9pm.

A train travelling from Belfast to Derry was forced to make an emergency stop.

Translink said there were six passengers on the train.

Firefighters from Limavady put out the blaze.

There was some damage to the track but Translink said the railway line between Derry and Belfast has reopened this morning.

A spokesperson for the transport company said the 6.42am service from Derry operated as a normal train service.

The Translink spokesperson said the 7.38am will operate as a bus substitute service to Coleraine.

Infrastructure Minister Nichola Mallon expressed her gratitude to the train driver who brought the train to a halt before it reached the burning wreck.

“I am so relieved to hear that passengers and crew are all safe. It is unimaginable to think what could have happened this evening had it not been for the prompt action of the driver and crew.

“I want to express my gratitude to them and to the emergency services.

“I would urge anyone with any information about this incident to contact the PSNI.”

"Our investigation is currently underway to establish the circumstances into this incident. We are appealing for any witnesses to contact police on quoting serial number 1945 of the 12/04/21," he added.

You can also submit a report line using the non-emergency reporting form via http://www.psni.police.uk/ makeareport/ or call Crimestoppers anonymously on 0800 555 111 or via online at http://crimestoppers-uk.org/.