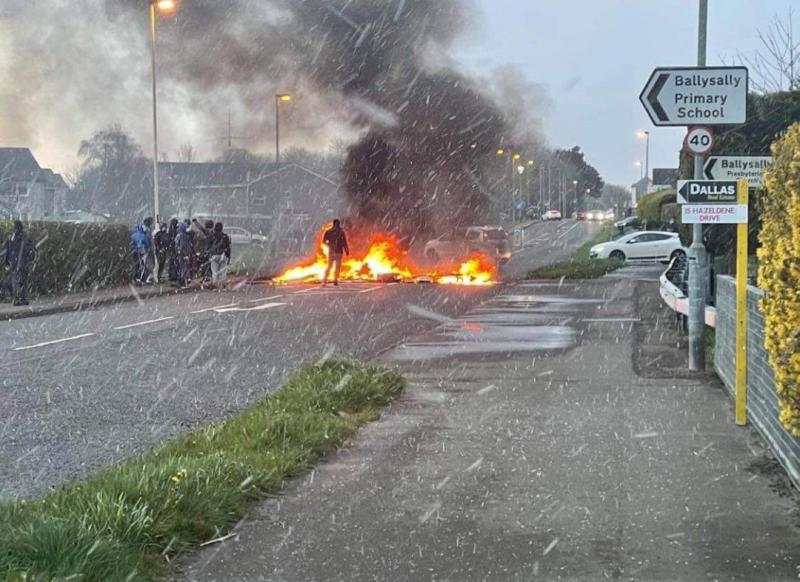 Police have appealed to parents and guardians to ensure there is no repeat to scenes of disorder in Coleraine on Friday night.

The disorder started at around 7:45pm in the Atlantic Road area of the town where a crowd of approximately 40 people, many of whom were masked and mostly of teenage age, had gathered and attempted to block the road by setting fire to pallets.

Masonry and other missiles were also thrown at officers causing damage to some police vehicles.

At around 10:45pm, officers had dispersed the crowd and restored order to the area.

North Area Commander, Chief Superintendent Davy Beck said: "The senseless disorder we saw unfold in a residential area in Coleraine has achieved nothing but leave people petrified in their homes.

"Such reckless criminal activity has only served to harm the local community by those who deliberately chose to engage in such disorder.

"Thankfully, none of our officers were injured as a result of the attacks, however, some of our vehicles did sustain damage, and that damage is currently being assessed.

“I want to make a direct appeal to parents, guardians and community leaders to use their influence to ensure we do not see a repeat of such ugly scenes.

"This is not wanted by anyone and does not represent the local community who we know just want to live in peace.

“I want to reassure the community that we will continue to work to keep people safe and those who engaged in last night’s disorder should be warned that an investigation is underway and evidence gathered will now be reviewed and those identified will face the full rigour of the law.”