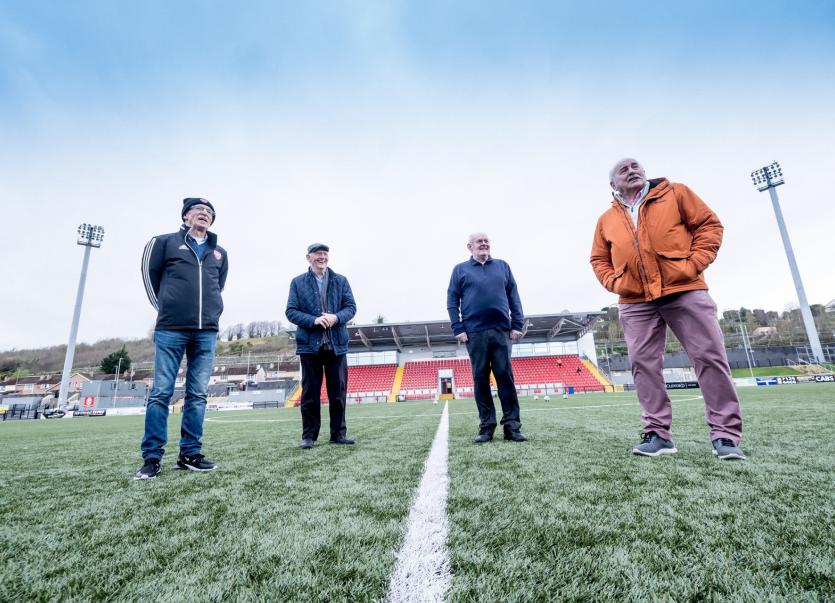 The 'Gang of Four' who brought senior football back to the Brandywell in 1985.

A documentary telling the story of Derry City's rebirth in the 1980s will be shown on the BBC later this month.

Bombscares, Benfica and the Brandywell Stadium.

This is the story of a community that needed to catch a break and how its football club, exiled from the league for more than a decade, was brought back from the dead.

The Brandywell was one of the poorest areas in Europe and home to Derry City Football Club.

In the shadow of the civil rights movement and the Troubles, the club managed to keep playing.

Until one day when the team bus of Ballymena United was caught up in the violence, taken away and burned. The ramifications would eventually see Derry City FC banned from playing at home and put out of business.

A new co-commission from BBC Northern Ireland and BBC Two, Different League: The Derry City Story, charts the extraordinary journey of one community as they found a haven away from the violence and a taste of success like never before.

Sometimes football can change the world.

In 1984, when times were bleak, the city needed a saviour.

Tony O’Doherty was a Northern Ireland international who had played against England at Wembley.

He teamed up with another international, Terry Harkin, and two other professionals Eddie Mahon and Eamonn McLaughlin, to become the ‘Gang of Four’ who challenged the status quo. They made it their goal to get senior football back in their hometown.

An incidental chat in a city centre shoe shop, managed by Terry, over some lunchtime sandwiches would change everything.

With repeated rebuffs from the Irish League in Belfast to their requests to gain re-entry, the four lads decided to take their footballing revolution south – to the League of Ireland in Dublin.

They had no premises and no money. But they did have the phone number for a manager called Jim McLaughlin.

Brought up in the Brandywell, Jim brought his team Shamrock Rovers to the Brandywell to play a makeshift team of amateurs rounded up to play as Derry FC.

The crowds flocked to the ground and the Gang were able to show that there was an appetite for football in Derry. It was time to cross the border and bring their big idea to the salubrious surroundings of the Burlington Hotel in Dublin.

The triumph-over-the-odds film, directed by local director Guy King and made for the BBC by State Of Grace Films and Stray Bear Films, follows the emotional story of how in September 1985, after 13 years in the wilderness, football was back at the Brandywell.

The club would go on to lift silverware and lift the spirits of the city, unleashing a carnival of hope, pride and optimism.

Featuring in-depth interviews with the Gang of Four, never-before-seen archive footage and the memories of the faithful supporters, the film portrays an inspirational bunch of people who made their dreams come true.

The rollercoaster took their club and community from the depths of despair to footballing nirvana, landing an historic domestic treble in the League of Ireland.

It would culminate with the arrival of football royalty with Sven-Goran Eriksson bringing his Benfica team of superstars into the heart of the Bogside for a European Cup tie.

Different League: The Derry City Story will be broadcast on BBC One Northern Ireland on Monday, April 19 at 9pm.