Two former members of staff have spoken out after a copy of the policy was shared online last week.

A County Derry convenience store chain has been criticised after a copy of a store policy penalising shop staff in the event of 'drive-off' thefts from their forecourts was shared online.

Former employees of Kenny's Convenience Stores, who have stores in Garvagh, Kilrea, Magherafelt and Coleraine, have told the County Derry Post the policy has been in place as far back as 2012.

Photos from inside the company also revealed staff lists detailing how much each employee 'owes' as part of the policy are posted in communal staff areas each week. 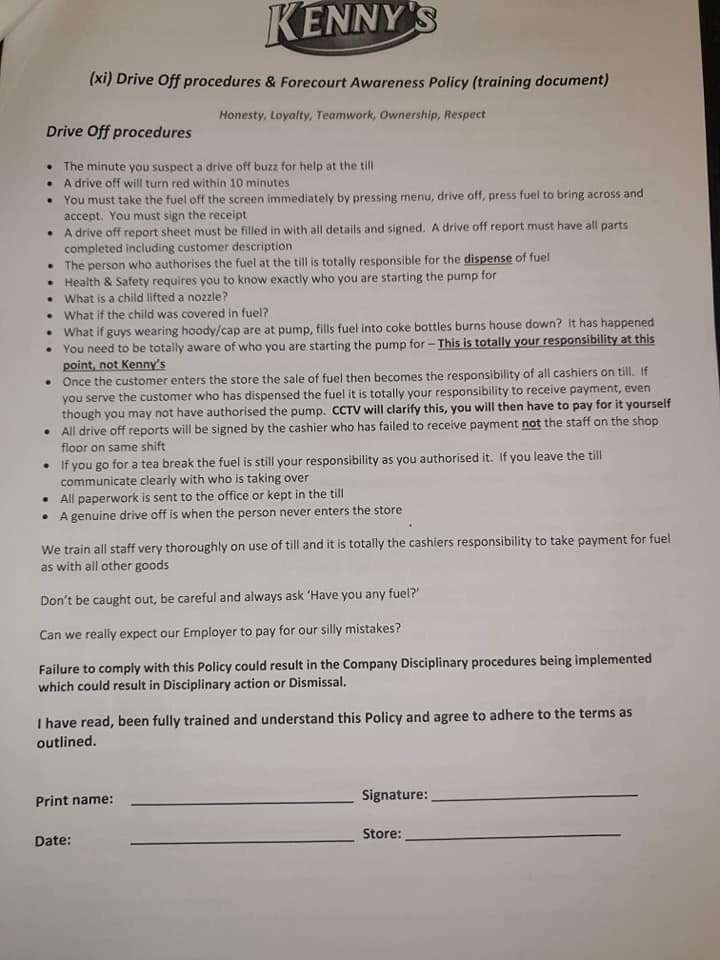 The policy which was leaked on social media last week.

Kathy Stewart, who worked for Kenny's in 2018, claimed the company were using a loophole to get around using legal process to pursue drive-off offenders.

“It happened me a couple of times when I was in there,” she said.

“A few times there were drive-offs all around us and they said it was your till, you're responsible for it. They rarely would have bothered looking at CCTV.

“They would put it under till shortages, and not as a drive-off. If you don't put it in as a drive-off, the police are not contacted.

“It would cost more money to do it that way than it would to make us pay it. They make you feel really guilty. Mine was up to £100 at one point and there are other girls there that were a lot more.”

The policy circulated online lists a number of instructions for staff on what to do in the event of a drive-off, and states a 'genuine drive-off is when the person never enters the store'.

“Once the customer enters the store, the sale of fuel then becomes the responsibility of all cashiers on till,” it reads.

“If you serve the customer who has dispensed the fuel, it is totally your responsibility to receive payment, even though you may not have authorised the pump.

“CCTV will clarify this, you will then have to pay for it yourself. If you go for a tea break, the fuel is still your responsibility as you authorised it.

“We train all staff very thoroughly on use of till and it is totally the cashier's responsibility to take payment for fuel as with all other goods.

“Can we really expect our Employer to pay for our silly mistakes?” it concludes.

Kathy Brennan says the policy places undue pressure on the staff who are operating the tills, trying to keep an eye on the forecourt while also serving customers in store.

“When you release the pump you're meant to write down the reg number of the car, while serving other customers, where you're not allowed to have a queue,” she said.

“They want you paying it every week, but some people can't afford that, because you are on minimum wage. It's not ethical at all.

“They make you feel that you're the bad person while you're trying to do your job.” 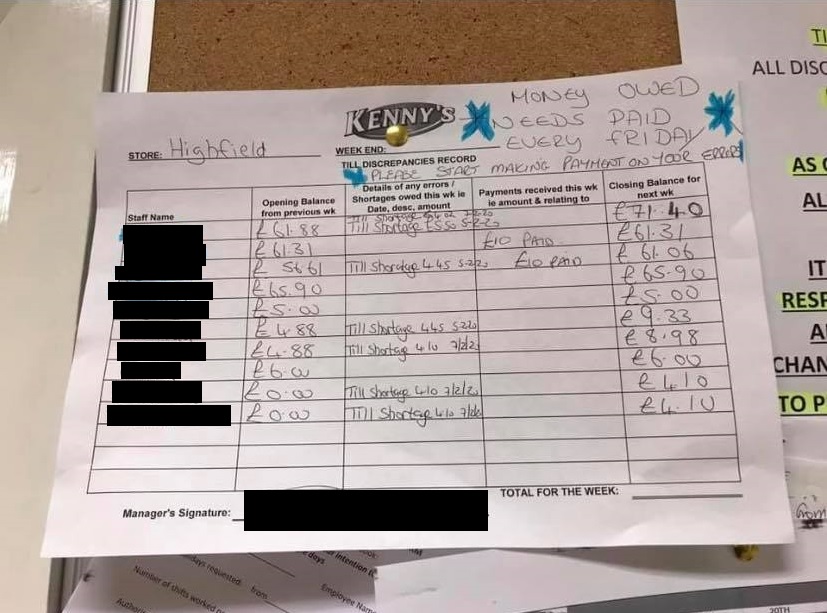 A record of money 'owed' by staff pinned to the wall of a Kenny's store in Magherafelt.

In some cases, staff have had to personally track down drivers who may have forgotten to pay in a bid to avoid being held responsible for the lost revenue.

“There are quite a few people who realise when they've got home that they haven't paid for their fuel,” said Kathy.

“Someone might recognise the car or the reg and contacted them, maybe through Facebook or someone who knows them and eventually they come back in and pay it.

“It is staff members who have had to do that, not management.”

Danny Rogers started working at the company's Garvagh store in 2014, and said he was dismissed from his job after refusing to pay his 'wall of shame' balance.

“I was out of work for six months because of it. I would have stayed had the policy not been there,” he said.

“The company was adamant I had to pay it. It was all written up on the board. There was piece of paper with people's names on it and the total amount you had to pay beside it.

“Mine got up to about £150 or something like that and the company said 'you need to pay this off', and I said I couldn't afford to pay it.

The effect of the policy left Danny reluctant to even take a break while he was working, as staff were held responsible even when they were not on the tills.

“Even if you weren't on the till at the time, you were still liable to pay the amount.

“It was coming to a point where I was so worried about it, that I rarely took a tea break, because I thought if I miss something here, I'm going to get stung for it.

“As far as they were concerned, if money was going missing, it was basically up to the staff to pay it, but if your till was up, they'd quite happily take that.

“Then if it was down a couple of days later, they'd say you needed to make it up, so basically they are getting paid twice.

The County Derry Post contacted Kenny's in relation to the former staff's claims.

A spokesperson for the company said an 'internal investigation' has been launched in response to the claims.

“As a company that employs over 130 people in 6 stores throughout Northern Ireland, we have robust employment practices in place to support and protect all our staff and we take any complaint very seriously.

“Once we became aware of this issue, we commenced an internal investigation and are progressing this as a matter of urgency.”

A spokesperson for the Union of Shop, Distributive and Allied Workers (USDAW) has urged workers to defend themselves against unfair working practices.

“In general, employers can only make deductions for till shortages if it is specifically written into the employee’s contract and the amount they can recover is capped at 10% of gross wages,” they said.

“USDAW is opposed to till shortages being taken from wages and it does not happen in the major retail companies where we are recognised.

“We urge shopworkers to join USDAW to help protect themselves from unfair working practices.”