Magherafelt woman gets award for all her efforts

Linda was the local hub leader for NI Scrubs during the first Covid-19 lockdown. 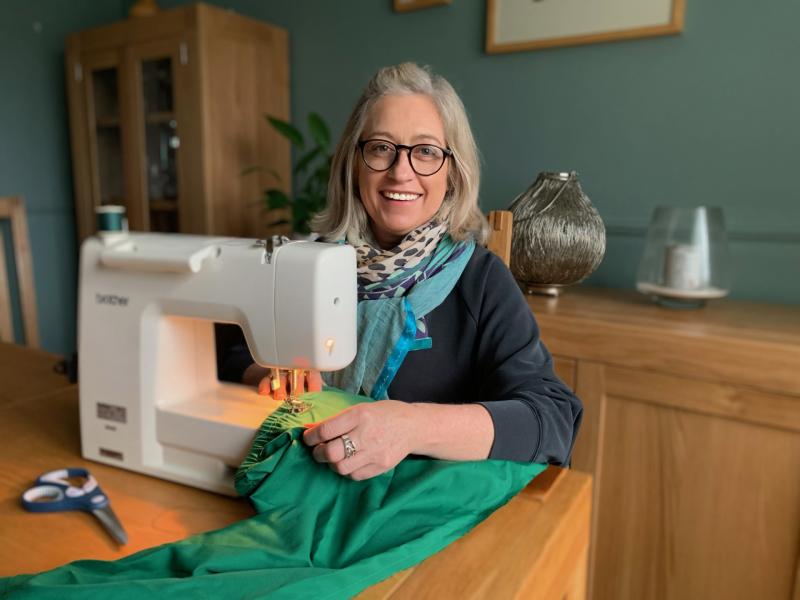 A County Derry woman has been honourerd for her efforts in helping people during the pandemic.

Linda Murray from Magherafelt has been recognised for her role as a local hub leader for NI Scrubs, coordinating more than 30 people who came together to produce more than 400 sets of scrubs and bags, crocheted ear-protectors and over 1,000 facemasks.

The mum-of-two and freelance designer was nominated for a Specsavers Smile Maker award by her cousin, Castledawson woman Michelle Clarke.

Michelle says: ‘Linda worked tirelessly at the start of the pandemic, bringing people together to create PPE and scrubs for nearby hospitals and nursing homes.

“It was a huge undertaking especially when no shops were open to purchase materials.

“With the help of social media and word of mouth my cousin located fabric, elastic, buttons, thread and cutting patterns and organized cutters and seamstresses and went on to fulfil often large orders of PPE and scrubs to help protect patients and staff in our NHS and nursing homes.”

Linda said she was humbled to receive the recognition.

“My mum had left me her prized sewing machine and when I saw the call-out from NI Scrubs on social media I thought it’s time to put the machine to good use,” she said.

“Then I ended up moving into a management role organising professionally printed patterns through local company DJ Print and recruiting volunteer sewers in the Mid-Ulster area through social media.”

In addition to the award, Linda won a one-to-one video call with celebrity father and son, TV and radio stars and ITV Sunday Best presenters Martin and Roman Kemp, as well as £1,000 and a glasses voucher to spend in Specsavers, Magherafelt.

“Martin and Roman were very friendly and natural and when I told them I’d been inspired by my mum and her well-loved sewing machine, we had a wonderful chat about sewing.

“Martin recalled his mum being an avid sewer creating fabulous dolls clothes and their house being full of sewing. It was really lovely to have something like that in common.

“They also asked me what was my most vivid memory of these pandemic times and I explained it was the coming together of all our neighbours in Hazelbrook for a socially distanced celebration and fundraising event during the warm early summer weather last year.

“There are 27 houses in Hazelbrook and so many people had been part of our scrubs sewing team.

“We decided to have a socially distanced street party to mark our achievements and raise cash for Hope Food Bank in Magherafelt.

“It was a really sunny day and everyone enjoyed a BBQ with food supplied by local retailers JC Stewarts and McAtamney’s.

“One of my neighbours sings in a group called Jackson Rox and they entertained us.

“Everyone had tremendous craic while raising cash for our local foodbank.  It really was a day to treasure.”

Linda added: ‘Being involved with NI Scrubs was a very rewarding experience and a special shout-out goes to many others - from NI Scrubs instigator Clara Maybin to my ‘regional manager’ Kasia Rogowiec. It really was a huge team effort.

Brian O’Kane, optometry director at Specsavers Magherafelt, said the Specsavers Smile Maker competition has done a wonderful job of shining a light on those people who have continued to make us smile.

“I’d like to congratulate Linda for all her volunteer work in the Mid-Ulster area – she really has made a difference to people’s lives,” he said.