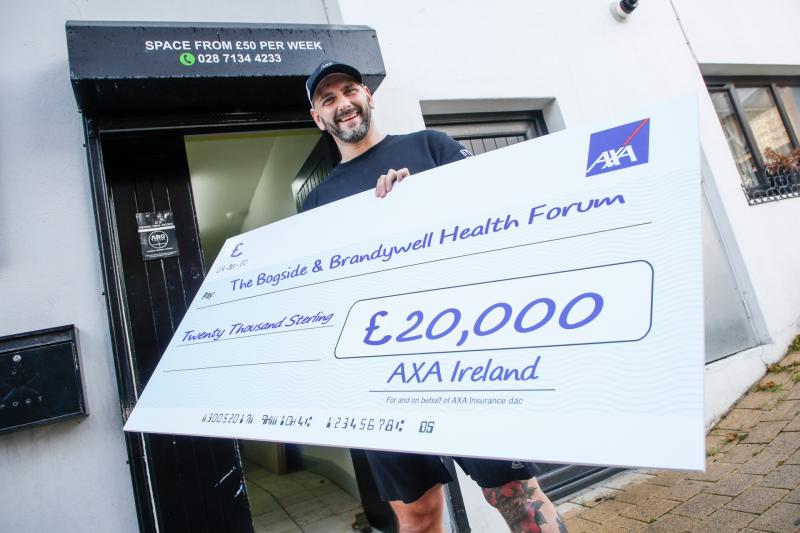 Gary Rutherford has donated his £20,000 award to the Bogside and Brandywell Health Forum.

A Derry man has received a major award for the work he has done helping others during the pandemic.

Gary Rutherford from Derry has been named as one of only five winners of the AXA Community Hero awards 2020.

Gary was announced as one of the winners by Ryan Tubridy on tonight’s Late Late Show on RTE.

He was selected for his extraordinary work in setting up Addiction Recovery Coaching (ARC), a non-profit organisation that uses exercise and community to help people struggling with addiction to get and stay sober.

Using his own professional experience in mental health nursing and personal training, Gary runs the organisation in his free time.

ARC already has 20 active members who have gone through a special programme to help people struggling with addiction and who have remained involved to support other people now going through the programme.

Each of the five winners in this national awards scheme has nominated a charity which will receive £20,000 from AXA.

Gary has selected The Bogside & Brandywell Health Forum for the work they do in health and wellness in the community.

AXA will also present Gary with a personal award of £5,000 to mark his achievement.

Originally it was only intended to select one winner in this national competition but in response to over 1,000 nominations which poured in during the summer, AXA increased the number of winners to 5 and increased the total prize fund from £25,000 to £125,000.

The AXA Community Hero awards was set up to recognize individuals who supported their friends, colleagues and neighbours during recent difficult months.

The competition was open to residents of the Republic of Ireland and Northern Ireland and all nominees had to be aged 18 years or over at the date of entry.

Gary was the only award winner from Northern Ireland.

Antoinette McDonald, Director at AXA, said; “Gary is an inspiring figure who has overcome his own struggles with addiction and put that experience to great use by supporting others who are struggling with the same problem.

“By establishing ARC Gary is making a profound difference in the lives of many people and we are delighted to honor him with this award and to support this great charity.”