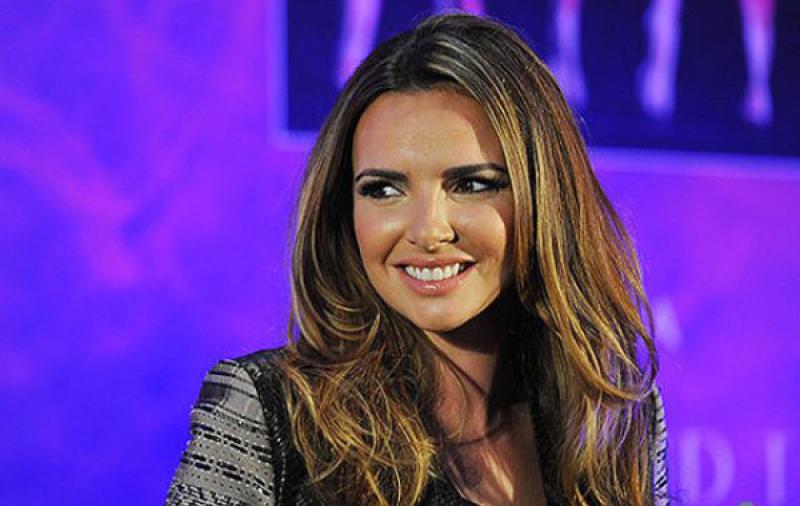 Surnames, or inherited family names, are the building blocks of genealogy; without them, it would be impossible to trace our ancestors back through the generations.

Although only detailed family history research will confirm the actual Irish origins of your ancestors, surname histories can provide clues and insight into family origins.

Each of these surnames bears a distinctive history and taken as a whole they are a record of population movements into the Derry area over the past 400 years.

Derry’s dynamic history can be seen in the richness and variety of her surnames.

The three commonest names have Donegal origins with Doherty heading the way with 469 entries, followed by McLaughlin on 276 and Gallagher with 170 entries. By way of contrast, 808 surnames occur only once. 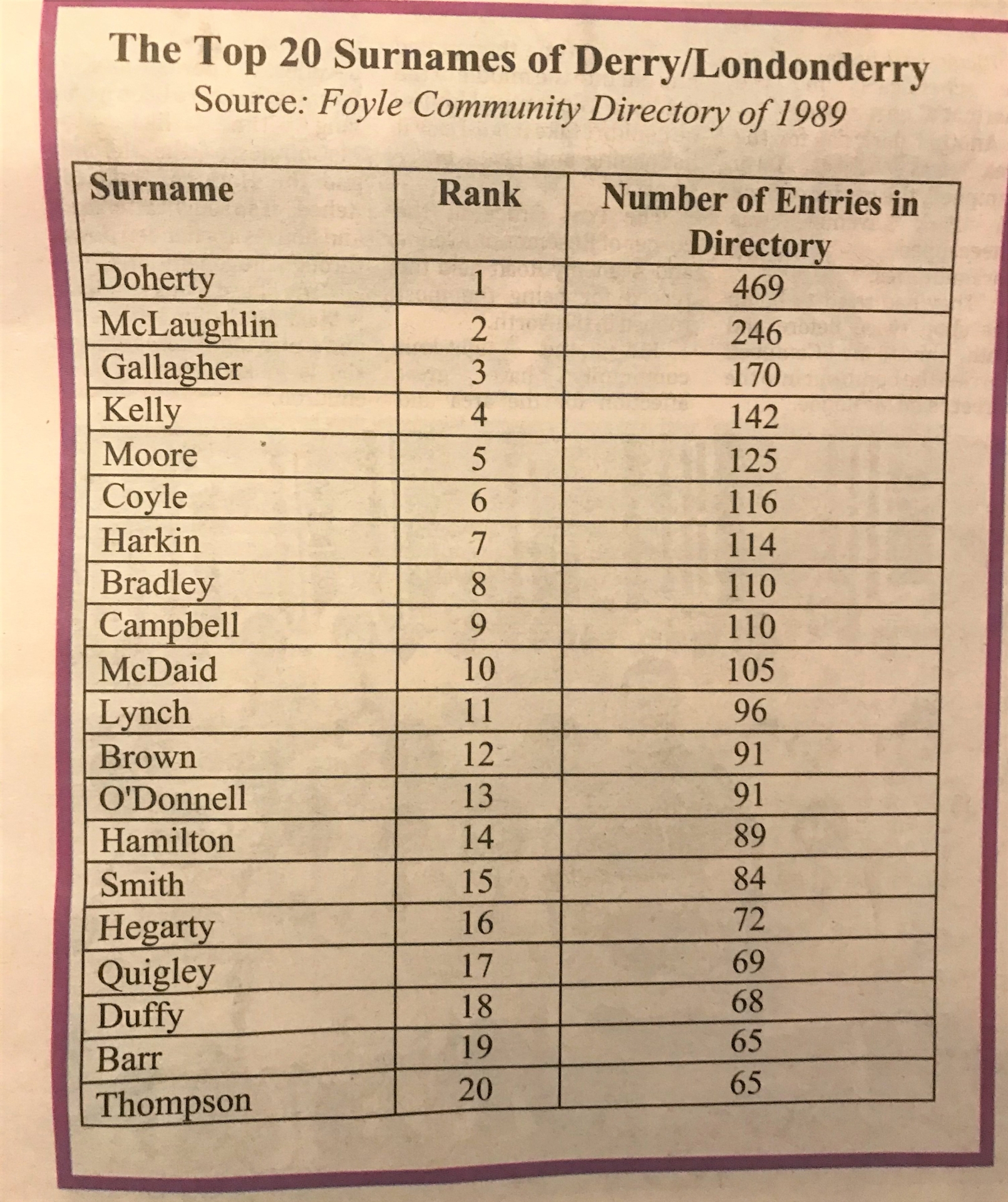 Ireland was one of the first countries to adopt a system of hereditary surnames which developed from a more ancient system of clan and sept names.

From the 11th century each family began to adopt its own distinctive family name generally derived from the first name of an ancestor who lived in or about the 10th century.

The surname was formed by prefixing either ‘Mac’ (Son of) or ‘O’ (Grandson or descendant of) to the ancestor’s name.

Surnames in Ireland, therefore, tended to identify membership of a ‘sept’.

A sept can be identified as ‘a group of persons who, or whose immediate and known ancestors, bore a common surname and inhabited the same locality’.

As a consequence, Gaelic-Irish surnames are still very dominant and numerous in the very districts where their names originated.

By tradition, many of the prominent surnames of Gaelic origin in Counties Derry, Donegal and Tyrone today trace their descent from either Eoghan or Conal Gulban, two of the sons of Niall of the Nine Hostages, King of Tara who was slain in 405 AD.

By tradition, Eoghan and Conall Gulban conquered northwest Ireland about 425 AD, and in the process captured the great hill-top fortification of Grianán of Aileach in Inishowen, County Donegal which overlooks the city of Derry and the surrounding countryside.

Although Gaelic society was one of the first to adopt a system of hereditary surnames it was also one of the last to perpetuate fixed surnames.

People in these societies, in the early 18th century, were often designated by their genealogies stretching back five or more generations.

Here is family history in one name stretching back over 200 years.

The Genealogical Office manuscript collections in Office of the Chief Herald at National Library of Ireland, Dublin are the most important source for the genealogies of Gaelic families and of those families entitled to bear arms either by hereditary right or by grant.

The inauguration ceremony took place on the original ‘crowning stone’, known today as ‘St Columb’s Stone’, inside the walled garden in the grounds of the former Belmont House School, Racecourse Road, Derry, using the ancient ceremonial ritual of the clan: the claimant to the title of ‘The O’Doherty’ standing barefoot on the stone, holding a white wand of hazel wood.

By tradition, the crowning stone, blessed by Saint Columba, was carried to Belmont from Grianan of Aileach.

By tradition, Grianan is identified as being the great “royal fort” of Aileach, the citadel of the northern Ui Neill from the 5th to the 12th century.

With the Genealogical Office manuscript collections a family chart can be constructed which, on the male line, records the ancestors of Ramon O’Dogherty, “Chief of the Name”, back through 46 generations to Niall of the Nine Hostages, 5th century High King of Ireland

Ramon O’Dogherty is descended from Sean, brother of Sir Cahir O’Doherty (d. 1608), who fled from Inishowen to County Cavan and whose descendants settled in Spain, as nobility, in the 18th century.

Entry required them to show their genealogy, proving noble origin. In 1790 the King of Arms in Dublin Castle confirmed the three brothers as being “descended in a direct line from Shane or Sir John O’Dogherty, Chief of Innish-Owen”.

In the 17th century substantial numbers of English and Scottish families settled in the northern part of Ireland during the so-called Plantation of Ulster.

These settlers came to Ulster, by and large, in three waves: with the granting of the initial leases in the period 1605 to 1625; after 1652 and Cromwell’s crushing of the Irish rebellion; and, finally, in the fifteen years after 1690 and the Glorious Revolution.

Famine in Scotland (which reduced Scotland’s population by 10-15%) from 1695-1700, together with landlords in Ulster actively seeking new tenants, resulted in a massive influx of Scottish settlers to Ulster in the 1690s.

Substantial numbers of Scottish families entered Ulster through Derry and settled in the Foyle Valley which includes much of the fertile lands of Counties Donegal, Londonderry and Tyrone.

The lands along the Firth of Clyde in Ayrshire; the Clyde Valley; Wigtown, Kirkcudbright and Dumfries in Galloway; and the Border Lands of Berwick, Peebles, Selkirk and Roxburgh were home to many of these Scottish settlers.

More recent arrivals from outside the British Isles have also contributed a small but interesting collection of surnames in the Derry area.

An Italian community with surnames such as Battisti, Caffola, Cassoni, Centra, Corrieri, Del Pinto, Fiorentini, Forte, Macari, Vaccaro and Yannarelli settled in Derry in the 1920s.

A Jewish community with names such as Schenkel, Szilagyi, Spain and Watchman settled in Derry and worshipped in a synagogue in Kennedy Place, and a thriving Indian Community, represented by surnames such as Chada, Singh, Vig and Vij, has been established in the city since the 1930s, most of whom originate from the Punjab in northern India.

The family histories associated with surname histories in Derry will, in many instances, be recorded in the database of Derry Genealogy at www.derry.rootsireland.ie.

The database of Derry Genealogy contains the bulk of pre-1922 civil birth and marriage registers for the city and county of Derry, the early baptismal and marriage registers of 97 churches (the earliest being St Columb’s Cathedral, inside the walled city of Londonderry, dating from 1642), gravestone inscriptions from 117 graveyards, and census substitutes and census returns dating from 1628 to 1930.

Starting in Monday's Derry News, we look in depth at the history of our local surnames. First up are the four most common - Doherty, McLaughlin, Gallagher and Kelly.