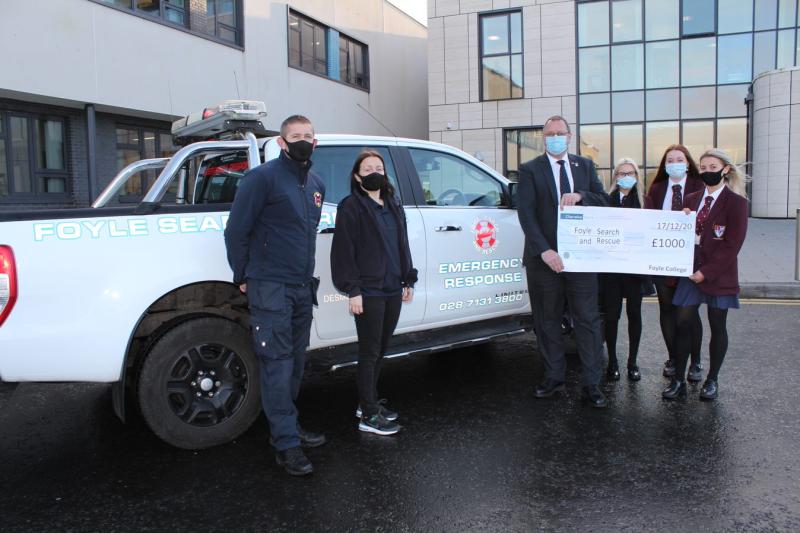 Foyle College students hand over the money to Foyle Search and Rescue.

Big-hearted pupils from a Derry school who won £1,000 in a competition have presented their winnings to a local charity.

Under the mentorship of Richard McBride and Victoria Townsend, six Year 13 pupils from Foyle College recently participated in the Livery Academy Awards.

Richard is a former pupil and current governor of the Derry school, whose back- ground is in law, whilst Victoria is the founder of the London Academy of Bespoke.

Their joint expertise and business acumen provided the pupils with the perfect marriage of guidance and knowledge.

During months of preparatory work alongside Richard and Victoria, the team developed a business plan and created a product prototype, before presenting their Care Cog to Merchant Taylors‘ judging panel, Lady Harding, Nick Hewer and Jana Mackintosh.

The team’s presentation was excellent and they coped well with the judges’ questions. However, London- based all-girls St Saviour’s and St Olave’s School were selected as winners.

The Foyle pupils were awarded £1,000 to gift to their chosen river rescue charity, Foyle Search and Rescue.

The pupils selected the local charity because, they said, it is a grassroots charity whose work makes valuable contributions within their local community.

Barry Duffy, from Foyle College, praised all those involved.

“The pupils really benefited from their participation in the Livery Academy Awards and are proud that their journey will also help to support others through the Merchant Taylors’ donation.”