Tiernan was among 101 children who received gifts. 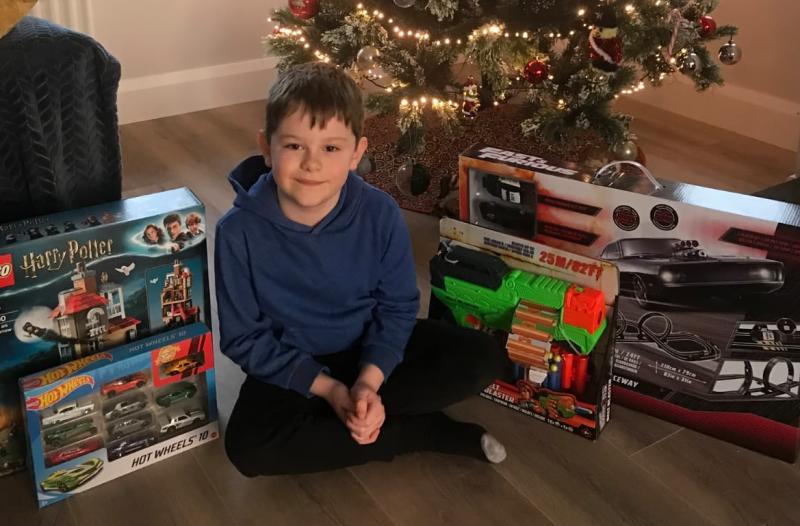 A Draperstown boy has received a special surprise in the run-up to Christmas.

The charity, Northern Ireland Children to Lapland and Days to Remember Trust (NICLT), was forced to cancel its annual flight to Lapland and instead has swapped air miles for garden visits.

The NICLT, which takes 100 local children with life-threatening or life-limiting conditions to Lapland every year, has rolled out its new COVID safe festive campaign, delivering gifts to 101 very special children across Northern Ireland.

One of those to receive gifts was six-year-old Tiernan McCullagh from Draperstown.

The NICLT was forced to cancel its yearly trip to Santa’s Grotto in Lapland in light of the pandemic and instead opted for a safer option, which saw it deliver gifts to the value of £200 to each of the children nominated by the various hospital trusts.

Siblings of those affected by illness and/or disability also received smaller gifts.

The campaign, which the charity has called ‘Three Steps to Christmas’ began with a detailed and touching letter from Santa to the 101 children nominated.

This was followed up by a video greeting, from the man himself, from his home in Lapland, with his head elf, Juju, by his side.

Now, at the final stage, these 101 children across NI have this week received gifts right to their doorsteps in time for Christmas.

The campaign was only made possible by the many supporters of NICLT, who donated funds and embarked on their own fundraising activities to raise money.

It was also made possible by NI telecoms firm, Barclay Communications, who made a magnificent donation of £20,000 last month, to pay for every gift purchased for the nominated children.

Britt Megahey, Founder and Managing Director of Barclay Communications, said, “We have always admired the work that the Northern Ireland Children to Lapland and Days to Remember Trust does and when we heard that they couldn’t fulfil their annual commitment of taking 100 vulnerable children to Lapland this year and how their efforts to raise the necessary funds had been met with many challenges, we wanted to do what we could to help.

“To see the campaign roll out across Northern Ireland is very heart-warming and we are honoured that as a business we were in a position to help those children who need it most.”