Derry and Strabane and Mid Ulster have the highest rates of all local government districts. 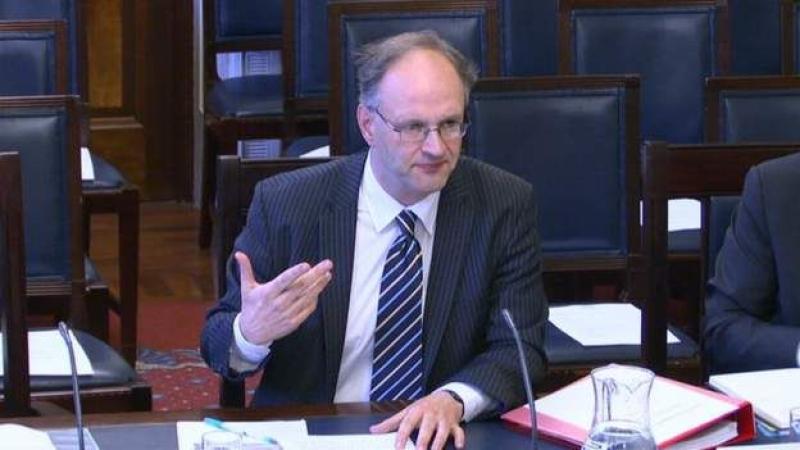 Education Minister Peter Weir has again insisted there are 'no plans' to close schools early.

County Derry's Covid rate per 100,000 of population remains well above the overall figure for NI, despite falling for the fifth consecutive week.

The county's current figure, calculated using the postcode data available on the Covid-19 dashboard, is 181.8, while the NI average currently sits at 133.1.

Positive cases of the virus within Derry fell by 12.8% to 449 over the last week compared to 515 over the previous seven days.

The BT47 postal code, covering Dungiven and the Waterside area of the city, has the highest rate in the county at 214.8, while the lowest is 120.6, found in Garvagh's BT51 postal area.

The percentage of positive tests in County Derry has also fallen from 10.% the previous week to 9.7 over the past seven days.

The county's rate feeds into the overall figures in its two local government districts, which have the two highest Covid rates in Northern Ireland.

There have been 53 Covid-related deaths across the three districts over the last fortnight; 24 in Causeway Coast and Glens; 20 in Mid Ulster and 9 in Derry City and Strabane.

Fresh restrictions that came into force on Friday are set to last until Friday, December 11, but news that three households can mix for five days between December 23-27 has been announced.

People will be able to gather in private homes and overnight stays will be permitted as well as meeting up in places of worship or a public outdoor space.

You will be able to meet people outside your bubble, provided it is done within the current regulations.

At present, six people from two households can meet in a private garden, while no more than 15 can gather in a public space.

Meanwhile, Education Minister Peter Weir has reiterated an assertion that schools have 'no plans' to close early for Christmas.

Speculation that schools are to be closed from December 11 has continued, despite previous Mr Weir's statement in mid-November.

“It is disappointing that despite my clear statement on 17 November that schools will not close early, there continues to be widespread rumours about this matter,” he said.

“I will once again stress that there are no plans to extend the Christmas holidays for schools. I believe this would only cause further disruption to children’s education and lead to an increase in levels of stress and anxiety.

“I strongly believe that face to face teaching is the best form of education and our schools are the best place to provide this in a controlled and safe environment.

“Indeed, large numbers of young people socialising out of school has the potential to create a major public health concern.

“My main priority is to guard children’s education, mental health and well-being.”

How is the rate in my local area? 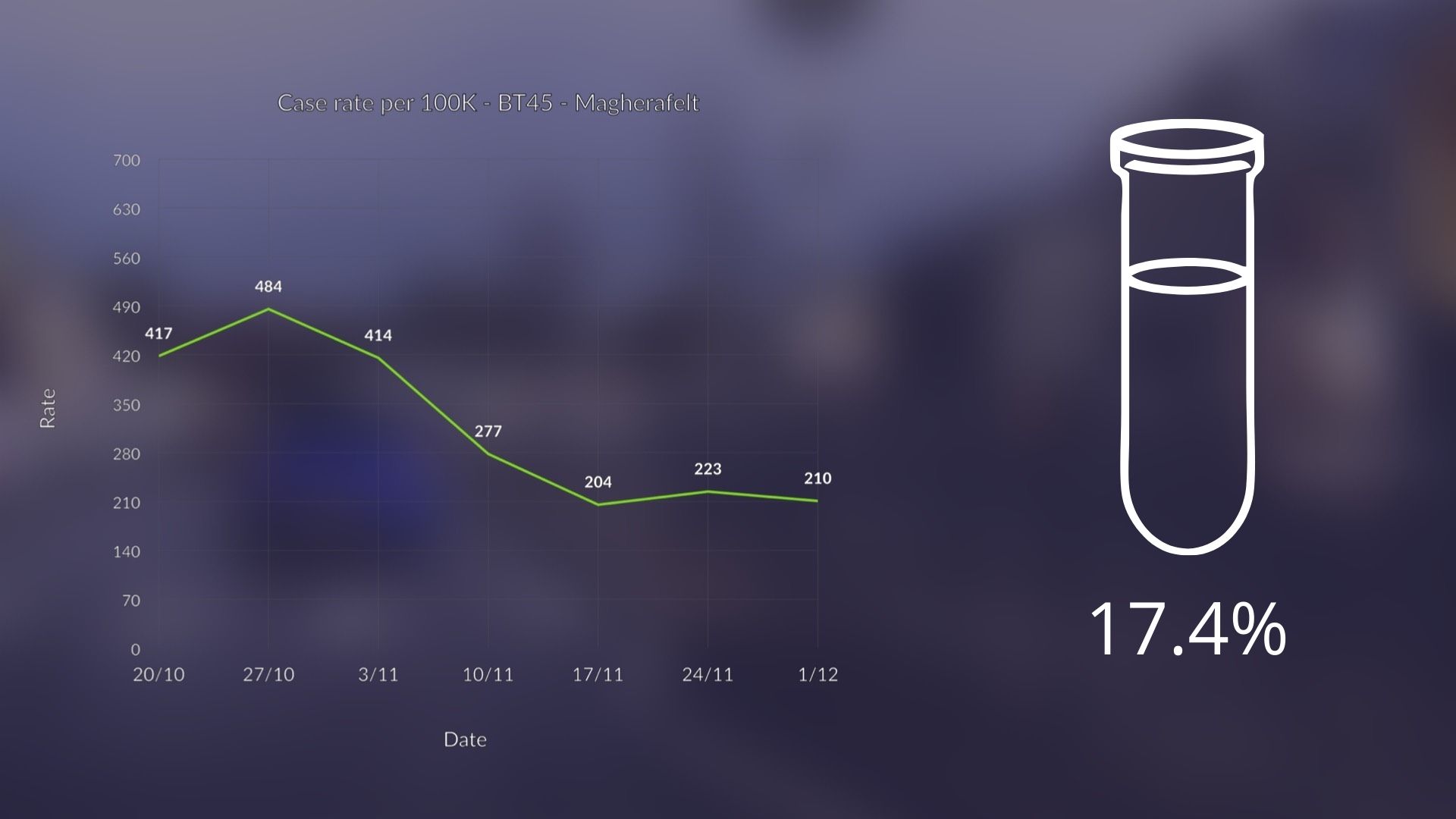 Magherafelt's 7-day rolling positive rate is the highest in the county, while its rate per 100,000 of population ranks second of all Derry's postal areas.

Like many areas, a steep decline in the first few weeks of restrictions has slowed, with the rate hovering just above the 200 mark for the last three weeks. 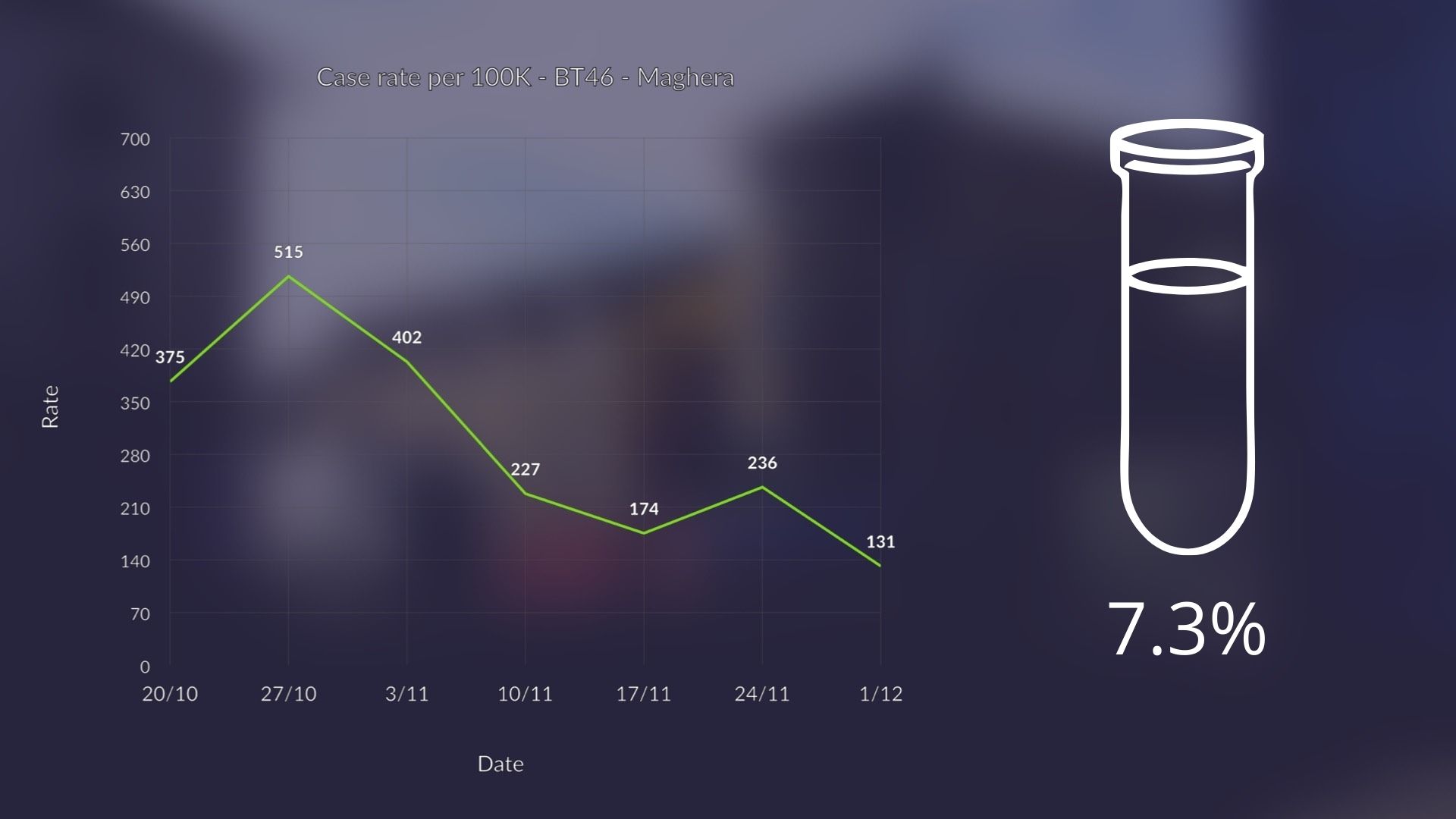 The postal area has a 7-day rolling positive rate of 7.3%. 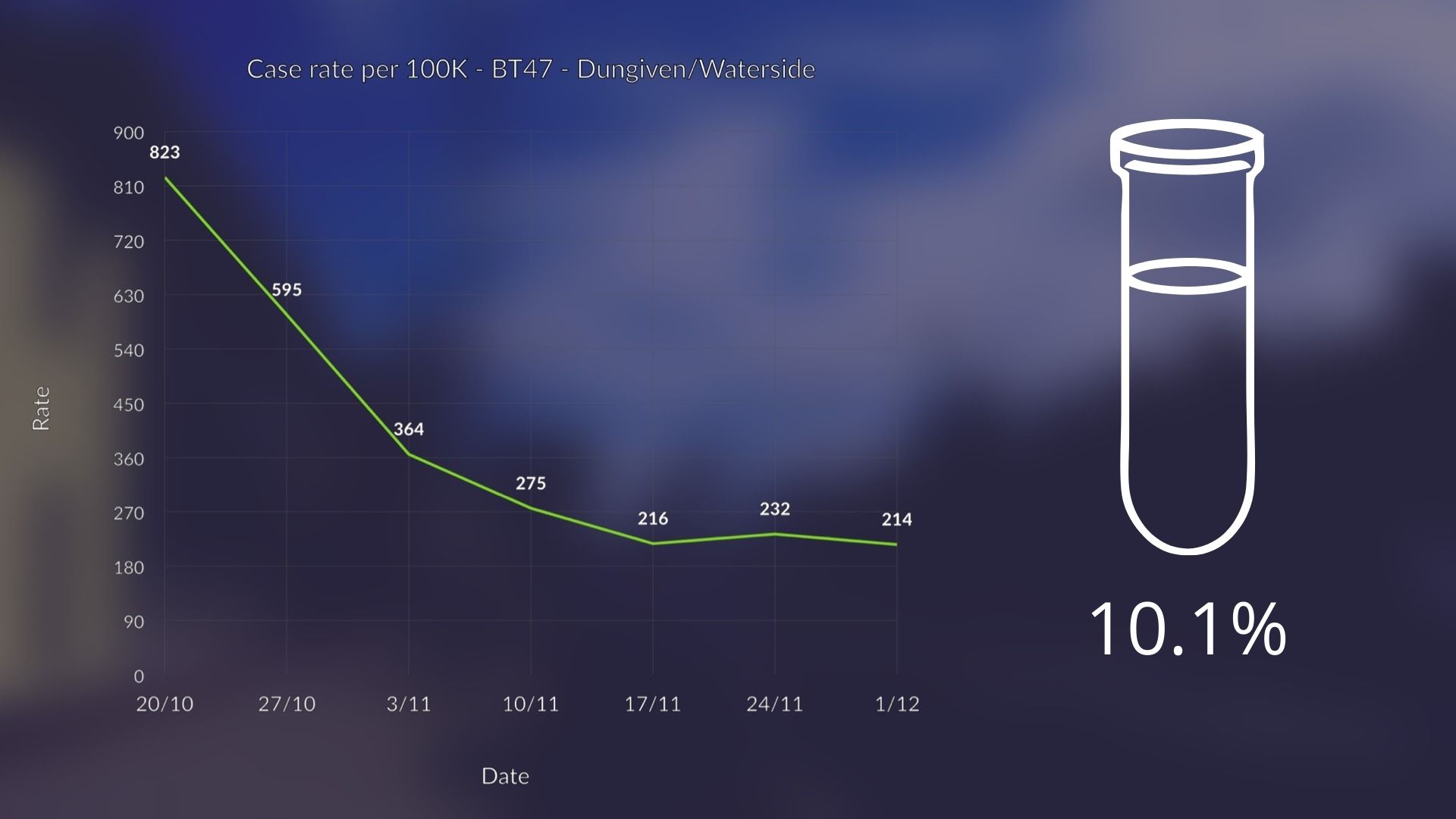 With this postal area straddling Causeway Coast and Glens and Derry and Strabane, it has the biggest population of all Derry's postal areas.

Its rate per 100,000 has levelled off just above the 200-mark after a sharp decline, helped by the early introduction of measures to slow the virus in Derry and Strabane. 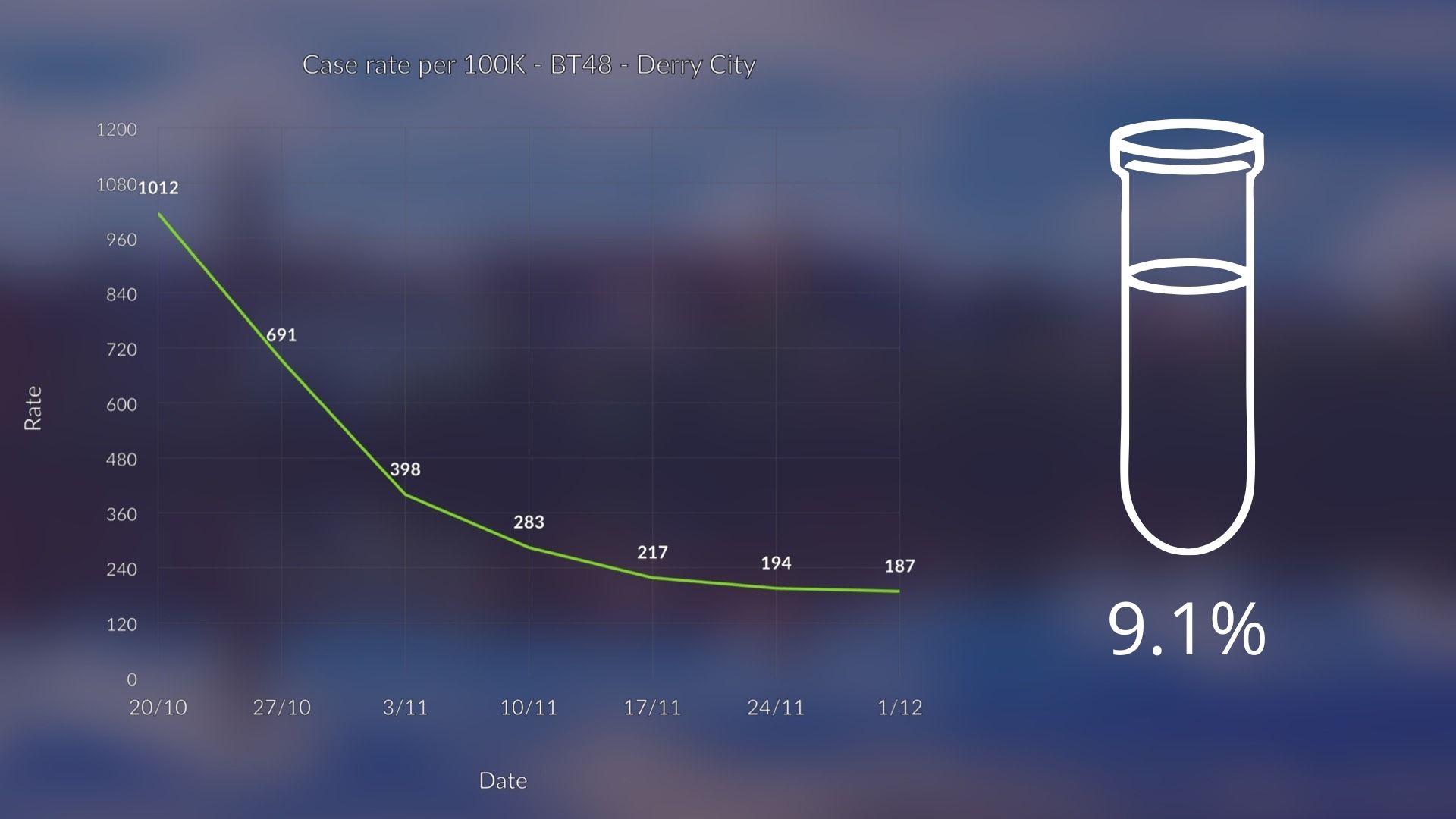 Starting from a huge figure of 1012.7 when restrictions were first introduced, the figure in Derry City continues to decrease, now falling in line with the rest of the county around the 200-mark. 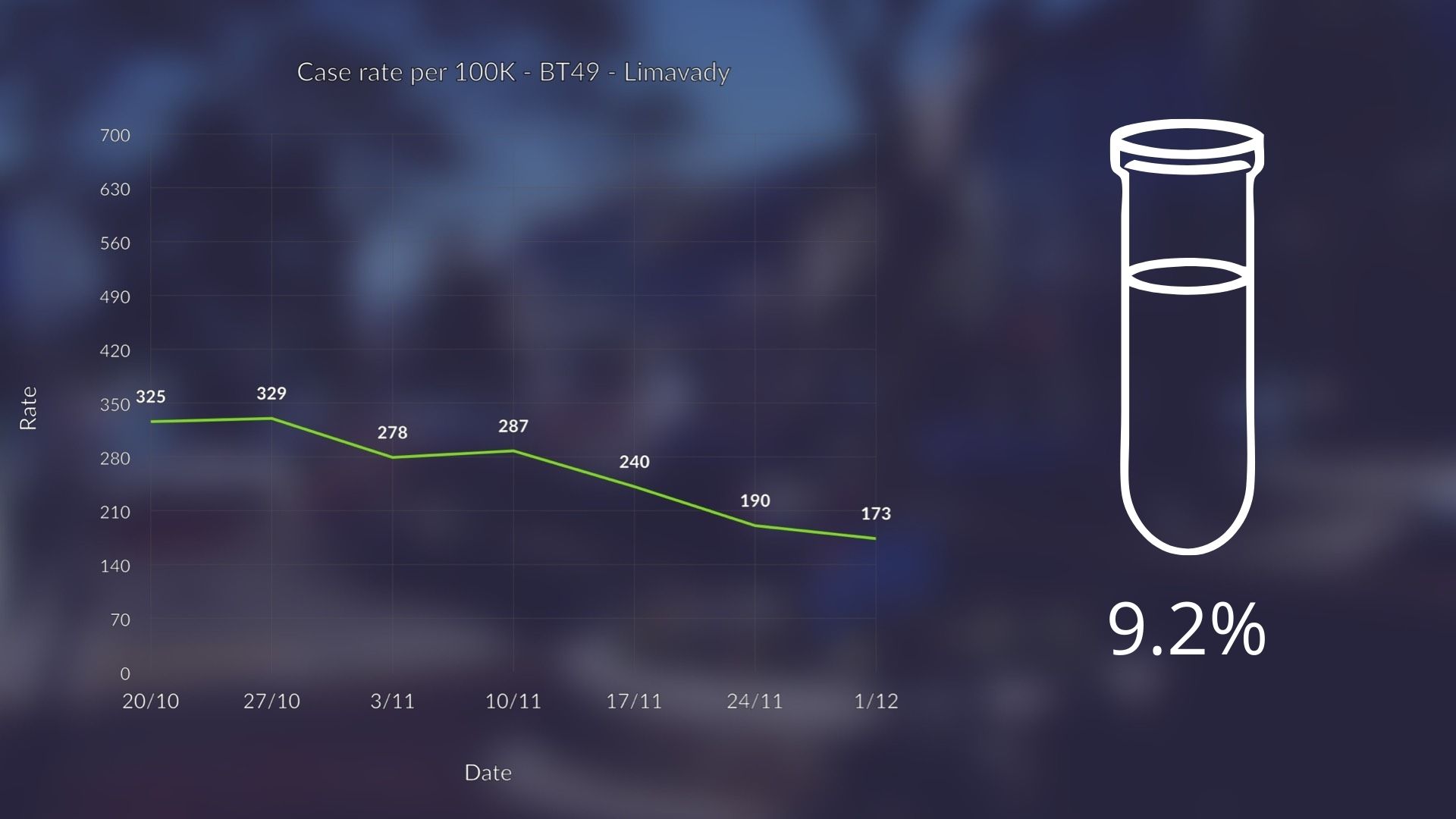 Figures in the Limavady area have bucked the trend slightly, with the rate of decline actually increasing as time moved on and restrictions took hold. 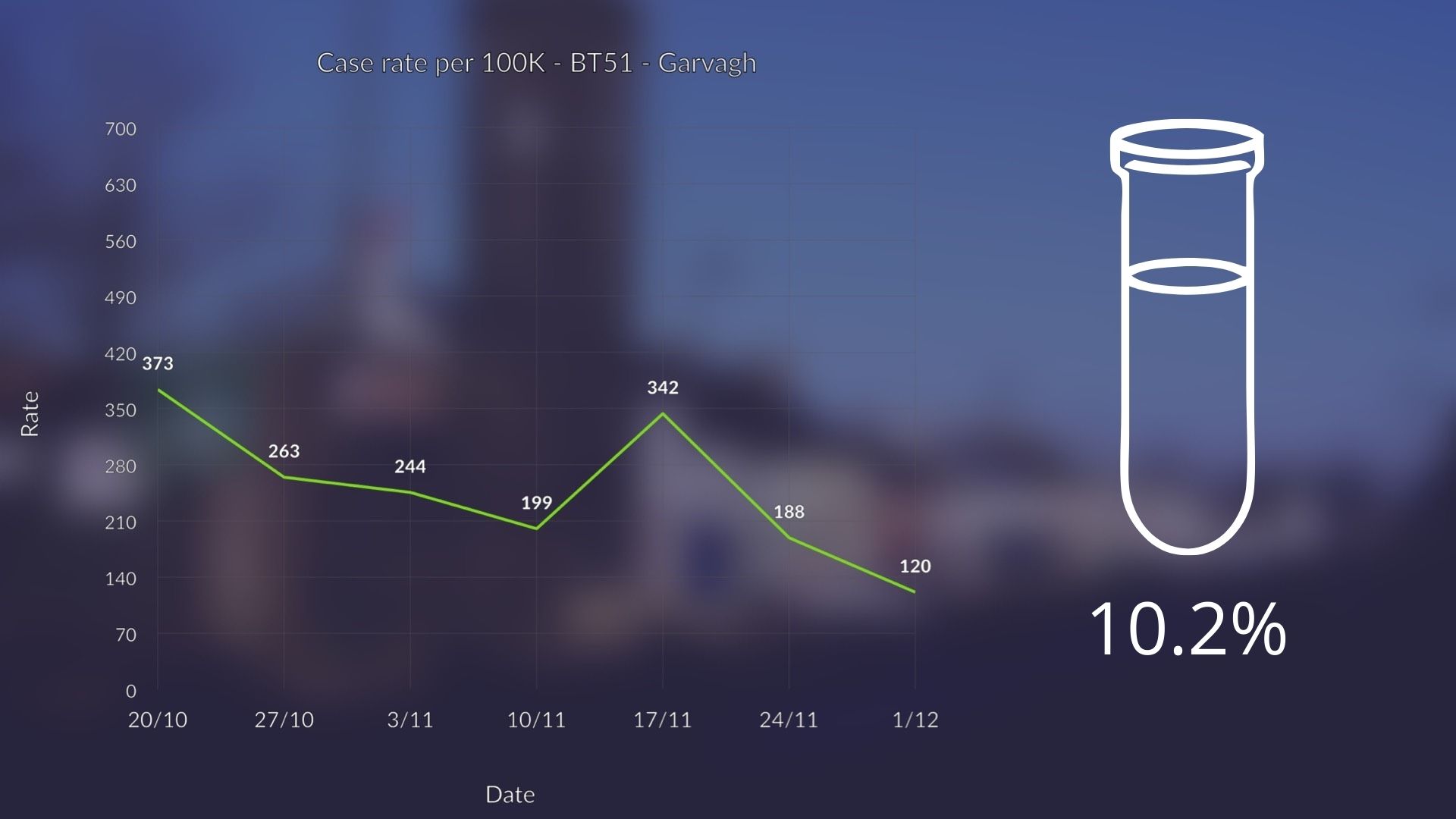 Garvagh has experienced a decline in its rate per 100,000 of population every week, with the exception of 17/11, the same week of a reported meat plant outbreak in nearby Coleraine. 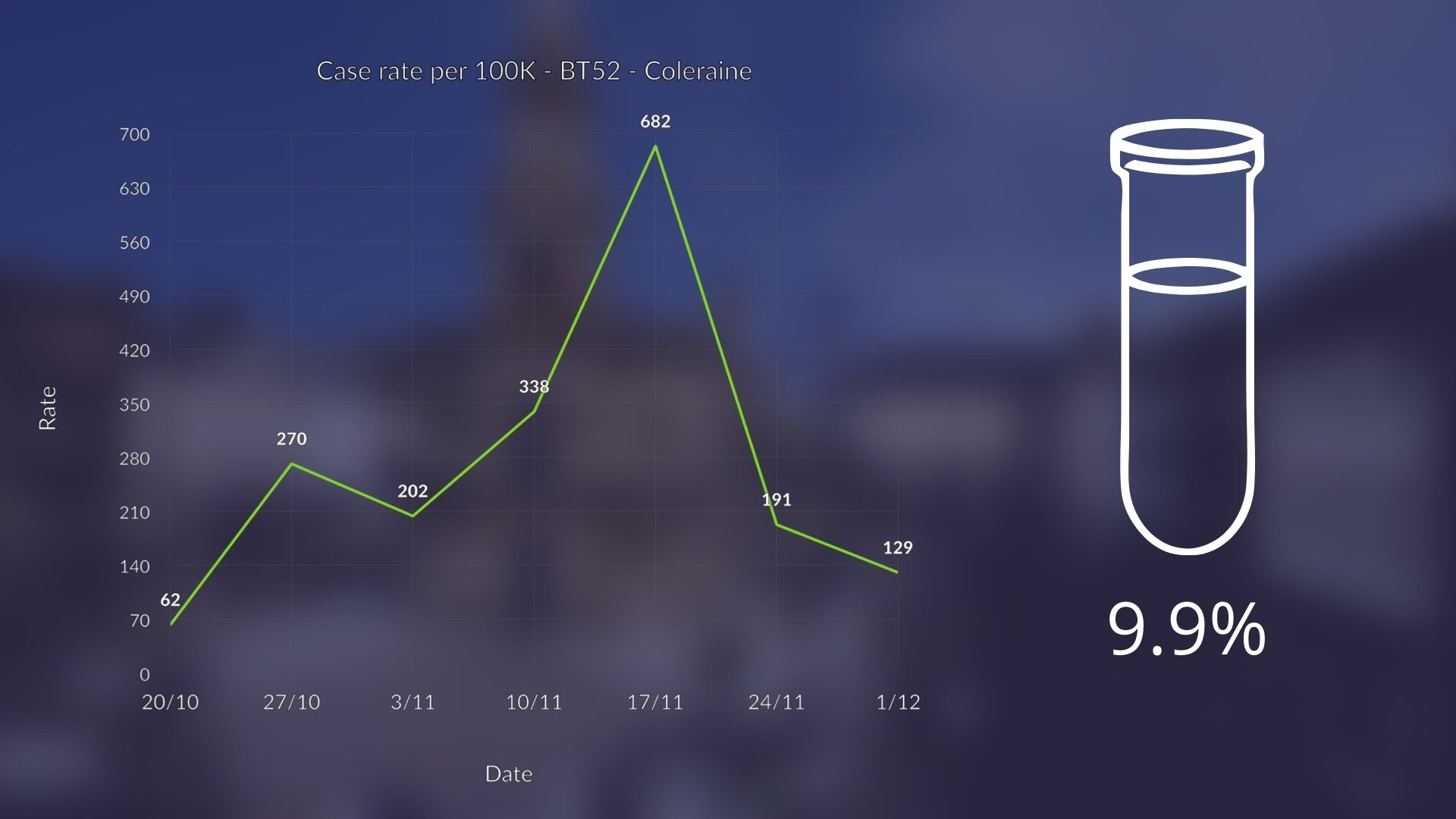 Coleraine's figures are among the most volatile in Derry. Having started at a very low base of 62 cases per 100,000 of population back in late October, the numbers shot up in November.

This has been attributed to a reported outbreak at a local meat processing plant, but in the weeks since, the figure has reduced again to sit at 129.7, below the overall NI figure of 133.1 and well below Derry's 181.8 rate. 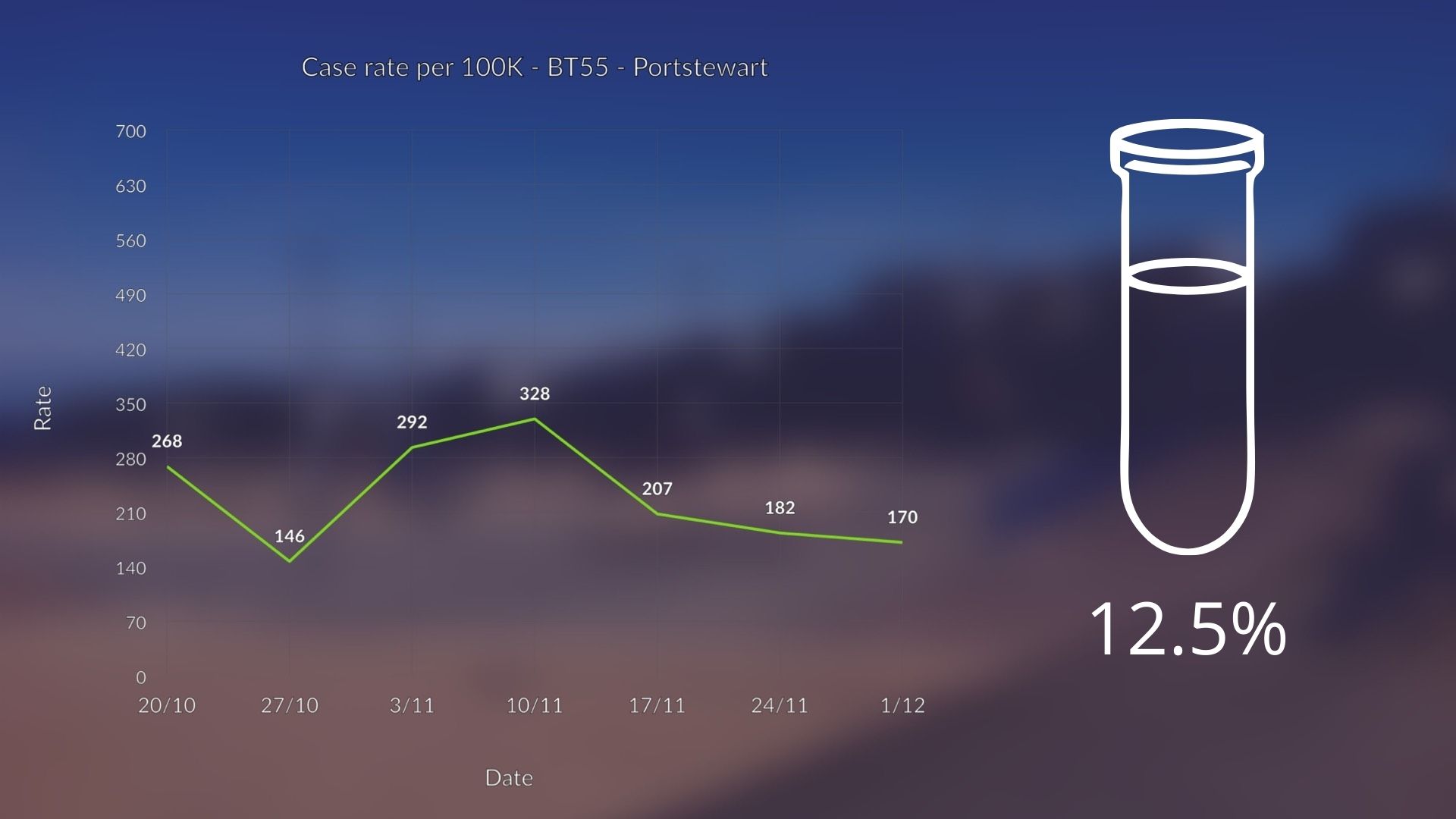 Portstewart's small population leaves its figures more vulnerable to fluctuation, but after rising for two consecutive weeks at the beginning of November, the rate per 100,000 of population has now levelled into a gradual decline.

The 12.5% 7-day positive rate is well above Derry's overall figure of 9.7%, but this may be influenced by its smaller population.

What does the picture look like in Derry overall? 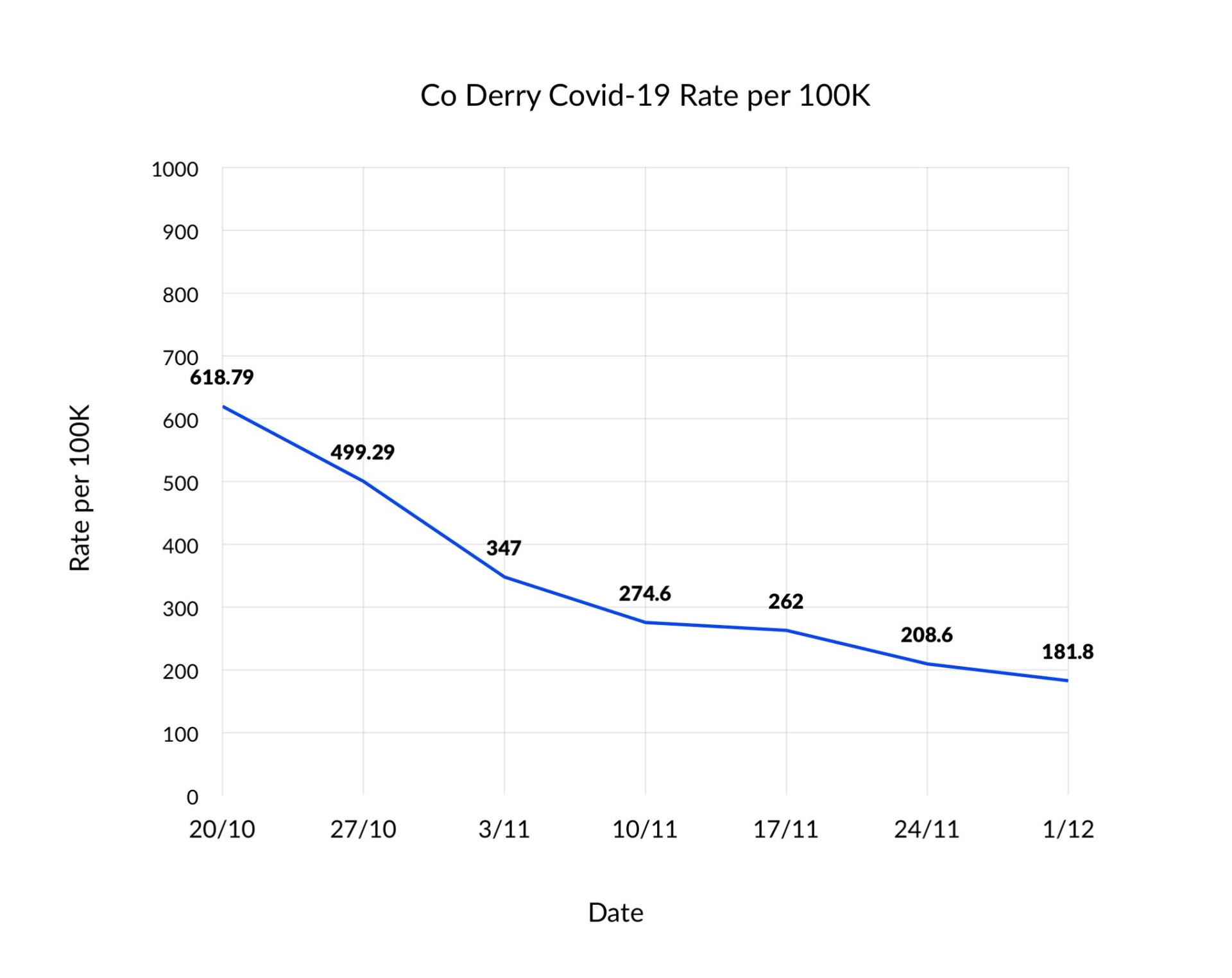 County Derry's overall rate per 100,000 of population has been in steady decline since restrictions were first introduced back in October. 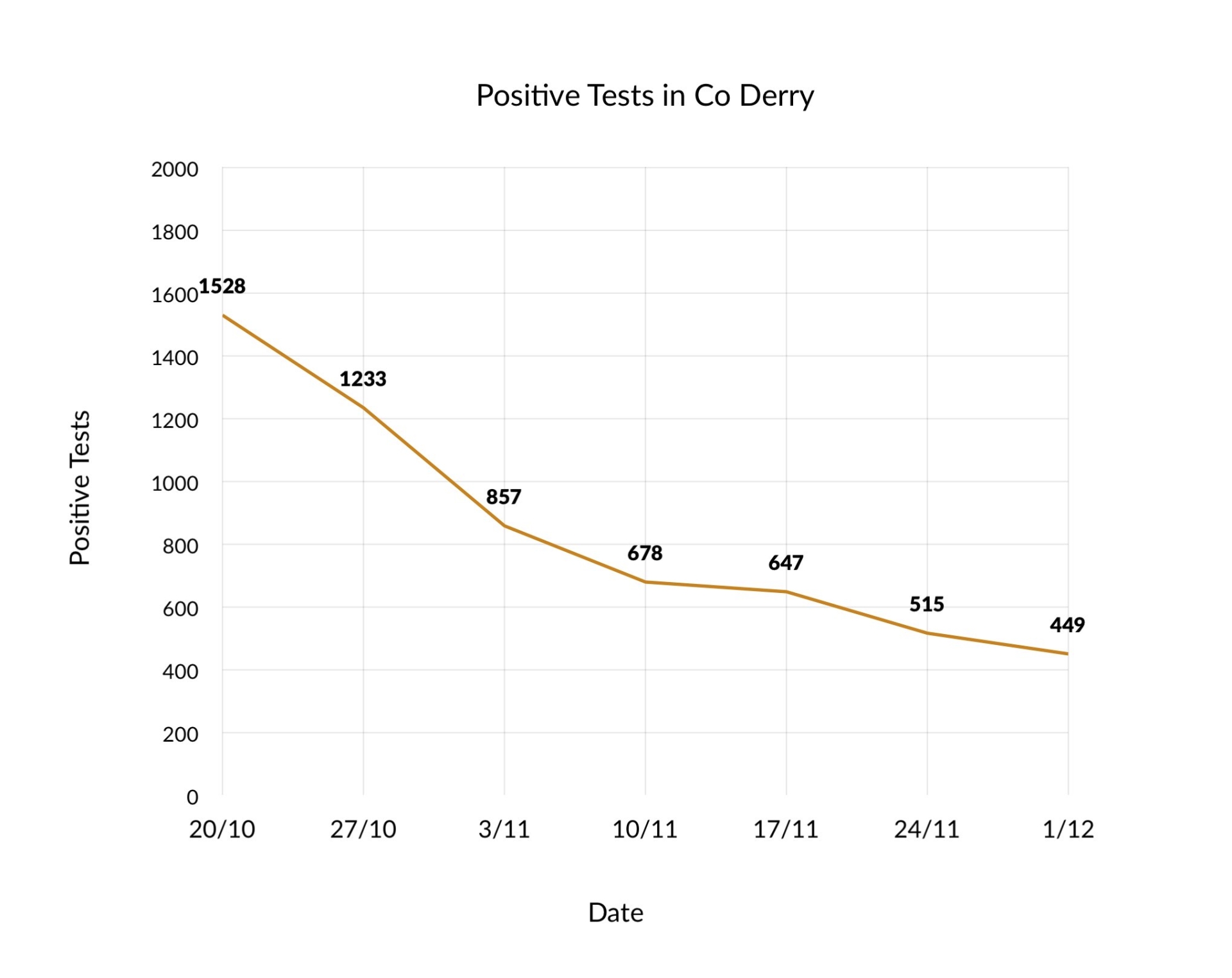 The number of positive tests has also declined, but the rate of reduction has slowed since the beginning of November with the return of pupils to schools.

There was a 12.8% decrease in the number of positive tests recorded over the last seven days. 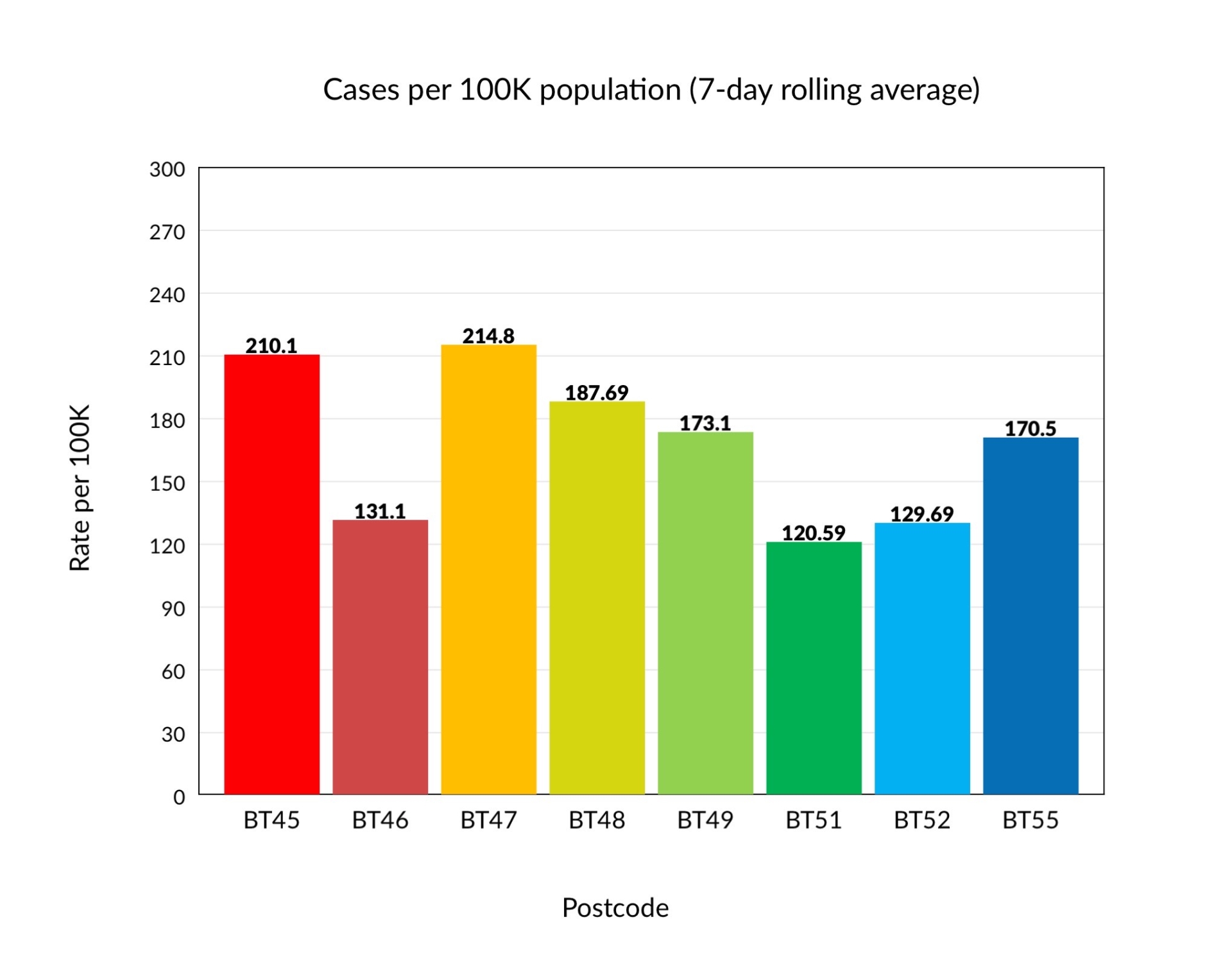 The difference in rates among the different areas has reduced and levelled out over the last number of weeks.