Family heartbroken by the tragic events of the past week 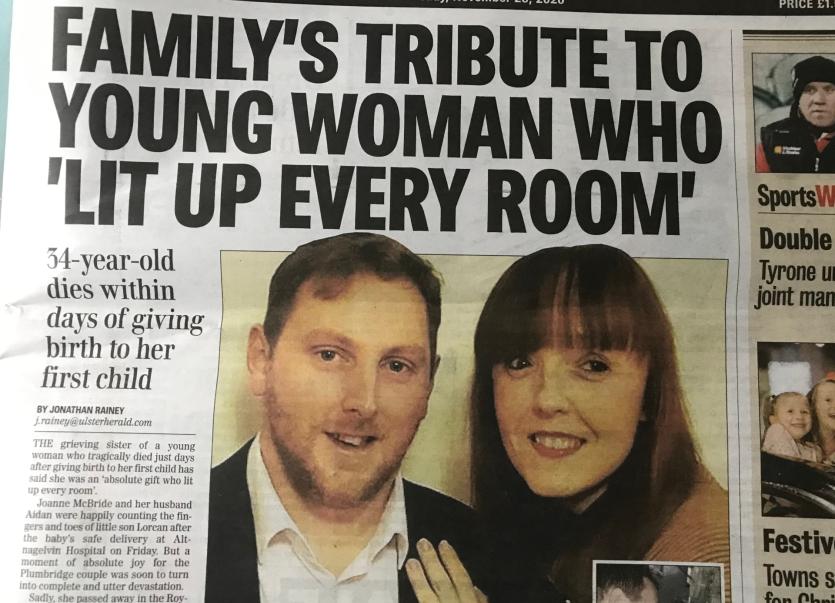 Tributes have been paid to a young woman who died a couple of days after giving birth to her first child at Altnagelvin Hospital.

A short time later her heart stopped and she had to be resuscitated.

A scan revealed that 34-year-old Joanne had suffered a massive build-up of fluid on her brain.

She was taken to the Royal Victoria Hospital in Belfast for surgery but her family were told on Sunday that she would not pull through.

Joanne had been a passionate supporter of organ donation and she was kept alive on a ventilator so her organs could be donated to other people.

She passed away on Monday.

Joanne was originally from Drumquin in County Tyrone but had lived in Plumbridge, where her husband Aidan was from, for a number of years.

She was buried in Drumquin yesterday.

Speaking to the Ulster Herald newspaper, Joanne's sister, Kerry Devenney, described her as 'absolutely perfect in every way'.

"I was always in awe of Joanne, who had dealt with lost of obstacles due to health issues. She had the perfect attitude and didn't sweat the small stuff," said Kerry.

"She was cool, calm and collected with a beautiful persona that would light up the room. She was our wee ray of sunshine, an absolute gift."

Joanne had worked as a social worker at the Omagh office of the Probation Board of Northern Ireland.

Her family requested that donations in lieu of flowers be made to the Friends of Altnagelvin Neo-Natal Unit in recognition of the care that Lorcan received from the staff there.