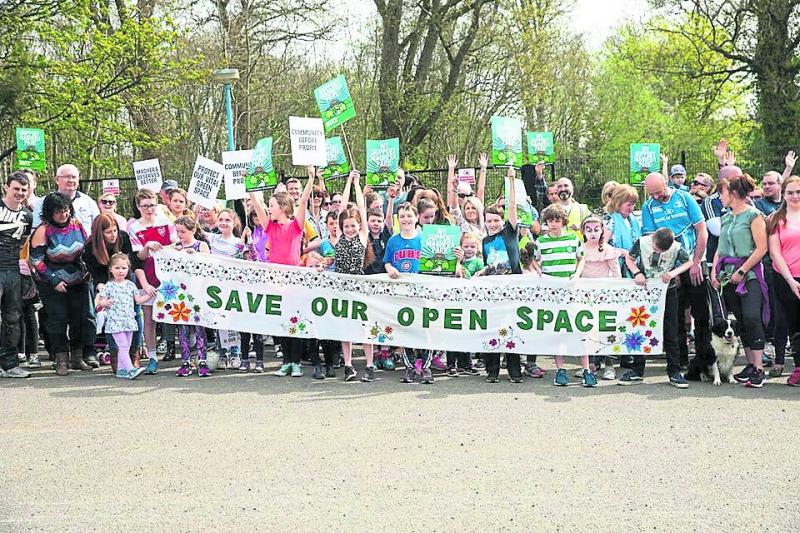 A controversial planning application at the site of an old secondary school in Maghera is to be scrutinised by the Department of Infrastructure.

Mid Ulster District Council's Planning Committee had agreed in February to approve the application, subject to a series of conditions the council felt would protect the natural heritage of the area.

The application has faced opposition from a local group, 'Take Action for Maghera Park', campaigning to preserve the area's green space.

A spokesperson for Mid Ulster District Council confirmed the decision would now determine the future of the site.

"Planning permission for the development of a business park in Maghera is to be determined by the Department for Infrastructure (DfI)," they said.

"Mid Ulster District Council, which owns the land and proposes to create up to 7 serviced sites at the location of the town’s former high school, had granted outline permission in February 2020, subject to the Department’s consideration of the matter.

"The Department has confirmed to the Council that it will now make the determination in line with the provisions of The Planning General Regulations (Northern Ireland) 2015 as it is the intention of the Council to determine its own application for land to be developed commercially by others.

"The plans propose the creation of up to 7 serviced sites, with qualifying businesses constructing their own purpose-built facilities ranging in size from 4,000sqft to 20,000sqft.

"The land on the Tobermore Road has been earmarked as a site to address a gap in the availability of land locally for light industrial use and to meet an identified demand from local businesses.

"The Council’s Planning Committee had agreed (4 February 2020) to approve the application, subject to a series of conditions intended to protect the area’s natural heritage and address other issues including roads infrastructure, drainage and flooding.

"In line with planning legislation, the outcome of the Planning Committee’s determination at that time was notified to the Department for Infrastructure (DfI) for its consideration."

Take Action for Maghera Park welcomed the move in a statement on their Facebook page and said the Council had 'underestimated' the strength of the group's opposition.

"The final decision to sign this off has been taken out of Mid Ulster Council’s hands and will now be decided by Planning HQ in Belfast," they said.

"This ‘call-in’ will mean that the 2 applications will be scrutinised in the finest detail in Belfast, by people who effectively have no skin in the game.

"Over 2 years ago, on a weekday afternoon, the ‘community’ was presented with the Council’s plans to industrialise this important site.

"We have always maintained it had the look of a done deal. Indeed, community consultation appeared to take the form of, ‘here’s what you’re getting’.

"They vastly underestimated the affection the Town held for the history and future potential of this site.

"A Campaign to save it, re-purpose the mature grounds as a Park (which made much more sense) and keep it within the community, quickly established a breadth of support across the whole of Maghera, the like of which hasn’t been seen before.

"Any plans to develop this site will be held to the highest standard of investigation, and the community’s input cannot be ignored.

"We will be in contact with the Dept of Infrastructure and establish what further input we can offer, as a community, to support their investigation. This is a good news day for Maghera Park."