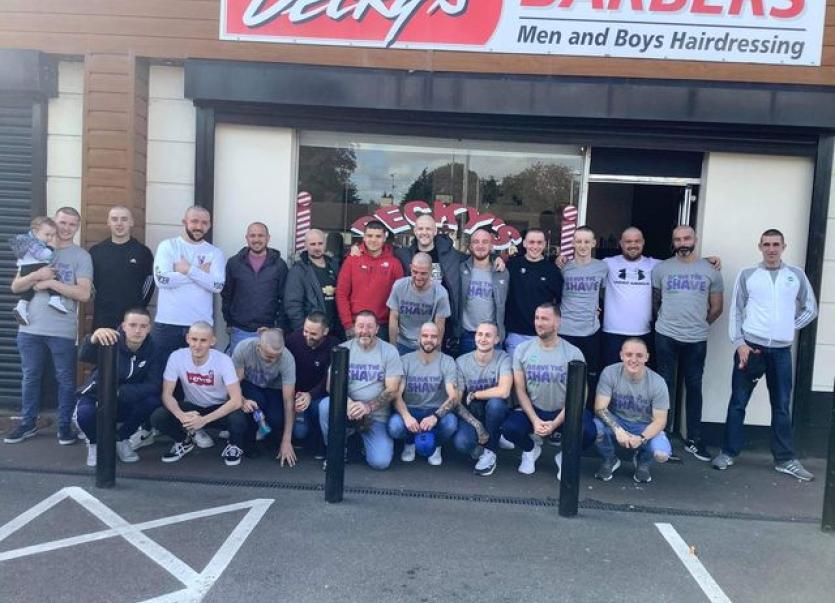 Some of those who got their heads shaved.

Twenty five friends and relatives of a young Derry man with cancer have had their heads shaved to raise money for a charity supporting him.

David McFaul, who is just 24 years-old, was diagnosed with testicular cancer in April.

Since then, he has undergone chemotheraphy treatment at the City Hospital in Belfast.

However, fighting the disease has made more difficult for David because of the coronavirus pandemic.

He has received great support, however, from the CLIC Sargent charity which provides a range of support for people with cancer and their families.

In an effort to show their appreciation to the charity, David's friends and relatives recent got their heads shaved to raise much-need funds for CLIC Sargent.

David's pal Decky McLaughlin opened up his barber's shop to host the event which raised just over £3,000.

David’s mum, Arlene, saiid they had never heard of CLIC Sargent before his diagnosis.

“As a mum I was devastated beyond words that my son was had to endure the cancer world on his own because of Covid-19,” said Arlene.

“As a parent watching your child go through those hospital doors on their own is soul destroying and although it wasn’t about me this was my child that I carried for 9 months, gave birth too and it was my job to protect him, but unfortunately for this horrible disease I was helpless.

“We were then put in touch with Simon Darby from CLIC Sargent, and also were told about Amy’s House – a home from home that was a few minute walk away from the City Hospital.

“Simon has been David’s rock throughout this whole nightmare.”

“It made David’s recovery a lot less sore on him, if he had had to travel every day for treatment he would have been destroyed more mentally and physically.

“It would be a 140 mile round trip for us as well which would have been exhausting.

“We could walk the five minutes with David to the doors of the City Hospital and once his chemo had finished we could walk up and collect him and bring him back to Amy's House to recover.

“We took it in turns to stay with him, his partner Franzie, his dad Andrew and myself for the 3 chemo cycles.

“The home from home was amazing, so homely, warm, fresh, clean and friendly.

“It was a bit strange staying somewhere that you don’t do your own housework, but it meant our focus was purely on David.”

The local woman said her family would never be able to thank CLIC Sargent enough for the support they have received.

“I will be eternally grateful and will support CLIC Sargent in any way I can can, it will be a charity I will hold dear to my heart forever.”

“They have raised £3028 from their event for CLIC Sargent and have also opened a Support Me Fund for David to encourage the community to help support the charity.

“Learning Pool in Derry have added to the fund already and have donated an additional £1000.

“When cancer strikes young lives we fight tirelessly to limit the damage it causes beyond their health.

“We rely entirely on donations to fund our vital work and so we really appreciate these donations and for highlighting the charity.”

Ms Ewart said that last year in the Derry area CLIC Sargent supported 58 children and young people and their families from diagnosis throughout treatment and beyond.

“Twenty six of those families stayed at either Paul’s House – close to the Royal Hospital for Sick Children or Amy’s House, close to The City Hospital in Belfast that provides a home from home for families whilst their child had treatment, The average stay was 17 nights.”

Ms Ewart added: “Cancer isn’t stopping for coronavirus and neither will CLIC Sargent.

“Young people and parents have told us they’re struggling to cope, and they need our support more than ever.”

If you would like to know more about CLIC Sargent or are interested in fundraising or volunteering please contact Vicki Ewart at CLIC Sargent NI on 07771 818660 or vicki.ewart@clicsargent.org.uk.