The change will allow existing civil partnerships to be converted to marriages. 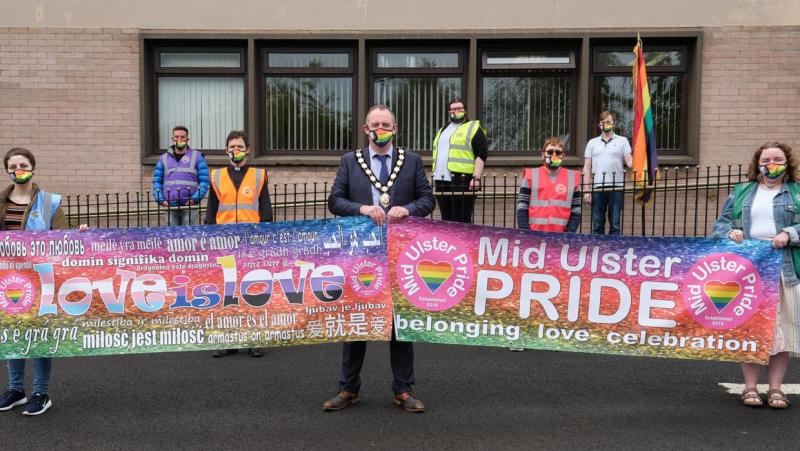 Some members of Mid Ulster Pride pictured with Mid Ulster Chair Cathal Mallaghan at their recent parade in Cookstown.

A change in the law that will enable same sex couples to convert previously granted civil partnerships to full marital status has been welcomed by a local LGBT advocacy group.

The move followed a six-week public consultation for what conversion rights couples should have in Northern Ireland.

New regulations will provide a three-year period in which existing civil partnerships can be converted into a marriage, with fees for the process being waived in its first year.

Josh Cuddy, chairperson of Mid Ulster Pride, said the new law, which will come into force on December 7, was a further step forward for LGBT couples.

“It's fantastic to see this commitment being made,” he told the County Derry Post.

“There are a lot of LGBT people, especially those who have chosen to stay in rural areas, that do hold 'traditional' views.

“They want to get married to their partner, not just commit to each other.

“Our next hope is eventually we get churches involved, as there's quite a lot of LGBT who still have quite a strong faith.

“It's fantastic that people who have already committed to their partners are now able to take it one step further and be fully recognised in the eyes of the law as a married couple.

“We know our relationships are valid.

“Some in the LGBT community see it as just a choice of words, but there are others who see it as full validation coming from outside our own community.”

Mid Ulster MLA Emma Sheerin said she wanted to see the legislation for the process implemented as soon as possible.

“I welcome today's development that will see couples being able to convert civil partnerships to marital status if they wish,” she said.

"This is a welcome move and I want to applaud all the campaigners who have fought for the basic right of full marriage equality.

"There should be no barriers in place stopping couples who love each other from getting married and enjoying the same rights as everyone else."