A partnership between government and the provider is helping bring broadband to more rural areas. 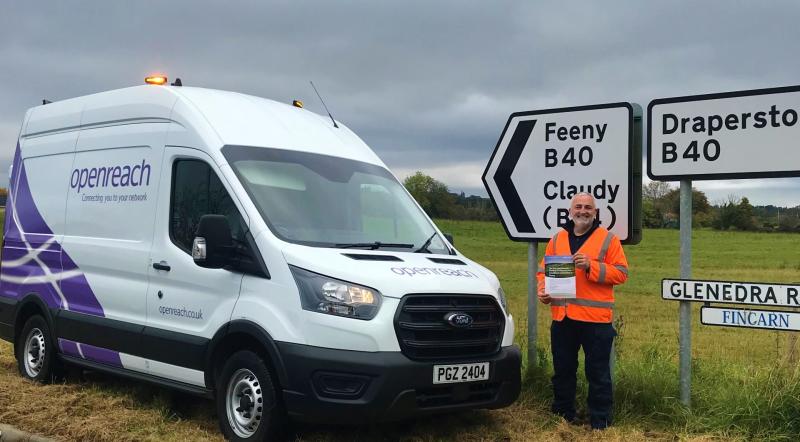 Rural areas of Feeny and Park could see an improvement in their broadband under a new government scheme working in partnership with providers.

The Community Fibre Partnership Scheme allows residents to claim a government 'gigabit' voucher worth up to £1,500 for every household and up to £3,000 for every business.

Vouchers can then be pledged to Openreach to cover the cost of delivering full fibre broadband to the entire exchange area.

Once a quota has been reached to cover the estimated cost of infrastructure works, Openreach will begin work on installing broadband that could reach speeds of up to 100Mps.

Causeway Coast and Glens Councillor, Kathleen McGurk, has said the scheme will help deliver broadband to areas otherwise not seen as commercially viable for providers.

“This is a first for Openreach who intend to deliver the scheme alongside already planned works in the Feeny area,” she said.

“However, by topping up the planned works with the pledged vouchers, it will allow the broadband to be delivered to roads and areas which would not normally be considered due to low population density and high costs.

“These works are scheduled to be completed before the end of the financial year so the sooner the target is reach the sooner Feeny & Park can be enjoying high speed broadband.”

Cllr McGurk has urged residents to pledge their voucher and help meet Openreach's target as quickly as possible.

Residents can visit the 'Connect My Community' section of the Openreach website for more information.