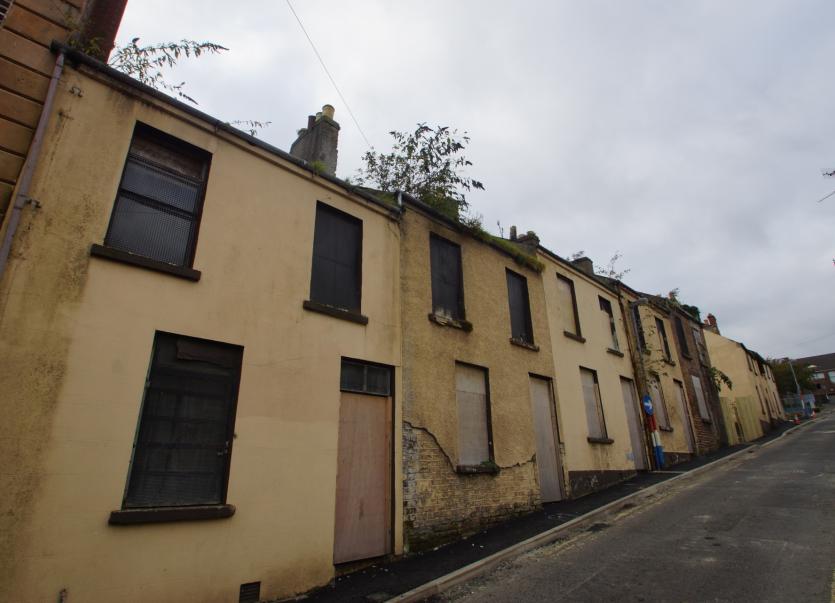 A Derry street in which all the houses have been derelict for many years looks set for a major transformation.

New housing at Wapping Lane is one of four new regeneration projects which are helping to change the face of the Fountain area of the city.

Wapping Lane runs from Abercorn Road up to the Fountain.

The Derry News revealed last week that full plans have been submitted to the local council for a new £5m apartment complex between Carlisle Road and the Fountain.

If approved, the complex will incorporate 36 apartments and business space in buildings along Hawkin Street and Fountain Street.

Work is already underway to give the Cathedral Youth Club in the heart of The Fountain a facelift, and designs for a new building for the New Gate Arts and Culture Centre (below) in Hawkin Street, which will incorporate a 140 seater performance space, dance studio, tuition and art rooms, as well as a cafe and rooftop terrace, are nearing completion.

In addition to this, plans for a row of new two-bed homes to replace the derelict housing in Wapping Lane are due to be submitted for planning approval by local developer the Martin Group in the coming weeks.

Kyle Thompson, Co-ordinator at the North West Cultural Partnership, which is based in The Fountain, said the once rundown area will become an attractive place for people to live and work.

"I have been liaising with various statutory agencies and private developers for a number of years, highlighting the need to address vacancy and dereliction in the area.

"Now that all the properties in Wapping Lane are under the ownership of one developer they can progress to the next stage and we hope the proposed two bedroom homes will attract people into the area to become part of this vibrant community.

"This area is also steeped in history and is one of oldest inhabited places in the city outside of the City Walls.

"Hawkin Street actually appears on some of the very first maps of the area."

For many years,  the Fountain's reputation was synonymous with interface attacks, but Mr Thompson believes the recent work of the North West Cultural Partnership and the New Gate Arts and Culture Centre to celebrate the history of the area has helped restore a sense of pride amongst the residents.

"There are a lot of misconceptions about The Fountain, but providing people with information about its history and culture and showcasing it in a positive light we can show them that this is a vibrant community that is a very attractive place to live.

"The Housing Executive houses here are in good condition and there is a waiting list of people wanting to get houses here.

"The Fountain doesn't have any antisocial activity or crime, it has a great primary school, a youth club and an arts and cultural centre so it's a great place for raising a family.

"It would be great to see some people come back to the area or new people to come and join the community here.

"There is a small population and in a lot of cases kids grow up and move into the area themselves- they don't go too far.

"You have your family living around you and it makes the area very safe because everyone knows each other and they look out for each other."