What is the current Covid situation in my area?

We break down County Derry by postcode and look at the 7-day rolling averages from the testing data. 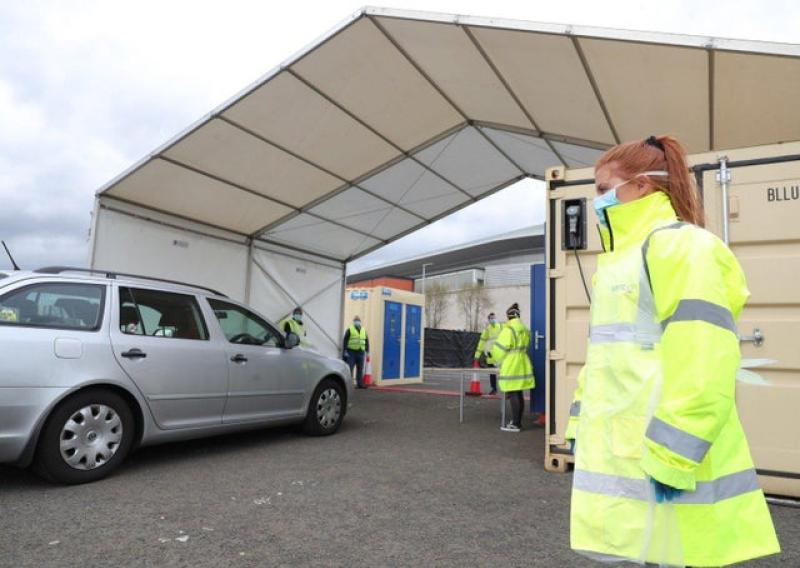 The rates of Covid-19 in County Derry have reduced since the introduction of restrictions in the Derry and Strabane area a week prior to restrictions being rolled out across Northern Ireland.

Last week the Department of Health began to publish the seven-day rolling data by postal area, giving the public a clearer picture of what the virus looks like locally. 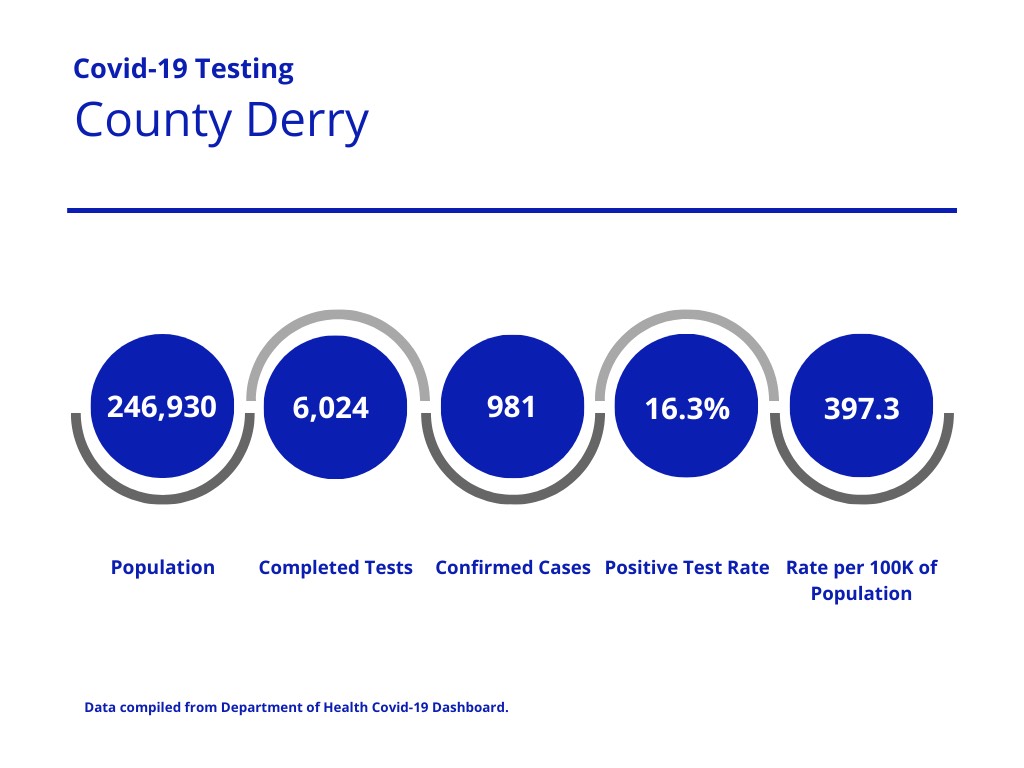 Overall, there have been 6,024 tests in the county, with 981 of them confirmed as positive.

The number of tests completed has reduced by 35% since last Thursday, with the positive rate also falling from 17.5% to 16.3%. 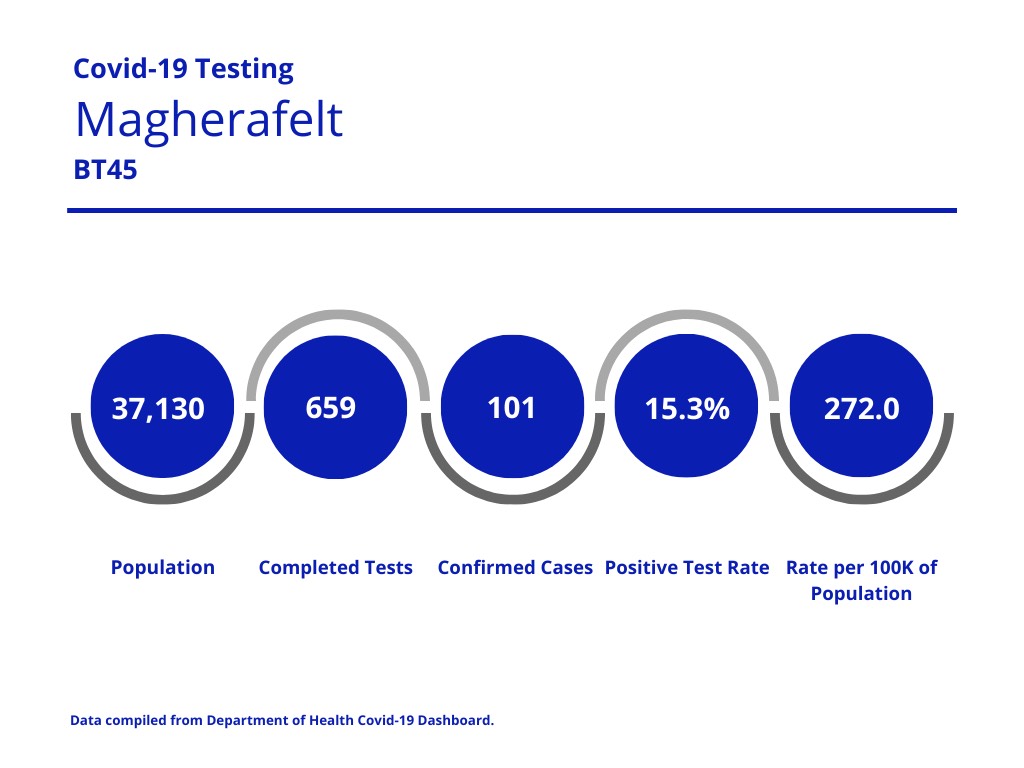 Magherafelt has the highest rate per 100,000 of population outside the city at 272.0, and has experienced a reduction from 439 last Thursday.

The 7-day rolling average number of cases dropped from 1,018 to yesterday's figure of 513, with the number of positive cases falling from 163 to 42. 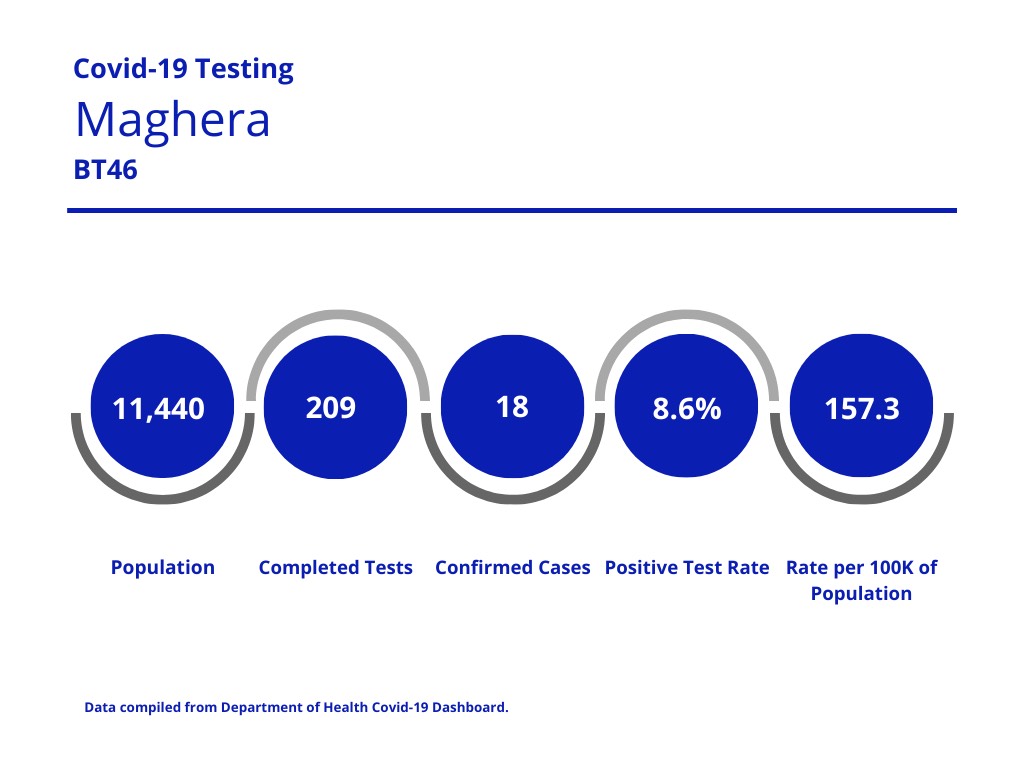 The positive rate in BT46 has reduced from 10.7% last Thursday to 8.6% by yesterday's figures, with the number of tests completed falling from 309 to 209. 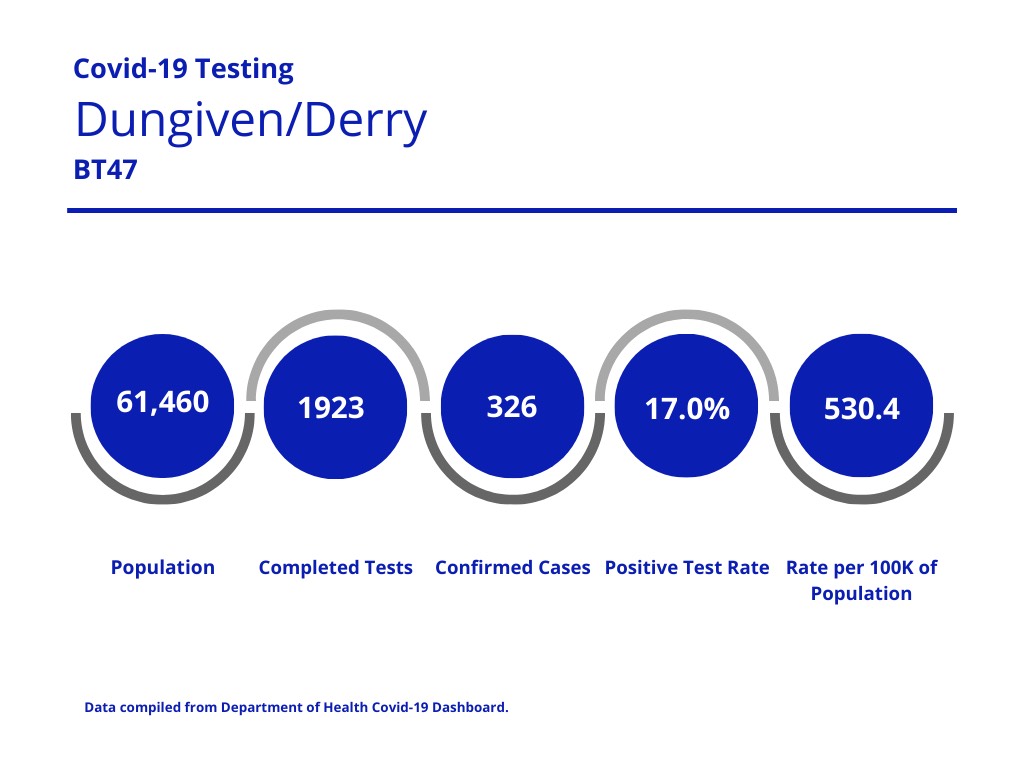 The size and demographics of this postal area mean its data is distorted, but the area has experienced a downturn in the virus' spread since reductions were introduced in the Derry and Strabane council area. 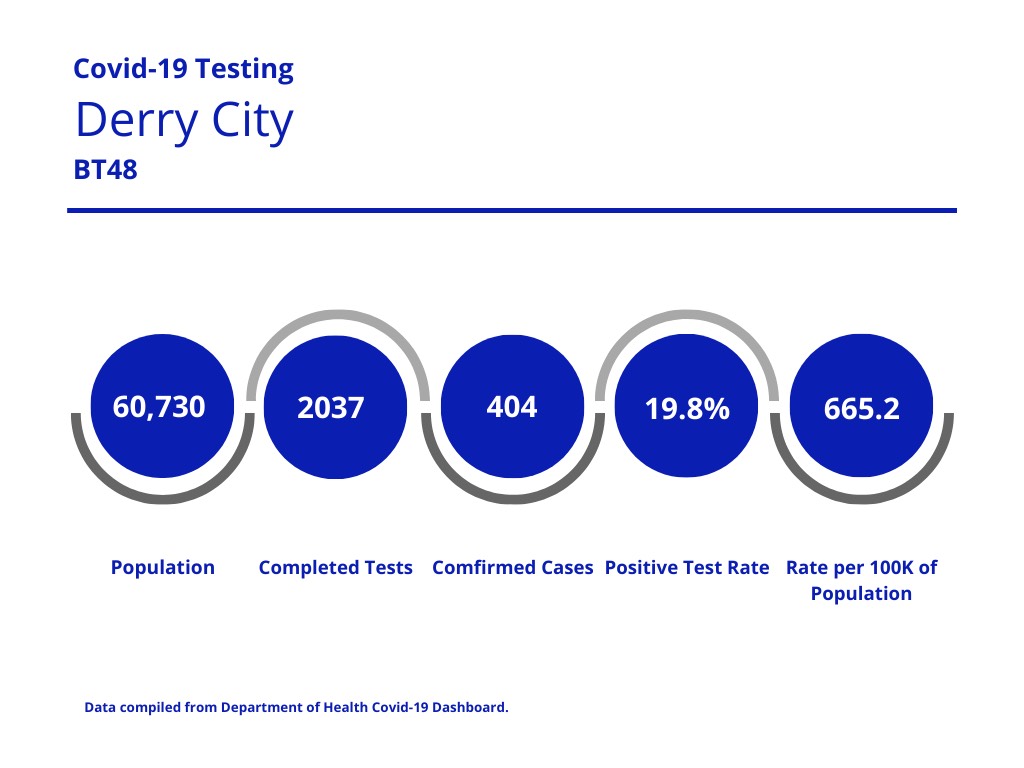 Since restrictions in the Derry and Strabane area were introduced, there has been a marked decrease in the rate of the virus in the area. 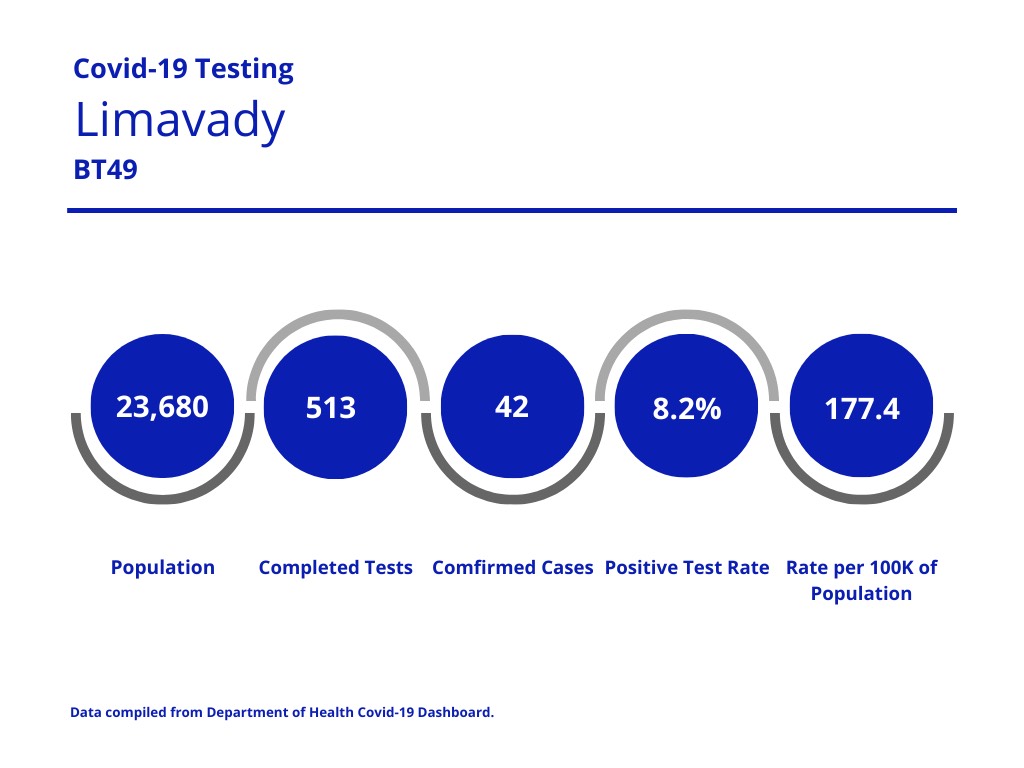 With 42 of 513 tests over the last seven days confirmed as positive, the area currently has a positive rate of 8.2%, just slightly down from the figure of 9.0% last Thursday. 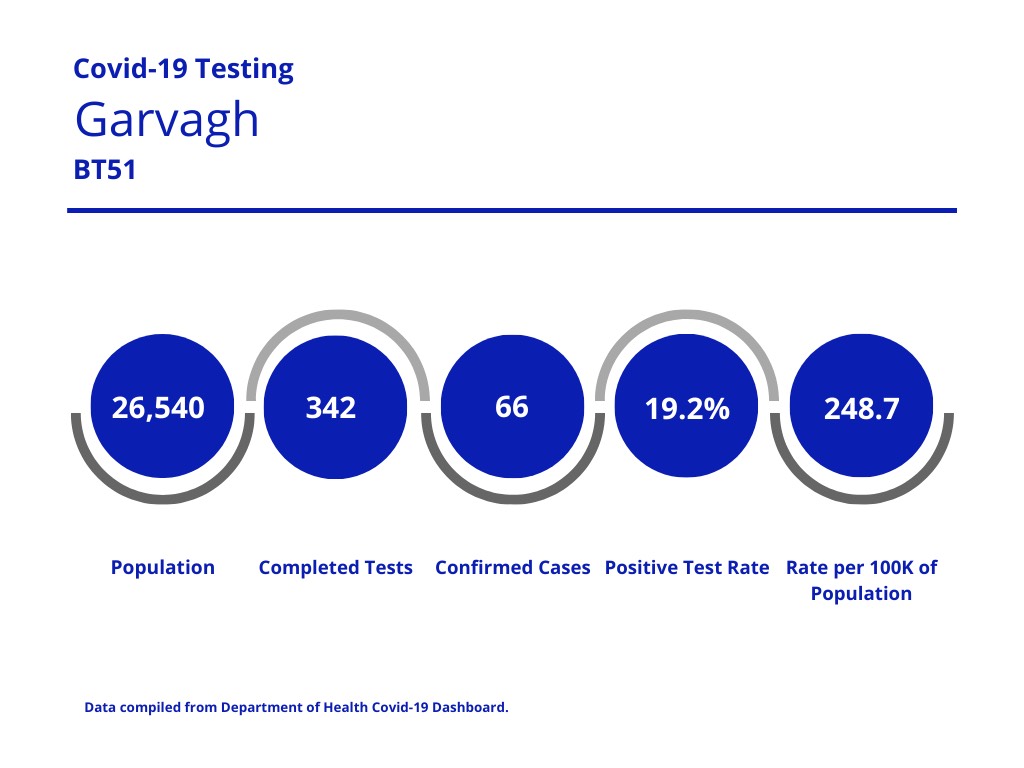 The Garvagh area currently has the highest percentage of positive tests outside the city at 19.2%, and its rate per 100,000 of population - 248.7 - ranks fourth in the county.

The seven-day rolling number of tests has reduced from 505 last Thursday to 342 on yesterday's data, with the number of positive cases has also been slightly reduced from 87 to 66. 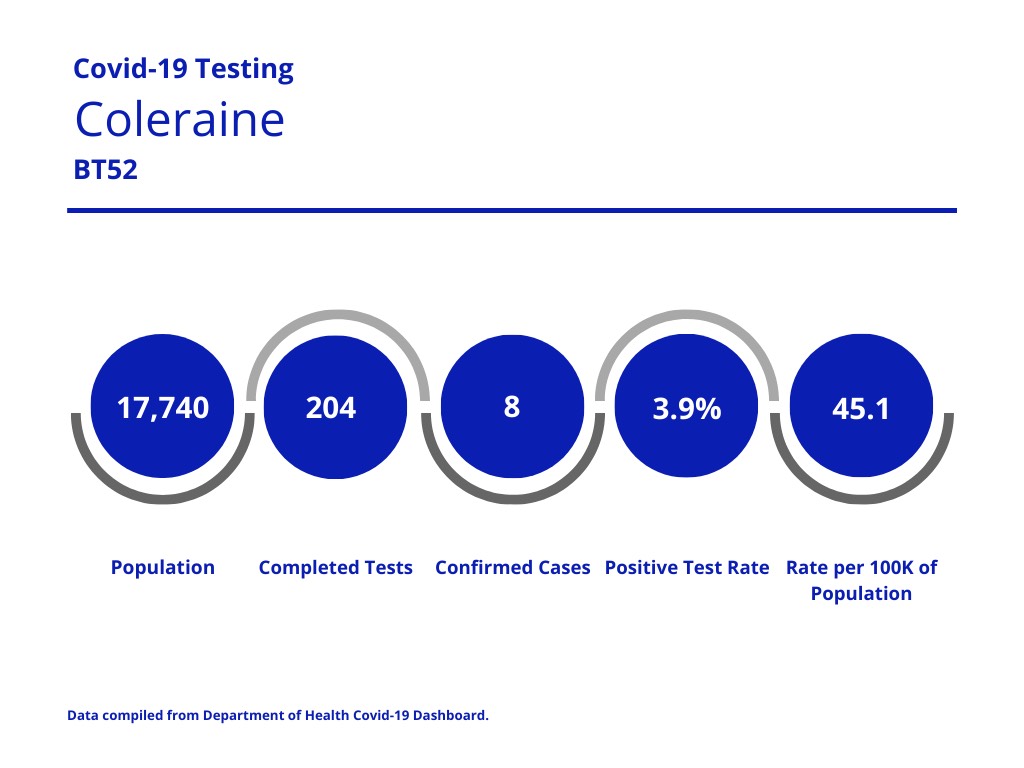 The north coast down currently boasts the lowest rate per 100,000 of population in County Derry, with a figure of 45.1, and a positive test rate of just 3.9%.

There were just eight positive cases in the area over the last seven days, a reduction from 27 on last Thursday's data, while the total number of tests completed fell from 309 to 204. 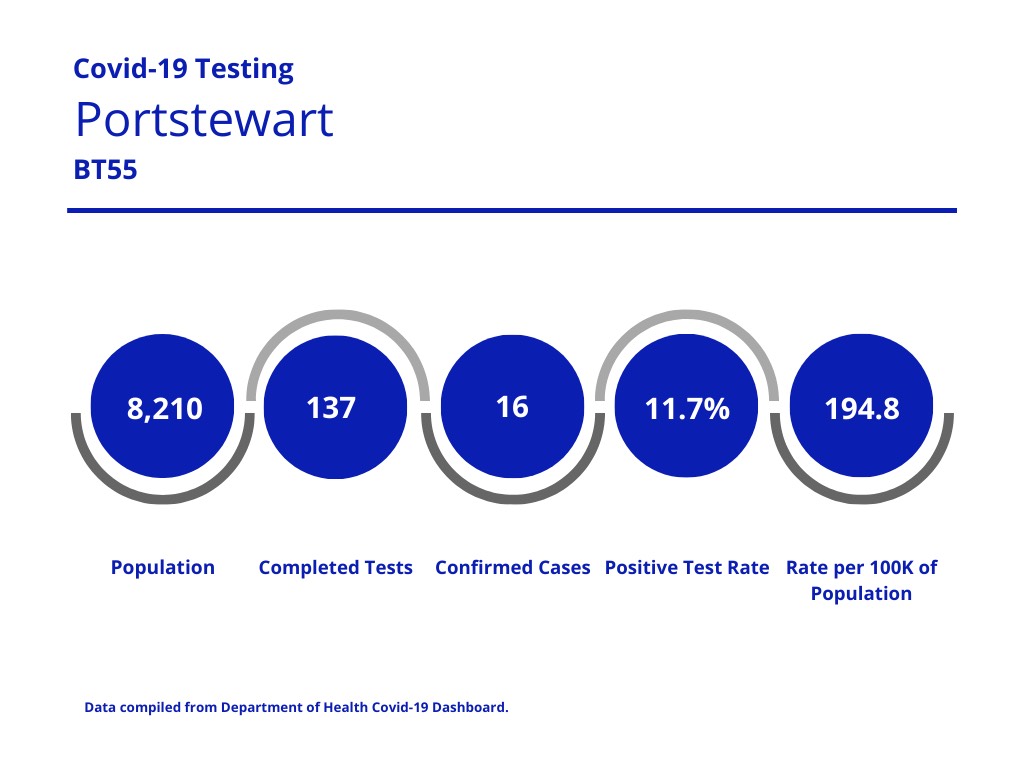 Portstewart has also experienced a downturn in the 7-day rolling average of positive cases, falling from 20 last Thursday to 16 on yesterday's data.

The rate of positive tests remained reasonably constant, falling only from 11.8% to 11.7%.