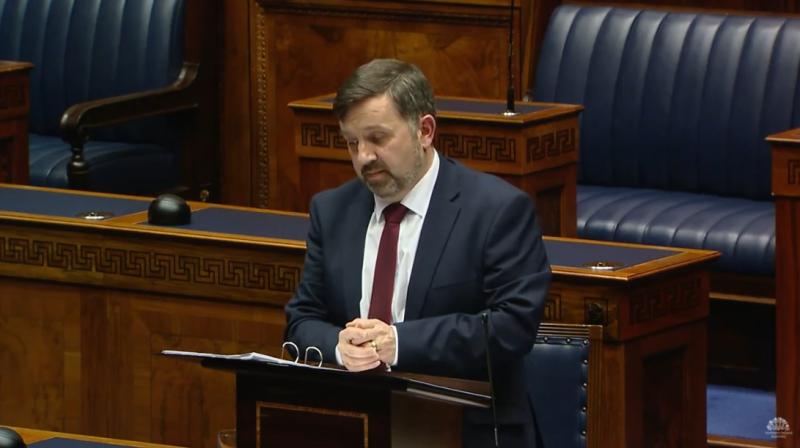 Derry representatives have stressed the need for long-term sustainable funding for a suicide prevention service in the city which has helped over 475 people.

He said the Foyle constituency continues to see some of the highest rates of self-harm in the country with elevated numbers of individuals engaging in suicidal behaviour at the bridges and river.

“Each of these are human beings within our constituency, they are not just statistics.

“Recent figures will point to a similar shocking trend.  Whilst there are many great organisations and charities out there providing vital services, these devastating figures make the case for the need to do things differently.

“Far too many lives have been lost and families devastated, one life lost is one too many.”

After years of campaigning by bereaved families and activists, a one year pilot was established by the local council in January 2019.

Since then it has received short-term funding with no commitment given to secure its long-term future.

The latest announcement of £60k from the Department of Health (DoH) will enable CCIS to continue until March.

Mr Middleton welcomed the latest extension but said it was ‘unacceptable that a fight has to be put up to time and time again’ to have the service funded at a basic level.

An evaluation report points to the fact it has been successful in terms of its social and economic impact.

Referring to statements made by the Health Minister he said ‘we don’t need further strategies, we need funding and we need support’.

People are avoiding emergency departments during the pandemic which further emphasises the need for this service, he added.

He recognised the workload the health minister is currently grappling with but made a plea that the same arguments don’t have to be rehashed in March 2021.

Sinn Féin MLA Martin Anderson said from 1998 to 2018 there were 5,087 people who took their own lives in the North – more than the number who died during the Troubles.

Derry and the North West has endured a suicide and mental health ‘epidemic’, she said, ‘it shakes communities to their core and tears families apart.’

“Yet this service limps on month after month receiving breadcrumbs from the Department of Health’s table.”

The SDLP’s Mark H Durkan said this service has unanimous support and the council led the way by establishing the service.

“I’ve heard from people who say they would not be here today had it not been for that community crisis intervention service.”

He added that ‘the spectre of closure’ is not the way to run any service but particularly not a service of this nature.

“The rates of suicide and self-harm in the North West are shocking, they’re scandalous and it’s just so sad.

“My thoughts are with all those families devastated by suicide and people battling demons every day.”

They were supported by other parties during the debate including Gerry Carroll of People Before Profit who said Derry and the North West, like his own constituency of West Belfast, ‘suffers disproportionately from the legacy of deprivation and disinvestment.’

Minister Swann concluded the debate by pointing out that mental health is a cross-cutting issue and the DoH was the only department to respond to CCIS call for funding assistance.

A separate funding arrangement is being explored by the DoH and Extern and funding was provided to give them space to carry out that work, he said.

Over 475 people have received critical and immediate mental health support thanks to the service.

“I have no doubt that this has saved lives,” he added.

Suicide crises place pressures on the police service and he therefore believes that the justice sector should contribute in future along with other departments and authorities.

The mental health action plan will review crisis services and it will be concluded by March 2021 and mental health strategy will be published by July.

It will make recommendations for future delivery.