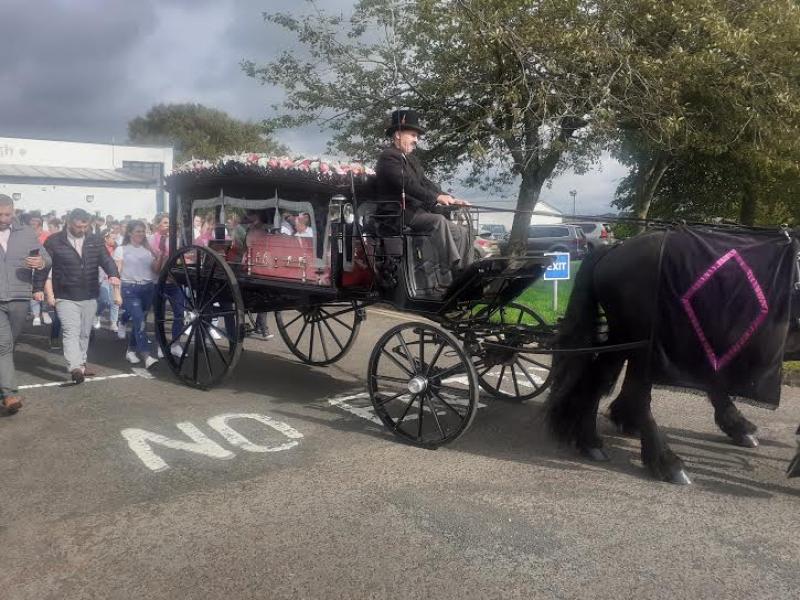 Kelsey Stokes' pink coffin being taken for burial in the City Cemetery.

The funerals have taken place of the two young members of a Derry family killed in a horror road crash in England earlier this month.

Cousins Shauna (17) and Kelsey (3) Stokes died in the collision involving a Peugeot car and a van in County Durham on September 2.

They, and other members of their family, had travelled to celebrate the 17th birthdays of Shauna and her twin sister Kelly.

A number of others were taken to hospital following the crash.

Shauna's mother, Michelle, was unable to attend today's joint funeral service in St Joseph's Church in Galliagh as she remains in hospital for treatment for her injuries.

Several hundred people, many wearing photographs of the two girls on white shirts and t-shirts, attended the Requiem Mass.

A small plane flying a banner with the words '2 Beautiful Angels Left 4 Heaven' flew overhead as the remains were taken from the church at the end of the service.

Parish priest, Fr Michael McCaughey, told those present the tragedy had left both families and the wider family circle 'heartbroken.'

He added: “Our prayer is that these two young people in the shortness of their lives rest in the gentleness of God's presence in Heaven.”

Following the service, Kelsey's pink coffin was placed in a horse-drawn carriage to be taken to the City Cemetery for burial.

Shauna's remains were also placed in a horse-drawn carriage to be laid to rest in Park, County Derry.