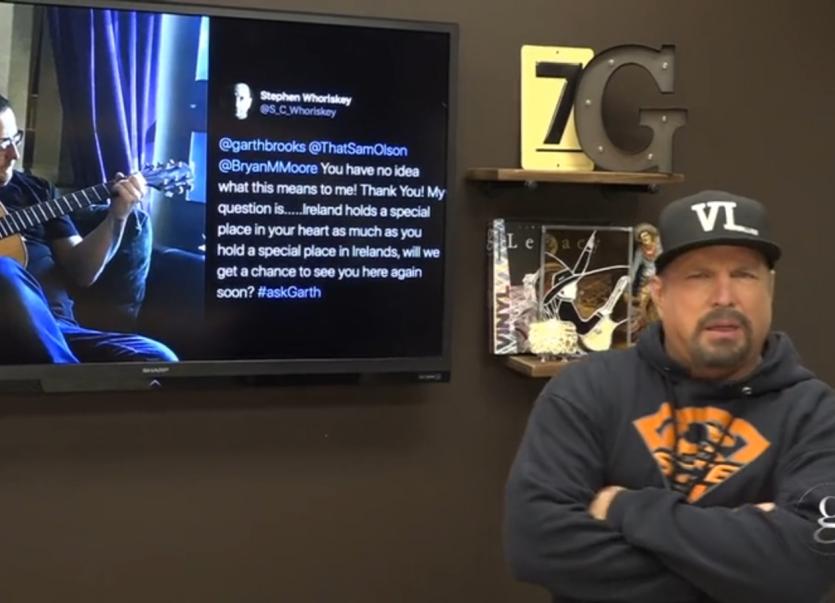 A Derry man who was sent a guitar by international country singing star Garth Brooks 'went a funny colour' after discovering he has been given another one, and this model is worth almost £2,000.

Stephen Whoriskey has loved Garth Brooks’ music since he was a teenager and credits it with getting him through many tough times.

The 36-year-old has struggled with anxiety, depression and insomnia on and off for years and lockdown brought his mental health problems to the fore again.

In a bid to give him a distraction his wife Kimberly set him the challenge of learning to play the guitar and promised she would buy him the same model as the country music superstar if he succeeded.

When Garth heard about Stephen's struggles and his wife's kind gesture, he offered to send him a guitar, which arrived recently.

But when Stephen sent him a snap of him with his new instrument to say thanks, Garth said 'that's not the right guitar' and a new 'GB7C' guitar is now on its way to Derry.

The singing star made the announcement on his weekly 'Inside Studio G'  video message which Stephen watches religiously, but last week he paused the show and didn't get to watch the end.

It wasn't until he got a phone call from Jason Bryan of the Garth Brook's official fan page that he realised he was getting a second guitar.

"I went the funniest colour I have ever gone," said Stephen.

"My wife said to me 'what's wrong, you're a terrible colour' and I said 'I'm getting sent a signature series guitar'. That was the one she was going buy me and the one he said he would get me.

"When the guitar arrived and it wasn't that one I couldn't have cared less because Garth Brooks had sent me a guitar."

When Garth asked Stephen to find another worthy recipient of the first guitar, he decided to go one better and auction it off to raise money in memory of his dear friend Martin O'Donnell, who lost his life to lung cancer in December.

"I didn't want to just help one person, I wanted to help lots of people," said Stephen.

"I contacted the Garth Brooks fan page and asked if they would hold a silent auction for it.

"Everyone on that page knows the story of the guitar and that it came from Garth."

The money raised will be split between the Foyle Hospice and Northern Ireland Hospice Care.

"He was diagnosed in May and they thought he would have about two years but he passed away in December.

"He was a great friend to me and a great person.

"I visited him in the hospice before he passed away and I saw the amazing care he had and I know they gave great support to his family too.

"I'm not a religious person, but I genuinely believe that he has played a hand in all this and that he would have a good laugh about it too."