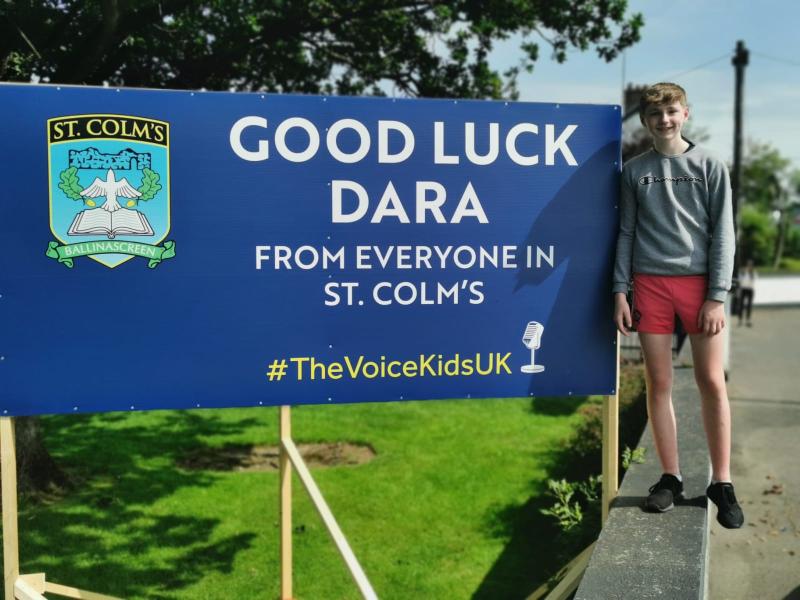 Dara McNicholl pictures with a sign of support outside his school.

Moneyneena teenager Dara McNicholl has reached the last twelve of this year’s The Voice Kids competition.

The 13-year-old performed a version of Shakira’s ‘Whenever, Wherever’ along with Paloma Faith's other two acts that left the excited coach rocking in her chair.

In the end, Dara got the nod ahead of fellow Irish contestant Rachel, who brought her own unique yodelling style to the competition, and former Atomic Kitten singer Kerry Katona's daughter Heidi.

The St Colm’s High School pupil forms part of a trio of acts chosen by Paloma Faith to represent her in the semi-final, along with Isla Croll and Hayley.

“He has no idea about how brilliant he is,” said Paloma.

“He has a very special voice that’s bigger than him. It’s off the chart.”

Dara said “would never in a million years' have picked the Shakira number, but he put his own twist on it while also being praised for being supportive towards the other contestants.

His U14 teammates from St Colm’s GAC will get another chance to see Dara on the screen as he progresses to the semi-final of the competition next week.

“The teachers, staff and pupils of St Colm's High School are delighted with Dara's success on The Voice Kids and we wish him good luck for the semi-final on Saturday night,” she told the County Derry Post.

“Dara is a very talented young man, very modest and unassuming and he thoroughly deserved this opportunity to showcase his wonderful talent.

“Everyone in St Colm's will be cheering him on this weekend.”

You can watch Dara battle it out with Paloma Faith's other acts for a place in the final when the semi-final stage is aired this Saturday, August 22, at 7.25pm on ITV.