‘We need a calm and balanced look at what is happening in Creggan’, say community workers

Concern at violence and police operations in the area 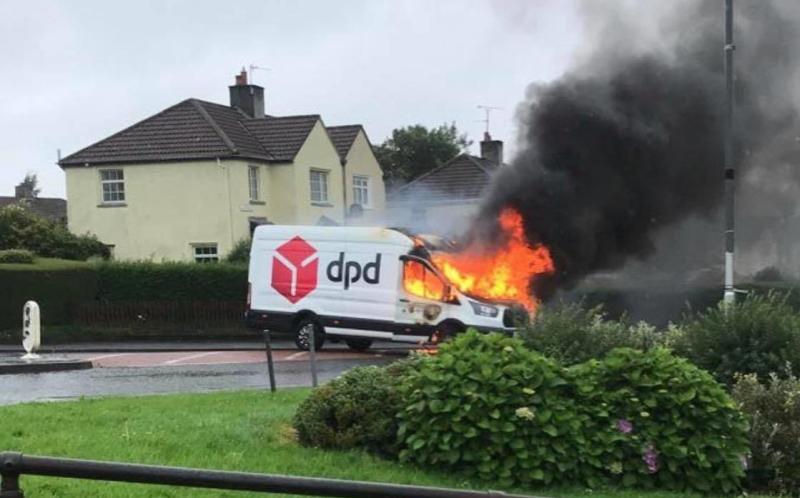 The van which was set on fire in Creggan on Tuesday.

Community leaders in the Creggan area of Derry have have called for a 'community-led review of policing tactics' after violence in the area this week.

A delivery van was hijacked at Rathlin Drive in the estate on Tuesday afternoon before being set on fire.

It was one of three vehicles hijacked in Derry on Tuesday.

Local politicians condemned the hijackings and said they had destroyed the livelihoods of the workers involved.

Community workers today said there were 'widespread concerns' about the attacks in Creggan this week.

“We, as the community, need to listen and to speak out, to ensure that everyone fully understands the negative consequences of such events and the social, economic and reputational damage to individuals, families and the wider community,” the statement said.

“Creggan has been fully compliant to public health guidance, and extremely resilient and considerate during the Covid lockdown – an exemplar in how a community should respond to a crisis.

“According to current statistics, this area has among the lowest reported crime figures in the city and, contrary to the widely-reported, albeit ill-informed, perception, Creggan is in fact a very safe and caring community.

“The last number of weeks, however, have seen a number of serious incidents which we believe require further investigation.

“CNP believe there is an underlying context to this week’s disturbances, which has gone largely unreported and hence has, again, led to a very one-sided picture of this area being portrayed.”

The community workers said young people and families had told them that they are being 'deliberately targeted by highly aggressive, frightening and quasi-legal policing procedures/tactics'.

“And it is incumbent on us, as a socially-just community, to take account of all available evidence, to establish a full and fair perspective of the situation.

“CNP in no way condone or excuse the activities leading to the physical, mental and reputational damage done by, or to, any person or property in this community.

“We are aware, however, that there is a specific context to recent events – this response did not happen out of nowhere.

“And we also believe that there is a responsibility on all of us to examine that context and engage with young people and local residents – both to listen to their concerns and to ensure that they understand the extremely negative consequences of the destruction of community or private property, and the knock-on affects in relation to the traumatic impacts on affected individuals and the denial of public services to the area.

“There is a growing concern about the ‘cause and effect’ nature of ongoing police activity in the area and recent community disturbances.

“Many within this community believe that current police actions only serve to undermine public confidence in policing and indeed the independence and effectiveness of the local and regional police oversight bodies which are supposed to hold police to account.

“Our public representatives and church leaders should be concerned, and not be afraid to speak out, about how our area is being policed and is being impacted by the resulting destruction of community or private property.”

The Creggan community workers said that following a 'process of mediation with relevant groupings, it has been established that there is no impediment to the resumption of all delivery and maintenance services in the area'.

“Tensions are high in the area at the moment – there is a great deal of hurt and frustration which needs to be acknowledged and the specific reasons for these sentiments need to be explored.

“CNP believe there is a critical need for an independent review of the recent disturbances – and their context – and will engage inclusively with the entire community to ensure that any such process will be as fair and transparent as possible.”