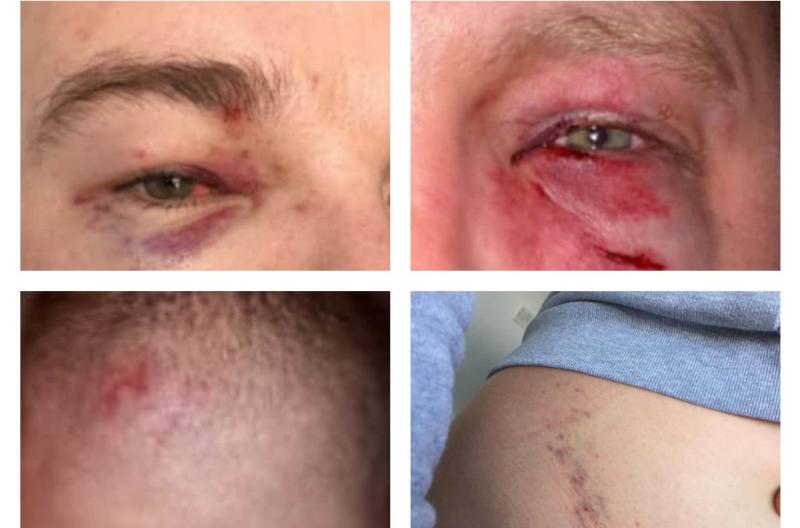 Photos of the injuries suffered by both men during the attack last weekend.

A Liverpool man who along with his partner was the victim of a ‘homophobic attack’ in Derry at the weekend has said the incident re-traumatised him.

Luke Bromilow told the Derry News that the weekend assault brought back painful memories of ‘homophobic torment’ from his early years as a gay man.

It would deter him from visiting the city again, he added.

The PSNI has confirmed that it is treating an attack on the couple as a ‘homophobic hate crime’.

Luke and his partner, Derry man Emmett Doherty, were left with serious injuries following an assault in the William Street area of the city centre just after 1am on Sunday morning.

The couple, who both live in Liverpool, had returned to Derry to socialise with family and friends.

While at a Chinese takeaway before going home at the end of the night, a group of men began insulting women and, according to Luke, Emmett intervened to defend them.

Emmett was hit on the head and suffered injuries to his eye as well as a broken nose.

After hearing homophobic language directed at his partner, Luke entered the takeaway and he too was set upon.

He was said to have been dragged outside where he was left with ‘severe injuries’ to his eye, head and body.

As well as the physical attack, the two men and a female friend were said to have been subjected to a ‘torrent of homophobic abuse’.

Both men were taken to hospital where they received treatment for their injuries.

Before the incident, Luke and Emmett were considering moving to Derry.

Luke has, however, said that the emotional toll of the assault has ‘most certainly’ altered those plans.

He explained: “On a personal level I’m traumatised and feared, and with regards to me coming back to Derry, at this moment in time I feel I won’t be back.

“In the past I have been subject to homophobic torment in my early years as a gay man. This has re-traumatised me again.”

Police confirmed that officers responded to a report of a ‘fight’ in Derry at the weekend.

Inspector John Moore said: "Just before 1:35am on Sunday morning, July 26, it was reported that a number of males were involved in a fight  outside premises on William Street.

“Officers attended the scene where they located two males with injuries to their head and to their face. Officers administered first aid to one of the males.

"We are making enquiries to establish what occurred and who was involved in this incident, which is being treated as a homophobic hate crime.”

A spokesperson for the Foyle Pride organisation condemned the weekend attack and appealed for anyone who witnessed it to come forward with information.

“All information received will be treated with the strictest confidence,” a spokesperson said.

"We wish them both a speedy recovery from this despicable attack on members of our community."

Local politicians have also roundly condemned the attack and said it is not representative of Derry which is a ‘welcoming and accepting’ city.

Anyone who was in the area at the time and saw what occurred, or has information which could assist the PSNI investigation, is asked to call police at Strand Road on 101, and quote reference number 227 of 26/07/20.

A report can also be made using the online reporting form via www.psni.police.uk/
makeareport.

Alternatively, information can be provided to Crimestoppers anonymously on 0800 555 111 or online at www.crimestoppers-uk.