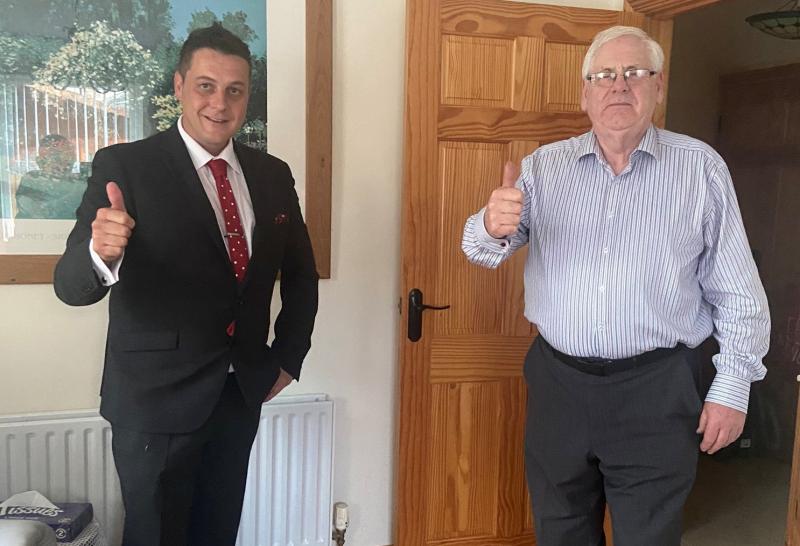 DUP Alderman Graham Warke pictured this evening at his home with Michael Gallagher whose son was killed in the Omagh bombing after the motion was defeated.

A motion calling on Derry's council to oppose the extradition to Lithuania of a man found liable in a civil court for the 1998 Omagh bombing failed this evening.

The motion was brought before the monthly meeting of Derry City and Strabane District Council by independent councillor Gary Donnelly.

He asked that the council call on the Irish government to 'do all in its power' to reverse the decision to extradite Liam Campbell to Lithuania.

Campbell is wanted in the Eastern European country on international arms-trafficking charges.

In June 2009, he was found liable in a civil court, along with convicted Real IRA leader Michael McKevitt, for the 1998 Omagh bombing.

Thirty-one people, including unborn twins, were killed in the Real IRA bombing of the County Tyrone town.

That verdict against Campbell and McDevitt followed a landmark civil action brought by relatives of some of those killed in the atrocity.

A similar motion earlier this month calling for opposition to Campbell's extradition proved controversial when it was brought before a meeting of Omagh and Fermanagh District Council.

It was supported by Sinn Féin, the SDLP and some independent councillors and passed with 23 councillors voting in favour and 14 against.

Following the controversy, SDLP leader Colum Eastwood, said the party’s councillors would be reversing their position.

Today's meeting of Derry City and Strabane District Council was held remotely because of the coronavirus pandemic restrictions.

DUP Alderman Graham Warke was joined in his home on the remote link to the meeting by relatives of some of those killed in the 1998 attack.

At the beginning of the meeting, Alderman Warke requested that standing orders for the meeting be suspended to allow the Omagh relatives to make a statement in relation to Cllr Donnelly's motion.

Twenty three councillors voted to suspend standing orders, while 16 voted against the proposal.

However, for standing orders to be suspended the decision must be supported by 80% of the councillors at the meeting.

As that required percentage was not met, the meeting continued as planned.

When Cllr Donnelly later put forward his motion, he insisted that it was not about Liam Campbell and was based purely on the denial of someone's human rights.

During his contribution to the debate, Alderman Warke read out a statement on behalf of the Omagh relatives in condemnation of Cllr Donnelly's motion.

When the motion was put to a vote, it was defeated.

A total of 21 councillors, including all the SDLP, Alliance and unionist councillors, voted against the motion.