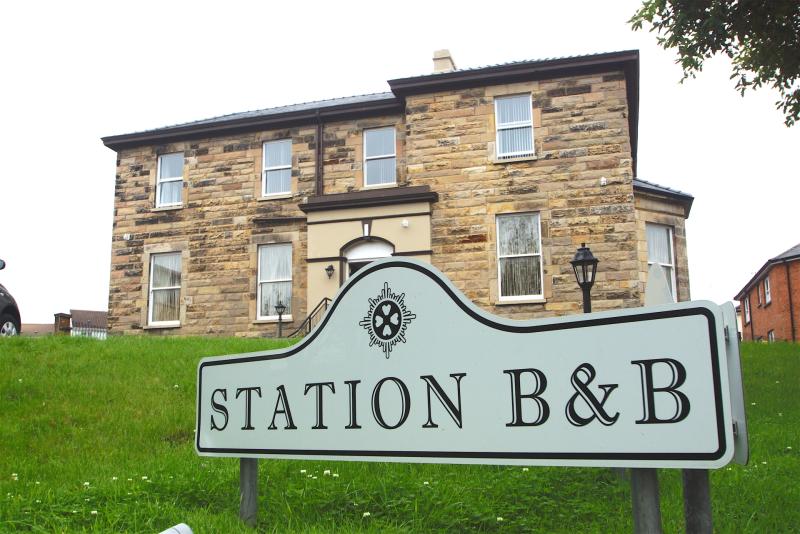 The Station B&B has welcomed 5,000 guests since it opened, according to the owners.

Councillors have overturned a recommendation to refuse planning permission for a B&B in an historic Derry building.

The Station B&B has been operating within the Grade 1 listed building at Northland Road for the last couple of years.

In that time, according to the owners, the B&B has welcomed almost 5,000 guests and is the city's top-rated tourism accommodation provider on a number of booking sites.

However, there has been an ongoing issue with planning officials over some of the work carried out on the building.

As a result, the planning department within Derry City and Strabane District Council had recommended that retrospective planning permission for the change of use of the building from rental accommodation to a B&B be refused.

However, at a meeting last week, councillors on the council's planning committee decided not to follow this recommendation, and instead voted to grant planning permission for the B&B.

Councillors described some of the concerns raised by the Historic Environment Division (HED) within the Planning Service in relation to the renovation of the building as 'petty'.

Councillors praised the owners of the B&B for the restoration work they have carried out on the building, with one councillor saying he wished more people would have the 'courage' to do something similar with other historic buildings in the city.

The Northland Road building was constructed in 1897 to be used as a dwelling by the superintendent of the nearby asylum.

The building was subsequently used as a fire station, accommodation for nurses, rental apartments and, most recently, a language school.

Speaking at the meeting last week of the local council's planning committee, a planning officer outlined some of the concerns raised by HED.

The officer said that the original application had stated that there would be no changes to the exterior of the building.

However, he said that subsequent inspections had noted some exterior changes had been made, including work on the roof.

He said that HED also believed that a waste water pipe installed above the main entrance was 'inappropriate' to the heritage of the building.

The officer said that planning officials from the council had engaged with the agent of the building's owners and HED to move this application to a 'positive conclusion'.

However, he added that the agent had not addressed the concerns raised by HED.

Speaking at the meeting on behalf of the B&B owners, Liam Walsh said the business involved three local families who had spent 20 years away from Derry working in the hospitality industry.

They had returned to Derry, Mr Walsh said, and had wanted to invest in the city.

He said that when they took on the Northland Road building, he said the property was in a derelict condition.

He said part of the car park had subsided into the basement of the building, and the property needed a new roof.

As well as a new roof, Mr Walsh said they had also replaced 26 windows in the building at a cost of £900 each.

He said he had a 'strong emotional connection' with the building, given that his father had previously been based in it when he worked for the fire service.

Mr Walsh said the owners of the Station B&B had not 'spared any expense' when restoring the building.

In relation to the concerns of HED, he said the work carried out on the roof had been necessary because of the condition of the roof and added that the work could only be seen from a height.

In relation to the waste water pipe, he said they had put forward two alternative locations for the pipe to HED but there had been, to the best of his knowledge, no feedback from them.

SDLP councillor John Boyle asked Mr Walsh if they had been 'essentially left hanging' by HED when it was HED concerns which 'effectively might hold back the business'.

Mr Walsh said that this was the current situation.

After a lengthy discussion on the matter, Cllr Boyle proposed that the recommendation to refuse planning permission for the B&B be overturned.

The proposal was put to a vote and passed unanimously.

Cllr Boyle paid tribute to the work carried out by the B&B owners.

“I wish there were others in our city and district who would actually have the courage to do what has been done with this building,” he said.

“I don't want to be offensive to any previous owner but this is an enormous improvement on what had been there before.

“I want us as a committee to send out a message to anyone that wants to be an entrepreneur that we are not going to stand in your way and we will do our best to be sympathetic to you.”

Sinn Fein councillor Christopher Jackson, the chair of the council's planning committee, also commended the work carried out on the building.

“I would agree that it is a sympathetic restoration of a listed building,” he said.

“At the same time, we do respect the input from HED.

“However, I am concerned that this is not the first time that members of this committee have had concerns around HED's impact on this council area.

“I know given the amount of historic value that we have within our city and district, I would like to think that HED would pay closer attention and visit the city and district when assessing applications.

“In this case, from what we are hearing, this application had been let down in relation to HED.

“That is a concern and it is not the first time we have heard that in this committee.”