Bernadette Radcliffe had just a one in 4,000 chance of winning the prize 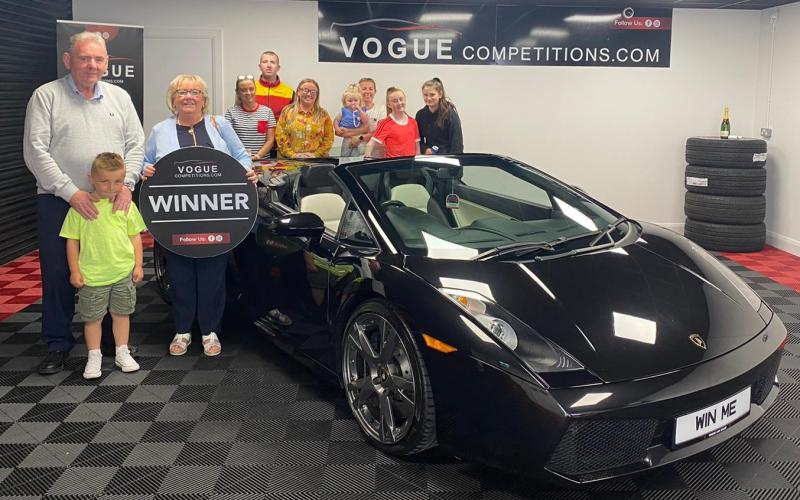 A Derry woman who cannot drive has won a dream supercar for just £12.50.

Bernadette Radcliffe, from the Brandywell, bought a ticket for a competition to win a black Lamborghini Gallardo on a whim when she saw it advertised on social media.

Mrs Radcliffe had just a one in 4,000 chance of winning the prize from Derry company Vogue Competitions

She couldn't believe her luck when she got a call from Derry singer and entertainer Micky Doherty who had picked her name out using a computerised random number generator.

Micky then paid a surprise visit to Bernadette who was celebrating with a cup of tea at her sister Siobhan's house in Galliagh Park.

"Anybody else would be drinking a bucket of vodka."

Micky said he was delighted Mrs Radcliffe had won the prize because she's a 'lovely person'.

"She's from the Lecky Road which is where my mother was from so it was very special to me.

"At first I didn't recognise her name because I would know her as Bernie, but then I realised that I know her and all her sisters for a long time.

"She's a lovely person and a real lady.

"Earlier that day Bernie was out handing out candles of Sister Clare (Crockett) and I said a wee prayer to Sr Clare before I picked the winner that I would pick the person that deserved it. She works in mysterious ways."

The Lamborghini was part of a three part prize draw that also included a Rolex watch which was won by Niall McDaid from Bishop's Street from a £10 ticket and a lawn mower which went to Patrick McDaid from Rosemount who purchased a ticket for £5.

Blaine Tierney of Vogue Competitions and Vogue Car sales in Springtown has given away a large number of cars in competitions since lockdown began in March.

"The Lamborghini is our biggest giveaway yet, it's an amazing car and it would cost £180,000 new," he said.

"It's brilliant to be able to give people life changing prizes and the majority of the prize winners have been from Derry."