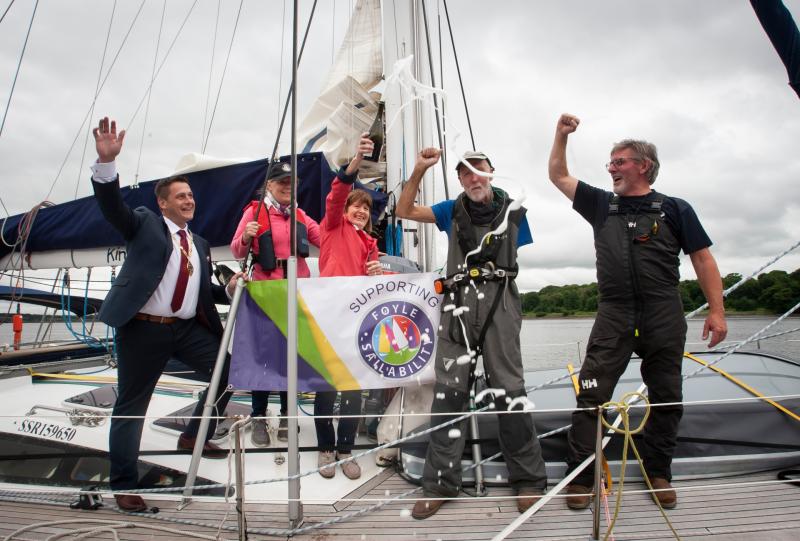 A Derry sailor finally arrived home this afternoon after an amazing journey across the Atlantic.

Garry Crothers, who is the vice-chair of Foyle Sailability, found himself thousands of miles away in the Caribbean at the start of lockdown.

With all seaports and airports closed and the hurricane season closing in, he took the difficult decision to sail solo across the Atlantic on his yacht 'Kind of Blue'.

But what makes Garry's achievement all the more incredible is that following a serious accident in October 2009, he lost the use of his left arm and, in September 2018, had the arm amputated.

With the help of family and friends, and support and encouragement from Foyle Sailability and Lough Swilly Yacht Club, he defied all the odds to get back out on the water.

Garry shared his journey online, and it came to a safe conclusion this afternoon as he sailed up the Foyle, past his home in Culmore, and reached the end point of his almost 4,000 miles of travel by tying up at the pontoon outside the council offices.

Among those there to greet him was Deputy Mayor, Alderman Graham Warke.

Alderman Warke said Garry's journey had been an incredible one to follow, and that he was delighted to be there as he stepped foot on home soil once again.

"Garry's story really is ​testament to the fact that you can achieve so much with passion, determination and belief. It is so impressive that Garry was able to sail again at all after his accident, but the fact that he has sailed solo across the Atlantic is truly inspirational.

"I know Garry is a great ambassador for encouraging people of all ages and abilities to enjoy sailing, and I think his journey will certainly inspire others to believe that they too can defy the odds.

"In a truly selfless act, Garry has used his solo trip as an opportunity to raise awareness and funds for Foyle Sailability - a local charity which promotes sailing and other water-based activities to people with disabilities.

"Since their usual fund-raising events cannot take place because of the pandemic, I would encourage anyone who can to make a donation, however small."

He continued: "It was really heart-warming to see Garry's wife Marie and his daughters Amy and Oonagh there to greet him along the Quay as he exited 'Kind of Blue' after thousands of miles of sailing.

"I'd like to wish Garry all the best, and I hope he has the chance now to put his feet up and have a rest for a little while!"