St Eugene's teaches its pupils the importance of embracing diversity 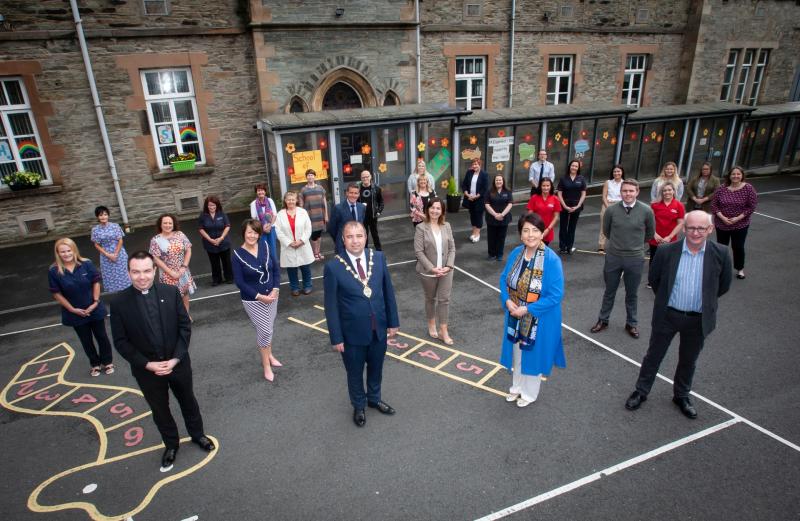 Staff at St Eugene's are congratulated on their success by Mayor Brian Tierney. Photo by Jim McCafferty Photography

A Derry school has been honoured for the work it is doing to welcome children from different cultures.

St Eugene's Primary School has pupils of different nationalities and has made significant efforts to provide a welcoming environment for those children.

The school has also taken steps to teach all its pupils about the important of embracing diversity and learning about different cultures.

As a result of its ongoing work. St Eugene's has received a 'Schools of Sanctuary' award.

A 'School of Sanctuary' is a school committed to being a safe and welcoming place for all, especially those seeking sanctuary.

This could be those whose lives were in danger in their own country, who have troubles at home or are just looking for a safe space of safety.

St Eugene's principal Teresa Duggan said they were delighted and proud to receive the award.

“With some of the current St Eugene’s pupils coming from Poland, China and Rwanda It was important that the whole school community come together in celebrating such diversity within each class.

“The children learned about different cultural backgrounds, languages and shared their experiences regarding traditions and customs and how these would be celebrated across the world.

“The programme also ensures better Child Protection and Safeguarding procedures throughout our school plus improved facilities for all children in St Eugene’s PS.”

The school received the award on Friday from Derry's Mayor Brian Tierney, himself a former pupil of St Eugene's.

“I have great memories of this school and believe it plays a central role in the local community,” said the Mayor.

“The school deserve the recognition for the hard work and dedication put in by the principal, board of governors, teachers, parents and, most importantly, the pupils.”

Official recognition of the award will take place in September at a function at Belfast City Hall.