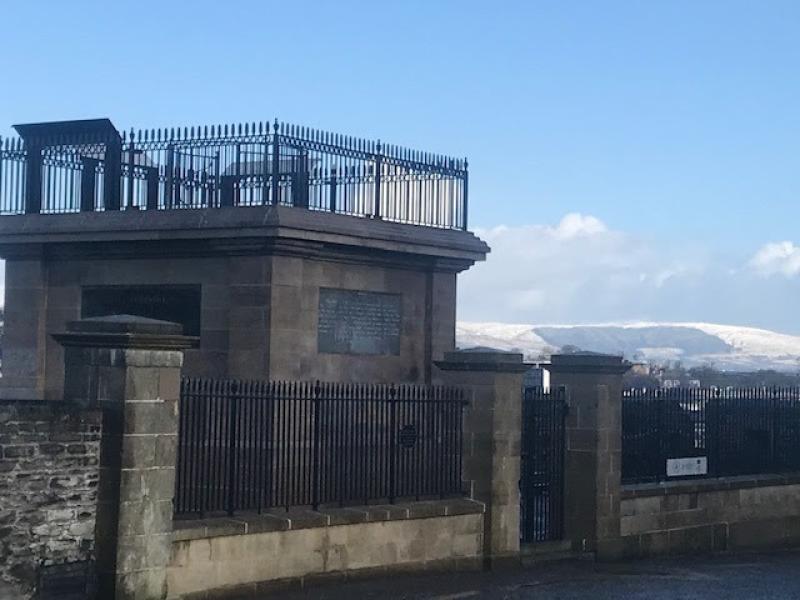 Artists have been funded for a project that will reclaim a ‘contentious’ plinth on Derry’s Walls and aim to connect communities on both sides of the River Foyle.

Void Gallery is ‘delighted’ to announce artists Alan Phelan and David Beattie as the recipients of the Plinth Commissions for 2020 and 2021.

The Walker Memorial Plinth was built in 1826 - a 25 metre high column topped by a five metre high statue of the Reverend George Walker who was Governor of the city during the siege of Derry in 1688.

The column and statue were blown up by the IRA in 1973.

The remaining plinth and its historical significance have meant it has been a contentious space in the city.

Funded by the Department of Foreign Affairs, the Plinth Commissions is a collaboration between Void Gallery, The Siege Museum and Friends of the Derry Walls.

The ambition of the commission is to reclaim the space as a public area for collaboration and collective participation.

Through an open call, artists both North and South of the border were invited to propose a project involving the community that surrounds the Plinth, creating sculptural interventions as part of the collaboration.

The first commission by Dublin-based artist Alan Phelan will launch in September 2020.

Phelan’s project is a crowd-sourced sculpture made by individual participants in isolation, then assembled together to create the final artwork.

This collective making process acknowledges and commemorates the COVID-19 crisis.

The sculpture will be of a hyacinth flower; using the red, green and blue colours with petals made in papier-mâché, based around a small similar work due to be exhibited at Void Gallery as part of Phelan’s exhibition ‘echoes are always more muted’ which launches at the same time.

Alan Phelan commented: “I am delighted to be part of the Plinth Commissions for 2020.

“My idea is to work with the community to mark this strange time we have all experienced and harness the people power of socially distanced activity to make this public sculpture.

“I look forward to working with Void Engage and bringing people together by staying apart, as they say, for this project.”

Launching in 2021, David Beattie proposes a project that will unfold as an invitation to the community to collectively examine the River Foyle as an interconnecting body of water, a richness of biodiversity, and a measure of perpetual time.

Participants will be invited to connect with the river through a series of engagements that record their experiences and allow them to rethink their relationship with the river and their natural environments.

The project will culminate in a sound recording that will be played from the Plinth and will mark the high and low tide of the river, bringing awareness of the rhythm of the river, and movement of time to people within the city.

David Beattie, who is also from Dublin, said he was delighted to be selected for this unique commission.

“It feels extra special to be supported to produce new artwork during a precarious time for artists and art workers.

“I look forward to working alongside the team at Void and the communities on both sides of the River Foyle to realise the project for the Walker Plinth.”

Void Director Mary Cremin added: “We are very excited about this public art programme that we have been developing in partnership with The Siege Museum and the Friends of the Derry Walls.

“It is a significant moment to have this plinth reclaimed as a public space when you consider how contentious public monuments and memorials are in this current moment in time,” added Ms Cremin.