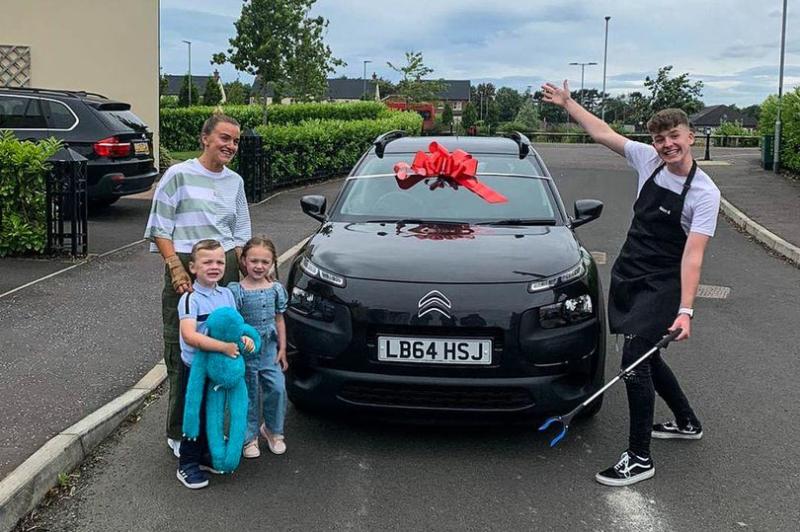 Adam B hands over the new car to Bronagh, Adam and Aoife.

Derry Youtuber Adam B surprised a heartbroken family at the weekend by giving them a new car.

Bronagh Burke and her two young children, Adam and Aoife, are still trying to come to terms with the death of her husband, Thomas, in April.

Thomas, who was only 29, died of a heart attack.

The young Creggan man was well-known and liked in local football circles through his involvement with the Trojans club.

His death caused widespread shock in the city and left his family and friends devastated.

However, Bronagh and her three-year-old twins were stunned at the weekend to get a visit from popular Youtuber Adam B.

Adam, who has almost three million followers on the online channel, handed Bronagh the keys of a brand new Citroen C4 car.

Bronagh told the Derry News that she could not believe Adam's generosity.

“It was such an amazing thing to do and we are so grateful for his kindness,” she said.

“This means so much to us.”

As well handing over the car, Adam also gave Adam and Aoife a range of toys as they prepare to celebrate their fourth birthday next Sunday.

Handing over the car was just the latest in a number of kind gestures from Adam B.

He recently bought his parents a new house, and earlier this year raised £1,400 for the local branch of the St Vincent de Paul charity by sending messages to his fans, who were asked to make a donation to the charity.

Meanwhile, a special appeal for people to send birthday cards to Adam and Aoife to cheer them up has been a huge success.

A few weeks, a family friend issued the appeal, asking for people to send cards to the twins to open on their first birthday without their daddy.

To date, more than 1,000 cards have been sent and Adam and Aoife are looking forward to their birthday celebrations next Sunday, June 28.

Anyone who would like to send the twins a card can still do so.

The address to write to is: