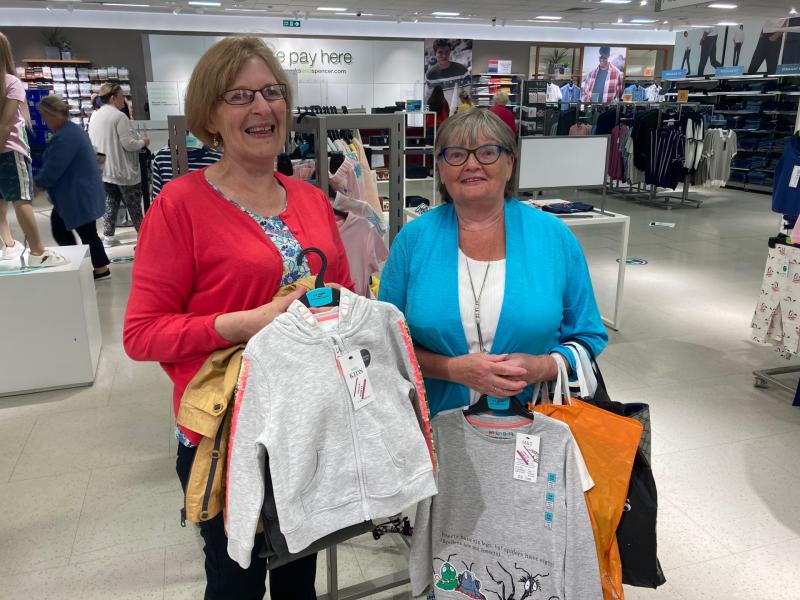 Mary McLaughlin and Geraldine Deery enjoy the opportunity to get back out shopping.

Derry's stores are opening their doors again, but shoppers will find a vastly different retail environment to the one we were familiar with before lockdown.

With hand sanitiser at the door to every store, one-way systems, contactless payment, and limits on customer numbers, the 'new normal' might take a while to get used to.

Around half the shops in Foyleside Shopping Centre were open on Tuesday morning, with Dunnes Stores attracting the biggest crowds.

Staff in Marks and Spencers and Boots, which have remained open throughout the pandemic, were glad to see a bit more hustle and bustle in the centre

And with sales on in Debenhams, Dunnes and Marks and Spencer,  many shoppers remarked on how happy they were to be out spending again.

But while the shops are open, cafes and coffee shops in the shopping centres remain closed for now.

Mary McLaughlin, who hasn't been shopping in the city centre in over three months, said she was glad to be back.

"This is my first day back up the town and I'm all hyper with it," she said.

"It's been awful not being able to get up the town, but as long as we are all healthy that's the main thing.

"It's just great to get out again.

"I've been looking forward to it."

Self-confessed 'shopaholic' Geraldine Deery has been yearning for the social side of shopping.

"I'm a shopaholic and it's been driving me crazy," she said.

"I missed going up the town and meeting people and having a chat.

"And I really miss going in for a cup of coffee with my sister.

"I've gone a bit crazy buying things, I'm making up for lost time of the 12 weeks I missed."

The management at Foyleside, The Richmond Centre and Debenhams have clearly put a lot of time and effort into establishing and marking out one-way systems and there are plenty of signs in place reminding people to keep to the two metre social distance rule.

"You do be a bit nervous because you're looking at the floor, trying to make sure you are going the right way," said Mrs McLaughlin.

"Everything is well spaced out and the floors are all marked out.

"Although I'm glad I came out early because it's quiet at the minute."

Derry's small independent retailers are also slowly getting back to business after getting the go ahead this week,

David Thomas, whose jewellery shop and workshop Thomas Goldsmith has operated from Pump Street for over 25 years, has been surprised that some of  his fellow small traders haven't reopned yet. 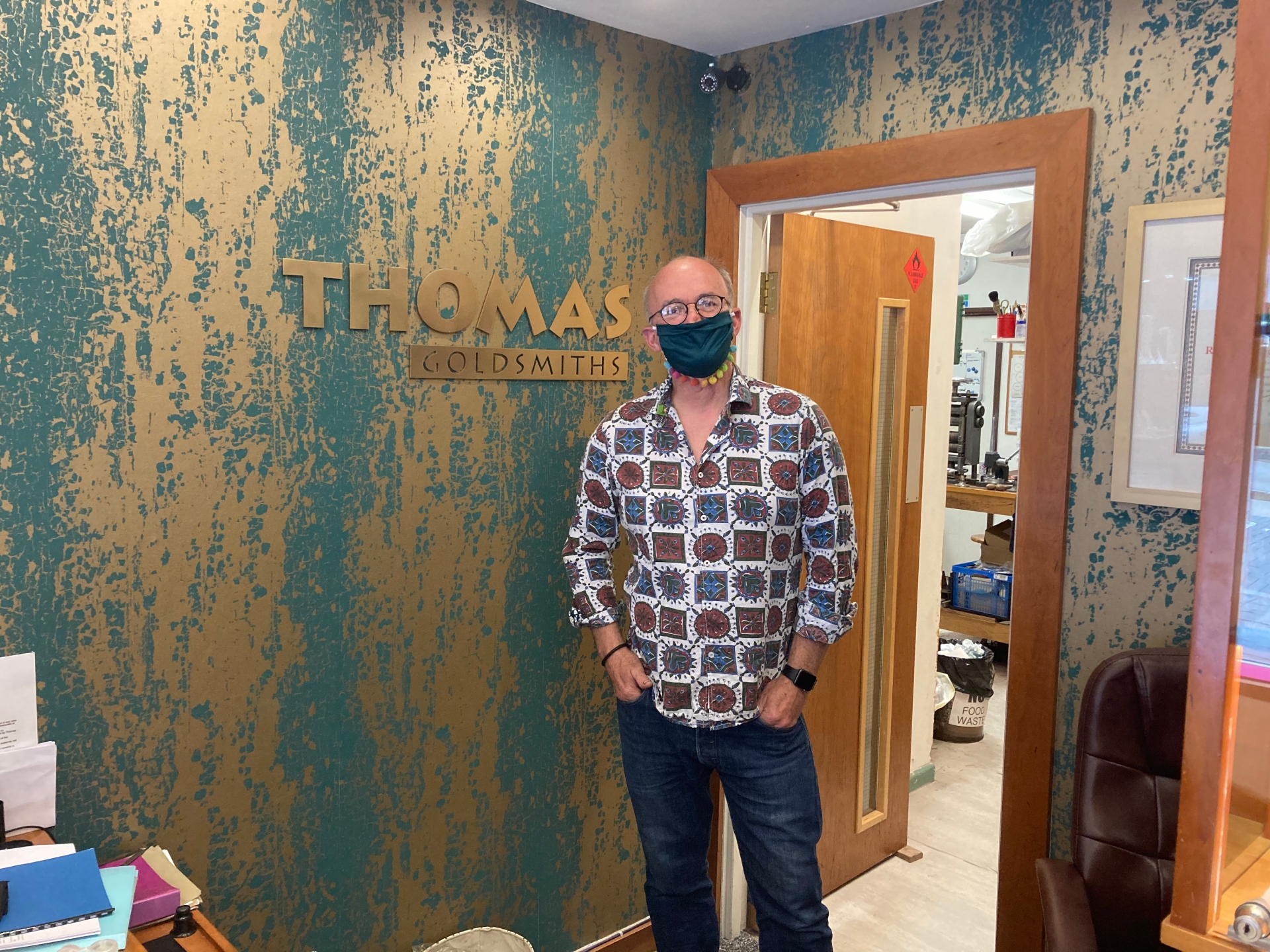 "I've just been for a walk round and I've noticed that a large number of small independents aren't open at the minute.

"This is the second day into it and they are taking their time to get back to work. Maybe that's their own choice.

"It surprised me because to rebuild business again is important.

"For a lot of them who have furloughed staff and who are self employed as it were and are receiving payments they are thinking 'I won't risk it' because there's a safety net there.

"But obviously that safety net is going to start disappearing."

Business has been quite slow this week, but Mr Thomas is hopeful that shoppers will be back.

"And then we were hit by problems in the supply chain but that has started to ease up.

"In  the last two weeks it has relaxed and things are filtering though now.

"We're now able to complete things we should have done in March so we've still got that momentum from then, but in terms of work coming through it's going to be a bit slow.

"There are a lot of people are being made redundant or who haven't been able to claim grants and things like that.

"But on the other hand there are people who were furloughed and had to stay at home and weren't able to spend money and they should have a fairly healthy bank account and they are desperate to get out and buy stuff."

Mr Thomas has made changes to the way the shop operates in order to comply with the new regulations.

Only one customer is admitted at a time, staff are using face masks and hand sanitiser, and jewellery that has been tried on is being cleaned before it goes back on th shelf.

He feels that lockdown has given people time to reflect on their work/life balance and lifestyle.

"People are saying it will never be the same," he said.

"We were all chasing our tails a bit, working very hard.

"Can we take things a bit easier?

"Do we have to be rushing off to Portugal on cheap flights?

"It has been strange to sit at home in the garden and look up and see the skies totally clear."

Many of Derry's charity shops have also reopened their doors, with Oxfam, Kinship Care, the Red Cross and Cancer Focus back in business earlier this week.

However, the three month closure has meant some stores are struggling with low stock levels.

Deborah Tracey is the manager at Cancer Focus on Shipquay Street, which opened in May 2019. The shop reopened last Friday after a week of cleaning and preparation and have been busy ever since.

Inside there is hand sanitiser at the door and a one-way system in place.

"Most people have been using the hand sanitiser before they come in," said Ms Tracey.

"We have been busy with people bringing stuff in and buying stuff too.

"People seem to feel confident coming out to shop now and they are glad to get back to a bit of normality."

Cancer Focus has a manager and deputy manager but all the other staff are volunteers.

"Some of our volunteers have been worried about coming back because they are older and more at risk," said MsTracy.

"So we are looking for new volunteers now. We provide everyone with shields, masks and gloves for their safety."

Cancer Focus has also launched an appeal for donations.

"Any donations to the shop must be quarantined for 72 hours when we receive them," said Ms Tracy.

"We are looking for donations of clothes, bric-a-brac, shoes, bags and books."

If you would like to make a donation to Cancer Focus or to enquire about becoming a volunteer telephone 02897568144.