Young people urged to get involved instead of wrecking. 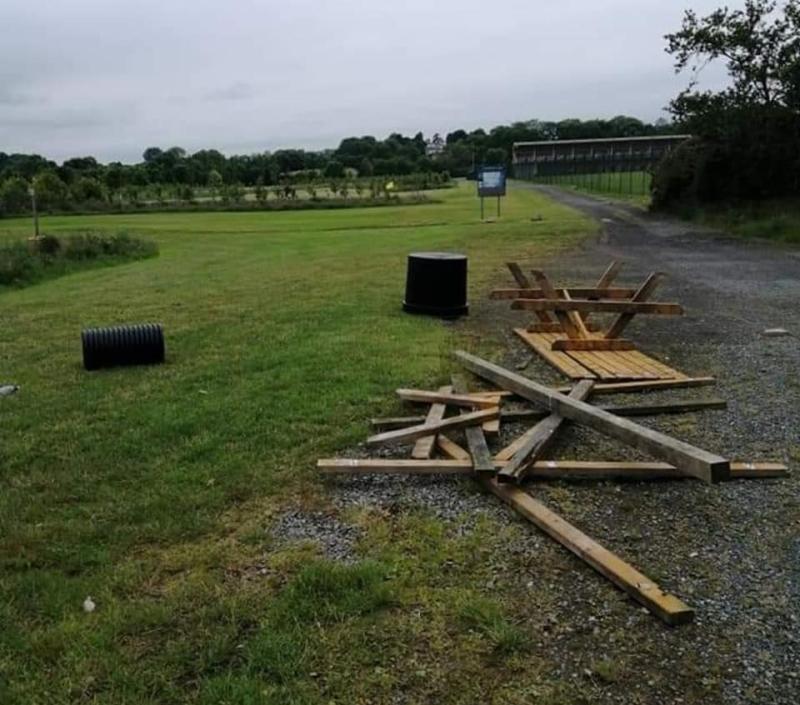 Some of the damage done to Moyola Angling Association's premises.

Members of a County Derry angling association have been left ‘frustrated’ after their facilities were vandalised following anti-social behaviour in the area.

The damage at Moyola Angling Association’s site at Bradley’s Lake in Tobermore was discovered on Sunday, but is thought to have occurred over the previous weekend.

Club secretary Seamus Donnelly said anti-social behaviour at the club’s facilities had been a problem before.

“It’s not the first time it has happened,” he told the County Derry Post.

“We invite the community to come along to an open day every year and bring their children to give them their first taste of fishing.

“Last year we had set up on the Friday night and when we went down on Saturday, the tables and chairs had been thrown around and there were pizza boxes lying everywhere.

“Nothing had been damaged then, but this time round they have damaged the place. It’s anti-social behaviour, people are treating it as a party spot.”

A picnic table was destroyed in the incident, while damage was also caused to a Perspex lean-to that was attached to the main building.

Vandals also pulled up a hedge that had been planted by the club and a fence has also been broken in two places.

“It’s very frustrating. Why target an angling club? It’s for all the community, it’s for everybody,” said Seamus.

“Some of the people who did this might have been at our open day as it’s been going since 2007. Maybe young people have nowhere else to go and they’ve taken that frustration out here.”

“I condemn this despicable act on a very inclusive club,” he said.

“I attended a school’s competition there where they were encouraging young people to take up the sport and to see these wanton acts of vandalism is despicable.

“The club is community-based and this damage is an attack on the whole community.”

The club are hopeful that CCTV from a nearby driving range may be used to identify those responsible for the damage, but are keen to educate rather than punish.

“We want to show people what has happened and appeal to them to get behind us rather than working against us,” said Seamus.

“If the young ones are drinking or whatever, we’d rather they came down and learned how to fish and be part of the club.

“We’re a strong, cross-community club and things like this can feel like a dig in the ribs.”