SAVILLE REPORT - 10 YEARS ON: The day the sun shone for the victims of Bloody Sunday 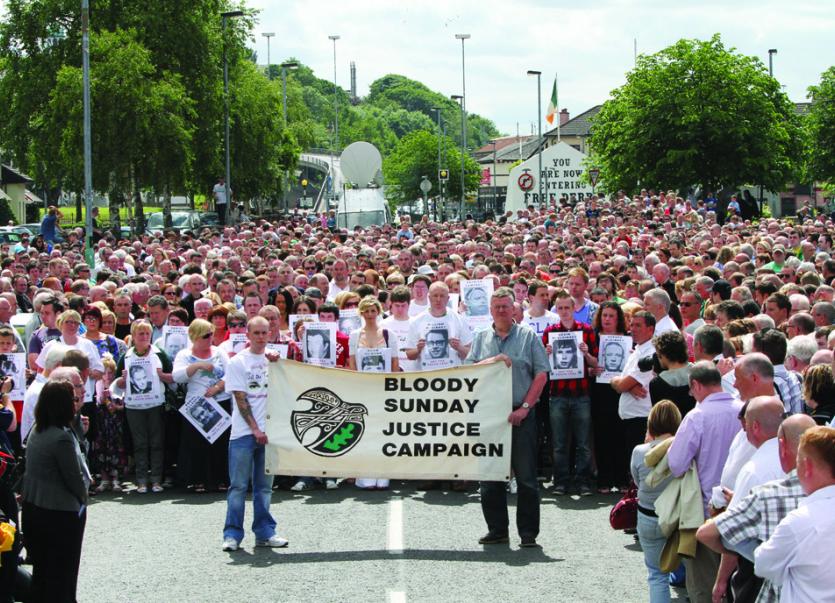 People make their way from the Bogside to the Guildhall Square ten years ago.

Ten years on from the publication of the Saville report and David Cameron's apology, two women whose brothers were murdered on Bloody Sunday have recalled that historic day.

Jean Hegarty's 17-year-old brother Kevin McElhinney was shot dead as he crawled to safety near the entrance to the Rossvile Street flats.

Kay Duddy's  brother Jackie Duddy, who was also 17, was shot as he ran from soldiers in the car park of the same building.

On this day 10 years ago, June 15, 2010, the women stood on the steps of the Guildhall in front of thousands of people and TV cameras from around the world and spoke about their beloved brothers, who had been totally exonerated by Lord Saville's report.

At 10am that morning two family members of each Bloody Sunday victim were allowed into the Guildhall to read the report in full.

Legal teams acting for the families had been permitted to view it four hours earlier and were able to guide them through the findings.

Mrs Hegarty remembers the 'huge elation' after reading the report but this was quickly followed by the horrible disappointment that Lord Saville found Bloody Sunday victim Gerald Donaghey, 17, was 'probably carrying nail bombs in his pocket', something his family have always refuted.

"That was like a punch in the gut," said Mrs Hegarty.

"The Donaghey family was very, very upset and the day was tinged by it.

"It brought us back down to earth really quickly.

"I was really angry. Why did he say 'probably'?

"He could just have said that they couldn't decide.

"His choice of words was so hurtful."

Mrs Hegarty said she is disappointed charges have not been brought over the 12 other murders.

"It's a bit of a sad milestone because we are 10 years on and nothing really has changed," she said.

"How much further forward are we really?

"All the death and injuries that were suffered and just one soldier is facing prosecution. It beggars belief."

In a televised speech to MPs in the House of Commons that was broadcast live to the Guildhall Square that day, Prime Minister David Cameron said "There is no doubt, there is nothing equivocal, there are no ambiguities. 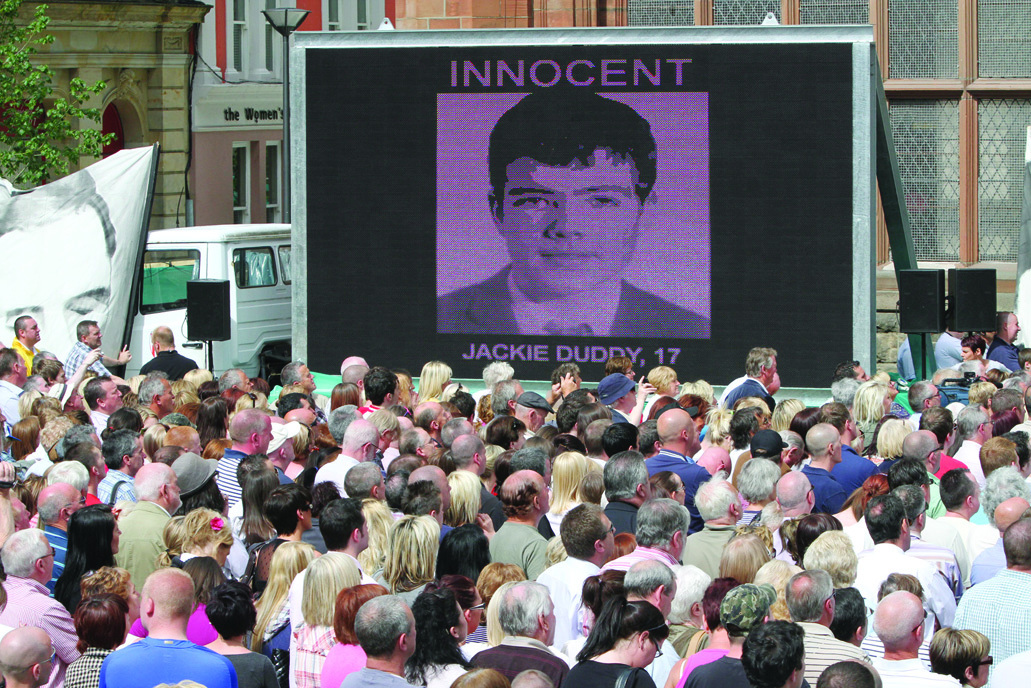 "What happened on Bloody Sunday was both unjustified and unjustifiable. It was wrong."

"My chin just hit the floor.

"He apologised and he did come across like he meant it.

He was the last surviving parent of a Bloody Sunday victim and died the following year.

"My father was a bit nonplussed to be honest," said Mrs Hegarty.

Derry novelist and dramatist Dave Duggan had been asked  to help the families coordinate their public response to the findings of the Saville Report.

He had a long working history with them and had written a play about the Saville Inquiry called 'Scenes From an Inquiry' which has been digitally recorded for the Bloody Sunday Trust to mark the 10th anniversary of the publication of the Saville Report.

"I had a very good relationship with them all," he recalled.

"I found them all to be very fine people who were very politically aware and justice aware, but also very funny and generous.

"That generosity was a human characteristic of them all."

It was agreed that a representative of each of the Bloody Sunday families would speak on the steps of the Guildhall, following David Cameron's speech.

Mr Duggan suggested they use theatrical device called a litany, where every family would say their loved one's name and repeat that they were innocent.

Before the families stepped outside the Guildhall and into the glare of world's media, Mr Duggan gave them some final directions.

"I told them to keep it together and reminded them that millions of people would be watching this and that their grandchildren and great grandchildren would watch it some day," he said.

The family members stood in an arc and gave forward in groups of two to speak about their loved one.

Mrs Hegarty, who had bought a copy of the Widgery report years before, had planned to place it on a set of old fashioned weighing scales, with the Saville report on the other side, but her plans changed at the last minute. 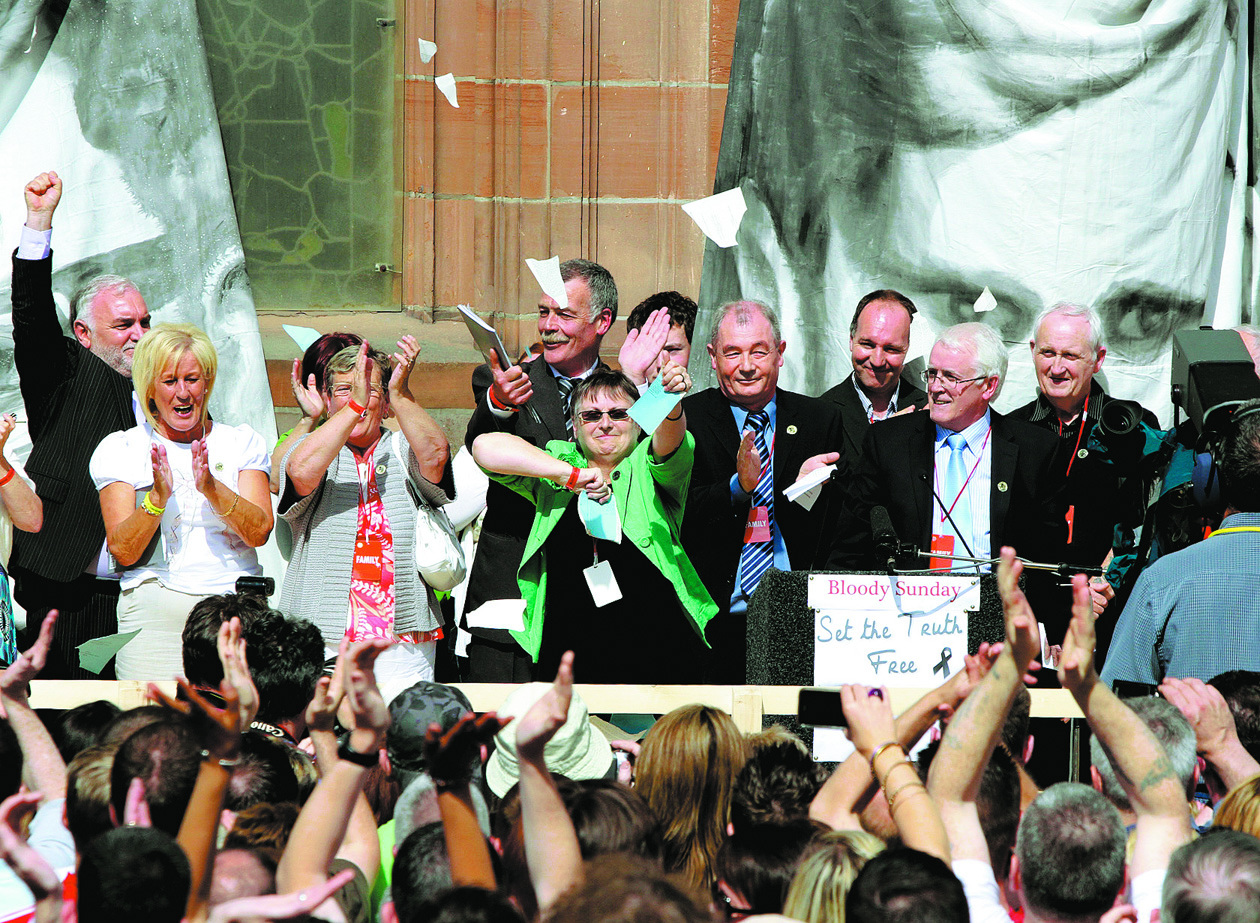 "My weighing scales were in my car, which was in Glenfada Park," she recalled.

"It just came to me 'will I rip this [The Widgery Report] up?' she said.

The photographs of Mrs Hegarty tearing the report were to become one of the most iconic images of the day.

"It was a charged gesture," said Mr Duggan. "So theatrical and powerful."

"I remember sitting in Tinney's Bar afterwards and I said to my friend 'that is the best piece of theatre I have ever made' and he said 'But you've been nominated for an Oscar?' and I said 'that was a 107million times better'.”

Kay Duddy read out her family's statement while clutching the handkerchief  that was waved by Bishop Daly as he tried to clear a path for her dying brother as he was carried through the streets of the Bogside.

"After the report was announced we met Bishop Daly and that was so special to us," she said. 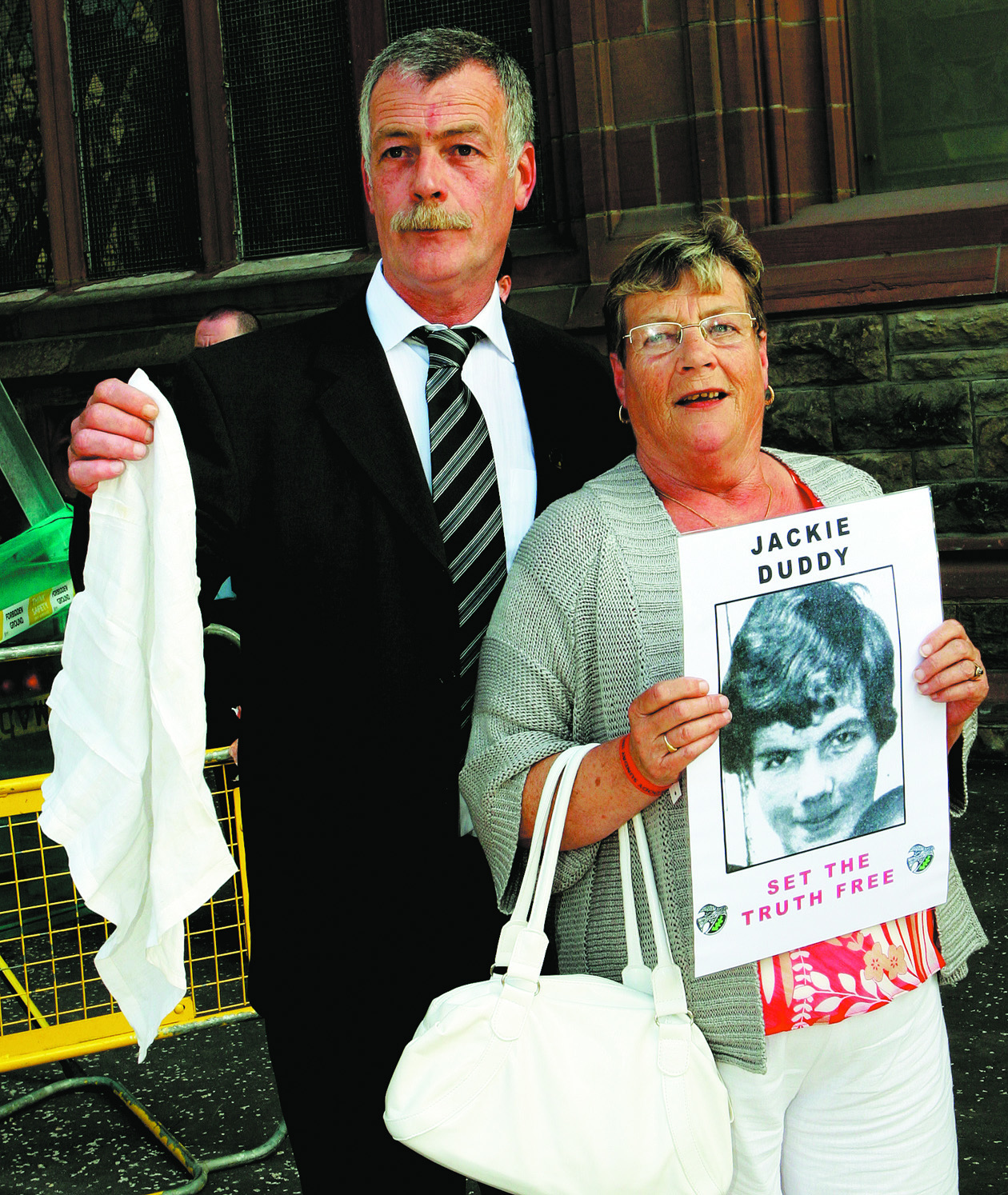 "It was a relief to him that Jackie's name had been cleared because he said all along that he was innocent.

"It's hard to believe that was 10 years ago because it has gone by in the blink of an eye.

"It was a very surreal day. It was one of those days where you just remember bits of it because a lot of it went over your head.

"A few days later I was flicking channels on the TV and David Cameron came on speaking in parliament about it and I just sat and cried like a baby."

Ms Duddy remembers the day the report was published was very sunny and said it felt like the sun was shining for the victims of Bloody Sunday and their loved ones.

"It felt like the sun was shining for us and that a big black cloud had been lifted from the families.

"It was nearly like a big blackcloud had been hanging over the whole city.

"The sad thing was that there is still a cloud over young Gerald Donaghey.

"If you read what Widgery said and what Saville said about him the two statements are almost the same verbatim, and it was so disappointing.

"His sister Mary was battling cancer at that time and she had fought her whole life to clear his name.

"They couldn't share in the enjoyment because there was still a cloud hanging over him."

Like Jean Hegarty, Kay Duddy feels her family has been let down by the justice system because no one is facing prosecution for her brother's murder.

"It has been very disappointing for most of the families, but we are very happy for the families that have got prosecutions.

"I hope and pray for those families that their journey doesn't go on too long."