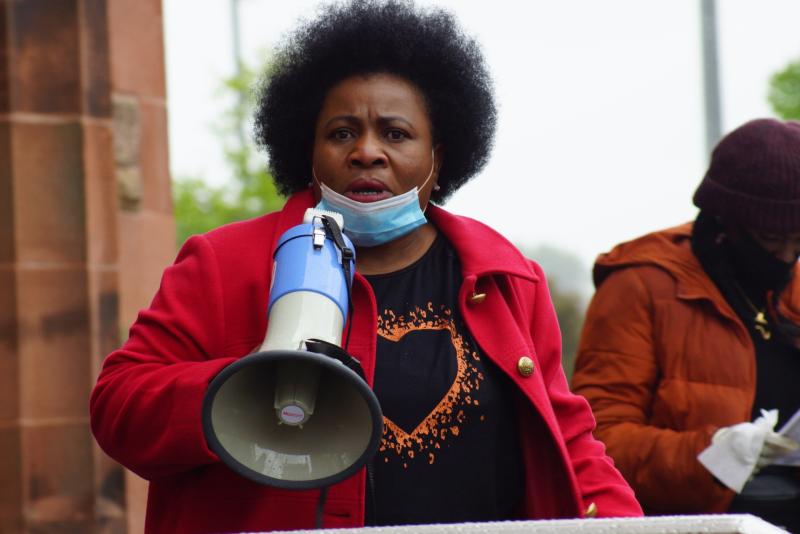 A nurse who has lived in Derry for fifteen years has shared her family’s experience of racism in the city.

Beverly Simpson moved from Guyana in South America to Derry in 2005 to help the ‘failing health system’.

She has two sons and a daughter, who was born in Derry.

Mrs Simpson was one of the speakers at the Black Lives Matter rally on Saturday in Derry's Guildhall Square.

Speaking to the Derry News this week, Beverly said she felt compelled to speak at the event as people from Black, Asian and Minority Ethnic (BAME) communities need a ‘safe outlet to express their feelings’.

In relation to opposition to the rally taking place, she believes that certain political parties mobilised the PSNI and in doing so ‘aggravated the situation’.

Mrs Simpson said she and her daughter Jada were approached by police before reaching the Guildhall and again by three officers while standing there.

“The police were intimidating us," she said.  "It was a safe space, controlled, we had a voice.

“I thought, did police officers just see the colour of my skin and approach me.

“They weren’t approaching everyone. Like every organisation there’s an element that think they’re superior.

“The rally wasn’t even started when we were approached and they didn’t give us the option of going home.

“They annoyed us that much it made us more determined to stay.”

She added: “They were trying to put a lid on an active volcano, it will still erupt, but instead of erupting in a controlled manner it will erupt all over the place.

“Let it be addressed in a controlled environment, in schools or in church.

“People should be able to speak about racism, it’s not going away no matter how many lids are put on it.”

Since moving to the city, Mrs Simpson claimed that her entire family have been subjected to racism.

“All three of my children have experienced racism, including my 11-year-old,” she said.

“In Derry it may be subtle, not open or staring you in the face, but it’s there and unless we actually speak about it, people get away with it and continue to do it.

“It’s about people’s moral compass, your ethics and what you value.

“Children are born innocent and unless you teach them to hate, and teach them racism, they don’t see the person as another colour.

“It is something that is learnt and unless we address our own personal prejudices we’ll get nowhere.”

Of those, 97 occurred in the Derry and Strabane policing district, an increase of 13 on the previous year.

For Mrs Simpson’s daughter Jada, race was never an issue until two years ago.

Mrs Simpson said her friends at school are all white and ‘she never saw herself as different’.

However, an incident in 2018 changed her attitude.

“She was at the bus station trying to board a bus when the driver shut the door in her face and drove off, leaving her standing there.”

Mrs Simpson said that after viewing footage of the incident, the company apologised and the driver was said to have been disciplined.

She continued: “It’s there, and unless each company can do like the bus company, address the individual who is the rotten egg instead of hiding it, and condoning it or trying to cover it up. Address it openly.”

Following the incident, the family felt that somebody had listened to them, but Mrs Simpson said a lot of people are afraid to speak out.

Confirming the incident, a Translink spokesperson stated: “A complaint was received on 13th September 2018 at Foyle Street bus station.

“This was acknowledged, investigated and followed up.

“Translink’s Dignity at Work policy, in which all staff are trained on their induction, makes it clear that we are fully committed to creating a harmonious working environment in which all employees are treated with respect and dignity, regardless of race, colour, ethnic or national origins.

“This equally applies to how our staff are expected to treat passengers.”

In response to criticism that now is not the right time to hold protests, Mrs Simpson said: “Coronavirus is affecting everyone. It’s affecting the Black, Asian and ethnic minority community more.

“We’re being marginalised anyway, we’re being segregated anyway, whether by a natural cause or a man-made cause so give us a chance to speak in a safe space.”

The level of support on Saturday surprised Mrs Simpson and she said she was ‘proud’ that people ‘challenged themselves’ by turning out.