Residents angry at how local council has handled the situation 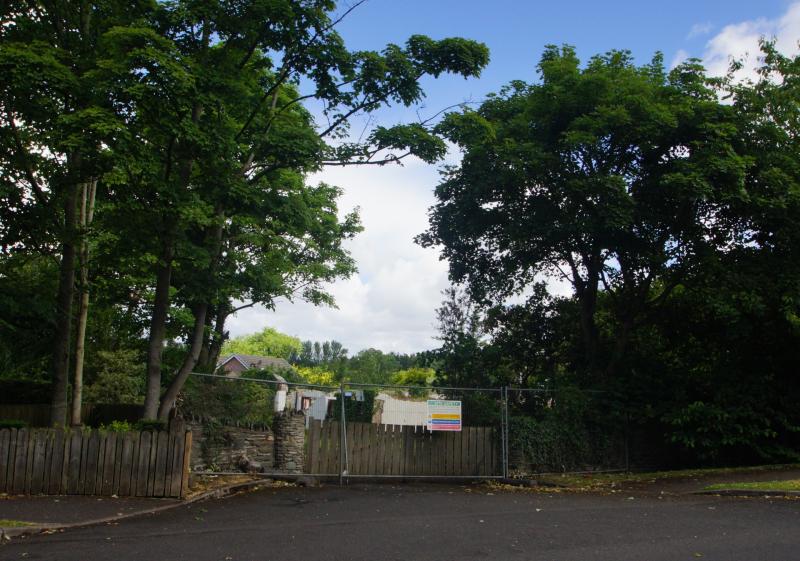 The site at Clooney Road where the trees were cut down.

The Northern Ireland Environment Agency is to investigate whether a 'wildlife crime' was committed when trees were recently cut down at a site in Derry.

The trees were chopped down last month at a site in the Waterside where the owner is currently seeking planning permission to build a number of properties.

Local residents who are opposed to the development plans have accused Derry City and Strabane District Council's planning department of 'negligence' in not providing more protection for the trees on the land.

The residents say the developer gave assurances that the trees on the land would be protected.

However, the residents claim that 15 trees on the site have been cut down in the past year.

The plans for the site, which is located at 12 Clooney Road on a plot between Waterfoot Park and the Waterfoot Hotel, were first submitted to the council's planning department in 2018.

The original proposal was to build six houses and six apartments on the land.

A number of residents in the surrounding area lodged objections to the plans.

The residents employed a planning consultant who requested that the council place a Tree Preservation Order on the trees on the site.

However, no such order was made.

A number of trees were cut down at the site in July and November of last year.

Also in November last year, a report by one of the council's planning officers recommended that the planning application for the properties on the land be refused.

And, also in November 2019, the owner submitted a new proposal seeking planning permission to build six houses on the land, instead of the houses and the apartments.

No decision has yet been made on the current application.

However, residents are angry at how their concerns have been treated by the local council.

A spokesperson for the Waterfoot Park Residents Objectors Committee said the latest felling of trees took place on May 27 last when five trees at the entrance of the site were removed.

“We as residents are furious and disgusted by what we perceive as negligence by the council in protecting the stunning trees, vegetation and wildlife on this site,” the spokesperson said.

“No due diligence of care has been shown at any stage in relation to the site or the repeated concerns of the reidents.”

In response, a council spokesperson said they took their obligations in these matters seriously.

“Following a request from objectors in 2018, the council gave consideration to serving a provisional Tree Preservation Order (TPO) on the site,” the spokesperson said.

“The trees were visited and assessed against the TPO criteria; however, it was concluded that it would not be appropriate to serve a TPO on these trees, taking account of their limitations in terms of their type, size, condition and public amenity value.”

In connection with the latest planning application at the Waterside site, the Northern Ireland Environment Agency (NIEA) submitted a consultation document in January of this year.

Within the document, the NIEA stated no trees on the site should be removed from March to August of this year unless a 'competent ecologist' had undertaken a detailed check for 'active bird’s nests' and provided written confirmation that no nests would be harmed.

The NIEA said that any such written confirmation should be submitted to the council's planning department within '6 weeks of works commencing'.

When asked by the Derry News if the council had been contacted in advance of the trees being removed last month, a council spokesperson said: “There is no requirement on the site owner applicant to notify the council of its intention to remove any of these trees, so none has been received.

“The council is aware that tree-felling activity has occurred recently on the site and the Northern Ireland Environment Agency has been made aware and will be investigating if wildlife crime has taken place.”

The council spokesperson concluded: “The council takes its obligations in respect of these matters seriously and has undertaken an appropriate course of action to ensure that the opinions of residents are and will be fully considered in the processing of the planning application.”

The Derry News contacted the owner of the site but they did not make any comment on the matter.