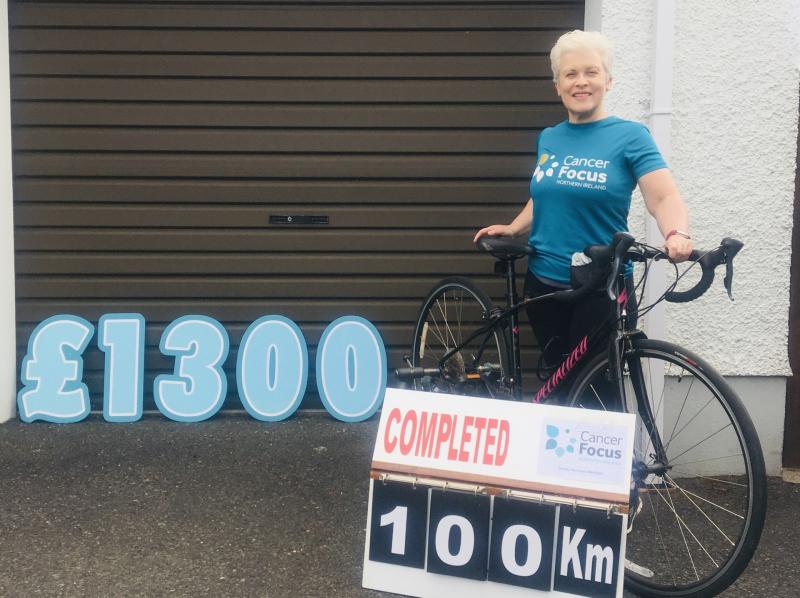 A woman who embarked on a 100km static cycle in her garage at the weekend has praised the generosity of all those who donated.

Emma McCann, from Moneymore, raised over £1,300 for Cancer Focus NI after taking on the mammoth task and said she was ‘humbled’ by the donations.

“People stepped up to the mark and the live feed on Facebook really made a difference. I could see when the donations were coming through,” she told the County Derry Post.

“I just didn’t know what way it was going to go. The majority of people are furloughed from their work, they’re worried about their jobs.

“They don’t have an awful lot of money and there’s a huge amount of worthy events and challenges going on at the minute.

“There were even a few others locally that day, and people only have a certain amount of money to give but they were fantastic.”

As well as being thrilled with the amount of money raised for the charity, Emma says the support she received from friends, family and neighbours.

A small crowd had gathered as she reached the last leg of her challenge, something she says took her by surprise.

“I knew nothing about that! I just thought with what had been going on that I was on my own, just me, John and the dog,” said Emma.

“I couldn’t get over that my friends all decided to come and support me. I needed it. They all arrived during the last 10km or thereabouts.

Emma had set herself a target of 5 hours for the 100km cycle, but, spurred on by the support, and a healthy competitive instinct, he managed to beat her target.

“I had given myself five hours and was absolutely chuffed to have been able to do it in four hours, twenty minutes and thirty-three seconds,” she said.

“I was tootling along at an average of about 22-24km per hour but I’m actually quite competitive.

“I looked at the stopwatch and thought, ‘I can do this in about 4:20 or so’ and I pushed it hard the last 5km and I got there.”

Donations for the challenge can still be made by visiting Emma’s Just Giving page at Emma’s Lockdown Cycle 100km.