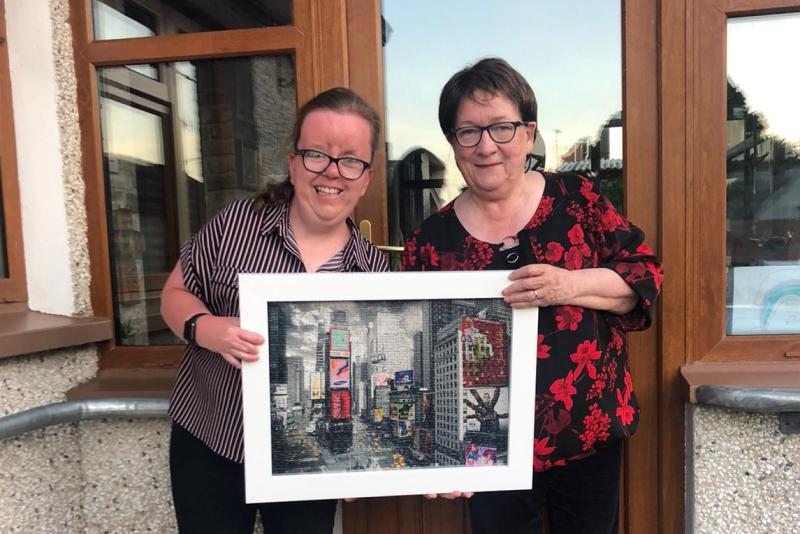 Angela handing over her piece to the raffle winner.

A County Derry woman has raised over £4,000 for a cancer charity by raffling a framed jigsaw that she completed at home during lockdown.

Angela Kirkpatrick, who has Apert Syndrome, set about the task after she was challenged by Declan Kearney and his family, who she has lived with since her mother, Alice, died in 2016.

“Lockdown has made things more difficult for Angela,” explained Declan.

“She is all about routine, so Michelle ordered a 500-piece jigsaw of Times Square off the internet to keep her occupied.

“A few days went by and she only had fifteen pieces built, and she was getting a bit frustrated, so I said to her, ‘see if you can get that jigsaw finished, we’re going to raffle it.’

“She spent seven or eight hours a day, for two weeks at that jigsaw. She did every bit herself and when it was finished, I got my da to frame it and put glass on the front.”

Angela wanted to donate any money raised from the raffle to Marie Curie, in memory of her mother, and the prize was won by Emma, Mary and Stephen McAllister, from her hometown of Swatragh.

“When I said about raffling it, she had asked if we could do it for Marie Curie, so she put it up on Facebook at £20 a ticket on the Saturday night at 10 o’clock,” said Declan.

“The following Sunday then, we did the draw and we raised £4,260 altogether. We went up and presented the cheque to Marie Curie.”