Bateson looks back on a ‘baptism of fire’

The Kilrea man passed over the Causeway mayoral chain on Monday night. 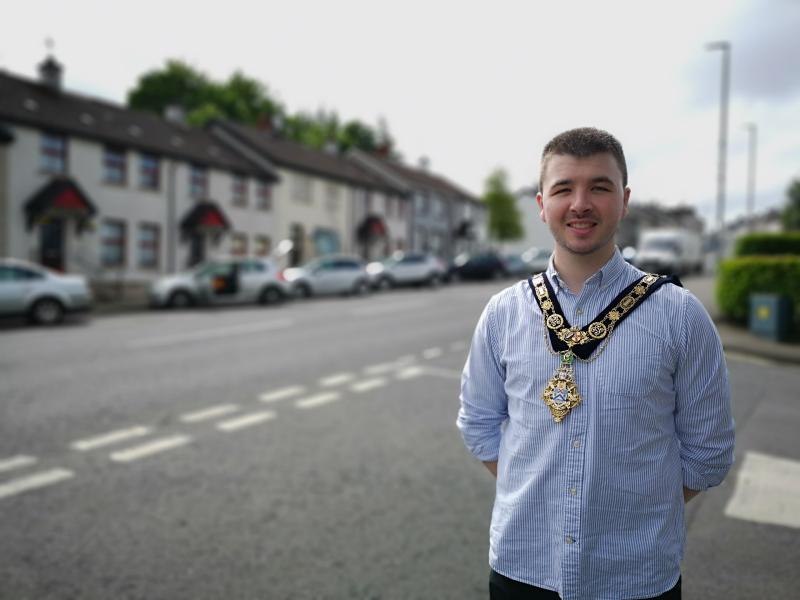 Outgoing mayor of Causeway Coast and Glens Borough Council, Sean Bateson, has described his year in office as a lasting experience.

The Kilrea man was a surprise choice for the role last May. He became the council’s youngest mayor as Sinn Féin held on to the role in consecutive years for the first time.

Going into the 2019 AGM as a newly-elected councillor, the 27-year-old did not anticipate walking out with the mayor’s chain.

“With the DUP being the largest party, they had first pick of the year they wanted as mayor,” he told the County Derry Post.

“We thought they would pick the first year with the golf and everything, but on the night of the AGM they came back [with 2020-21].

“We had the next choice and the idea of holding the mayor’s position two years in a row was historically significant for Sinn Féin, so we decided we would take it.

“The next thing, they all started nominating me! I was a bit taken aback and I had to make a few phone calls and think about it. The AGM went on a bit longer than they had anticipated!” 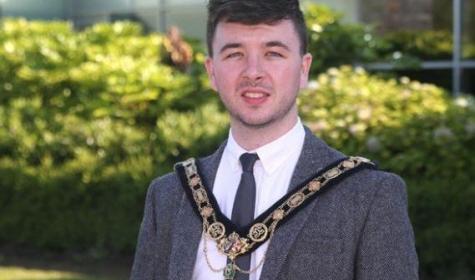 Cllr Bateson’s year in office has been one of the council’s busiest and most tumultuous to date.

Beginning with the 148th Open golf championship at Royal Portrush and ending in the midst of the Covid-19 pandemic, the year also saw the council dogged by financial crisis.

Sean says the issue of finance came to a head following a few years of false economy.

“Unfortunately, for a number of years, the rate was kept at probably too low a percentage with the cost of services increasing every year,” he said.

“It’s probably not finished just yet, and it will take its toll for a while, but hopefully we’re on the road to getting out of it.

“I was first elected last May and I was nominated for mayor and put right into the financial situation and into the pandemic, so it’s been a baptism of fire.

“As the figurehead of the council, I just had to manage it and engage with councillors and officials as best as possible to try and get out of it.”

Constitutionally, the council is a divided one and nationalist and unionist councillors have clashed on various issues, but the outgoing mayor says there is a sense of unity around the more important issues.

“The council mirrors the political make-up of the north. Unionism, between the DUP and UUP, holds the majority of seats,” said Sean.

“Sometimes there are decisions made that, from a nationalist, left-wing perspective, you’re dead against, but because they hold the numbers, that’s democracy.

“We do our part as a Sinn Féin group to look out for local communities and be as progressive as possible, but it’s like any council in any political set-up, there will be differences of opinion.

“Whenever it comes to uniting behind bigger pictures and bigger things, there is a togetherness and I think the Covid-19 pandemic has highlighted that.

“Every councillor in their own local area is doing good stuff, that’s not unique to any political party.” 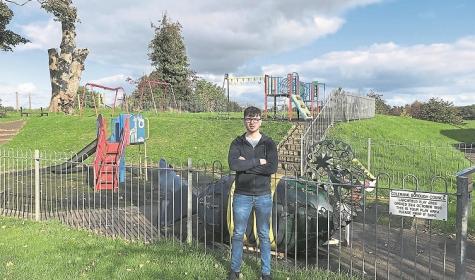 The council area has a population of over 144,000 and stretches from Glenariffe on the east coast to Greysteel and encompasses large swathes of counties Antrim and Derry.

Its sheer size makes the role of mayor a busy one.

“My wee car has definitely taken a battering – I wouldn’t like to think of the total amount of miles it’s done,” said Sean.

“It’s not an ordinary nine to five job with a set routine, every day is different. One day you’re in Glenariffe and the next day you could be in Limavady.

“I’ve tried to stretch myself across that area, meeting people in between and tried to be as fair, balanced and progressive as possible and bring passion and energy to the role.”

Covid-19 restrictions have seen the council adapt through necessity, recently conducting virtual meetings. It is something the outgoing mayor feels could be continued post-pandemic.

“We tried it out maybe four weeks ago, and it didn’t go too badly. There were a few technical hiccups because it was quite new to all councillors,” he said.

“Obviously, when councillors are in the chamber, they have to abide by standing orders anyway, so when they are online it’s the same.

“Talking to a few councillors and officers, they thought it would be difficult to do an online meeting, but it has gone quite well.

“Councillors are going to have to adapt for the foreseeable future, but it might be something in the long run, particularly for councillors that have young families, or who work during the day.”

The pandemic brought a premature end to some planned initiatives around global climate change and LGBT awareness, but Sean looks back on his year in office with some pride.

“As a proud Kilrea man, it was humbling and overwhelming to get endorsed last year and be elected for this area, so I wanted to focus on my local area,” he said.

“It was good to highlight Kilrea along with Ballerin and Glenullin as well, which maybe didn’t get as much of a focus before.

“Getting to turn on the Christmas lights here in Kilrea was great, but it’s hard to look past the Open golf. The golf was incredible and to top it off, you had an Irish winner in Shane Lowry.

“There will be many more mayor’s years, but it’s not every year where your council will get to host the biggest sporting tournament in Ireland.” 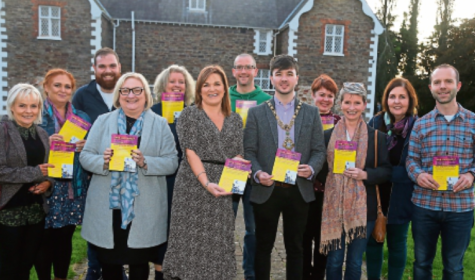 Bateson is looking forward to going back into the chamber as a councillor after a year in which he feels he put his own stamp on the role of mayor.

“When I went into the role, I said I was going to throw myself into it and that’s what I did,” he said.

“I said I was going to engage with as many community groups and organisations as possible across the political spectrum.

“I’m not your typical mayor. I’m a young fella and I think I tried to portray that as much as possible.

“I haven’t tried to portray myself as being above anybody, I’ve tried to keep my ordinary personality at the forefront.

“It’s an experience that will stand with me the rest of my life. I’ll go on to do many other things, but nothing will be quite as unique as the year as mayor.”