Event held this afternoon in the Guildhall Square 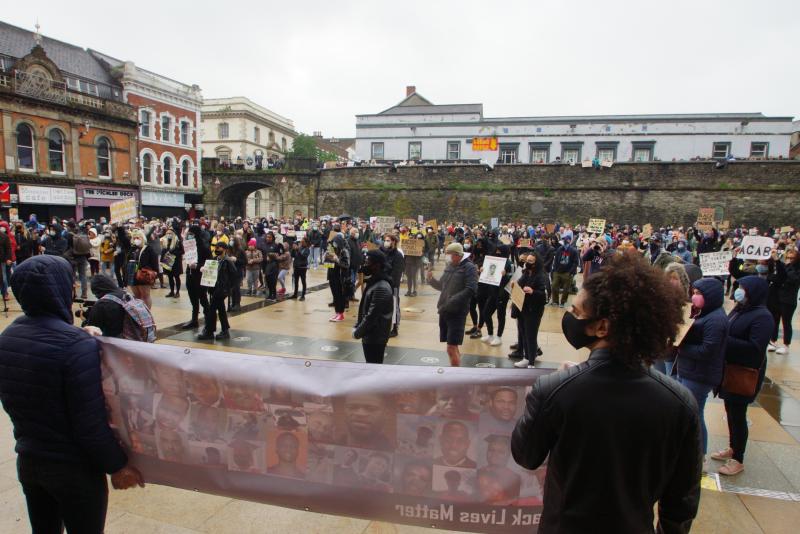 Some of the crowd who gathered at Guildhall Square today.

Police say they will be reporting the organisers of a rally in Derry today to the Public Prosecution Service with a view to prosecution.

A large crowd gathered in the Guildhall Square this afternoon for a protest in support of the 'Black Lives Matter' campaign.

The event went ahead despite appeals from the police, politicians and business leaders for it to be called off amid concerns around public safety during the coronavirus pandemic.

Similar protest were held in other parts of Northern Ireland today.

"Three of these events – in Omagh, Newry and Portadown - were cancelled however the events in Belfast and Derry/Londonderry proceeded, contrary to the current Health Protection Regulations.

“Despite the cancellation of the Newry event, a small crowd did gather but dispersed quickly on our request.

“We conducted checks on travel routes and transport hubs across Northern Ireland today, requiring people to return home rather than travel to the unlawful protest gatherings.

"I believe that these actions had a positive effect on reducing the number of people attending the protests thereby protecting the public from the spread of the coronavirus.

“We estimate there were less than 500 people in attendance at each event and a significant number of Community Resolution Notices (CRNS) and fines were issued in both Belfast and Derry/Londonderry.

"A number of individuals, including organisers, will now be reported to the Public Prosecution Service with a view to prosecution. We will also conduct follow up enquiries to seek to identify others who may have committed offences.

“As I have said previously, in other times, we would have been working with the organisers and protestors to facilitate a lawful and peaceful protest to mark the avoidable and unnecessary death of George Floyd, however, these are not ordinary times.

"The Health Protection Regulations are in place to protect us all during this pandemic and it is everyone’s responsibility to adhere to them to protect our society.”