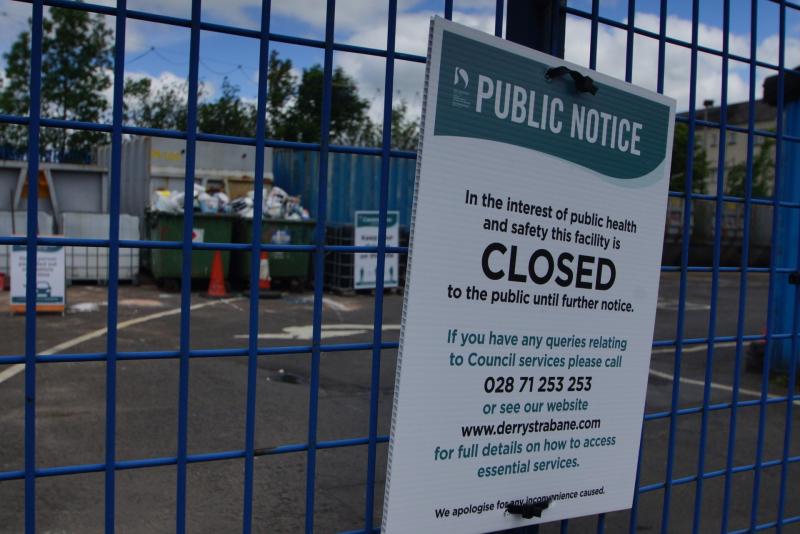 A booking system could be introduced at a Derry recycling centre which had to be closed this week because of the number of vehicles using it.

The Glendermott Recycling Centre was reopened recently after being closed in March because of the coronavirus lockdown.

The Waterside recycling centre is one of a number operated by Derry City and Strabane District Council.

However, it was announced on Tuesday that the Glendermott centre was being temporarily closed because of the high number of vehicles that were visiting the centre.

The decision followed a visit to the site by representatives from the Health and Safety Executive (HSE).

A council spokesperson said: “Whilst the HSE were satisfied with the operation and health and safety arrangements within the recycling centre, they had some concerns in relation to the high numbers of vehicles waiting to get into the facility and interactions with other businesses in the area.”

The council spokesperson said they have agreed to close the Glendermott centre n order to 'review the traffic management arrangements within the wider Glendermott complex'.

“Council are currently reviewing alternative arrangements in consideration of the HSE advice.

“Further details will be available later this week and in the interim the public are being encouraged to use Household Recycling Centres at Pennyburn, Claudy, Strathfoyle, Strahans Road, Donemana and Newtownstewart.”

Speaking at a meeting of the council's Governance and Strategic Planning committee on Tuesday, council chief executive John Kelpie said they are now looking at possible new arrangements for the Glendermott Recycling Centre.

He said that the issues were not with the operation of the centre, but with the impact that the high volume of traffic was having and could have on surrounding businesses.

Mr Kelpie said that one of the proposals being considered was the introduction of a booking system for anyone wanting to use the recycling centre.

Independent councillor Gary Donegan suggested that vans or trailers could be redirected from the Glendermott centre to a council facility at Strathfoyle.

Mr Kelpie said this was a 'very good suggestion' and was something that could be looked at.

SDLP Martin Reilly asked about steps to ensure that illegal dumping did not take place at the centre now that it was closed.

Mr Kelpie said that council officers would be monitoring the site to ensure that this did not happen.