Incoming Chair to focus on the economy

The Sinn Féin councillor has some experience of the role. 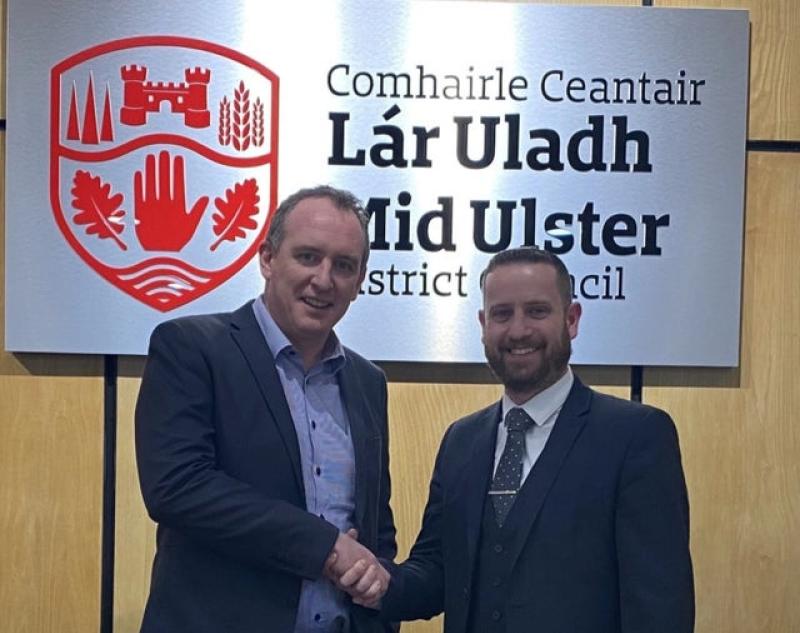 Cathal Mallaghan previously held the role after Linda Dillon was co-opted to the NI Assembly.

The incoming Chair of Mid Ulster District Council has pledged to make restarting the region’s economy in the wake of Covid-19 a priority for the coming year.

Cathal Mallaghan of Sinn Féin was appointed as Chair at last night’s AGM and he told the County Derry Post how he hopes to get the local economy moving again.

“Keeping people employed in work is going to be the number one issue. Without that you’ll see a lot of families struggling financially,” he said.

“In one of the recent reports, its showed that Mid Ulster would be one of the hardest hit regions because we are heavily dependent on manufacturing, so there’s a big task there.

“It’s going to be an important time to support our local community groups and our businesses to try and get everybody back up and going and restarting the economy.”

Cllr Mallaghan, a native of Pomeroy, Co Tyrone, is taking on the role for a third time.

He previously acted as a presiding councillor in the council’s initial ‘shadow year’ and also assumed the role for a brief period following the co-opting of Linda Dillon to the NI Assembly.

In what he describes as his first ‘proper’ year, he is hoping to continue the council’s reputation for building good working relationships.

“There is a good relationship between the councillors and the senior management team,” he said.

“The senior management team, led by Anthony Tohill, have a good understanding of what the council wants and how they see things moving forward.

“They have a good relationship with community groups and businesses on the ground, which is important when you’re trying to take projects forward.

“The parties in Mid Ulster Council work well together too, although obviously there is going to be a difference of opinion on issues.

“When it comes to supporting communities, or the likes of delivering the rural development programme, all the parties are on the same page and supportive of that kind of work.”

Cllr Mallaghan praised the impact of community groups in the region and said he hoped to help Mid Ulster Women’s Group on an ambitious project.

“Mid Ulster Women’s Aid want to build houses in Cookstown to further their work in protecting women who have been subject to domestic violence.

“If I could do something in these 12 months to take that forward and get the council to work along with them, I think that would be a great achievement.”

He also hopes to revisit the Maghera Public Realm Scheme and bring it to completion alongside similar projects in the region.

He said: “We had three very successful schemes in Dungannon, Magherafelt and Cookstown which are completed, and Coalisland is almost finished.

“Change is difficult for some people, particularly when you want to do what you can to improve our town centres, but I’m sure the Maghera scheme will be successful and people will be happy with it.”

“It’s going to be a very unusual year as chair, because of the way things are with restrictions and everything else.

“Hopefully when the relaxations begin to take effect later in the year, we’ll start seeing a bit more normality again.”

Other Sinn Féin councillors have also taken on key roles following the AGM. Brian McGuigan has become Chair of the Audit Committee, with Niall McAleer as Deputy Chair.